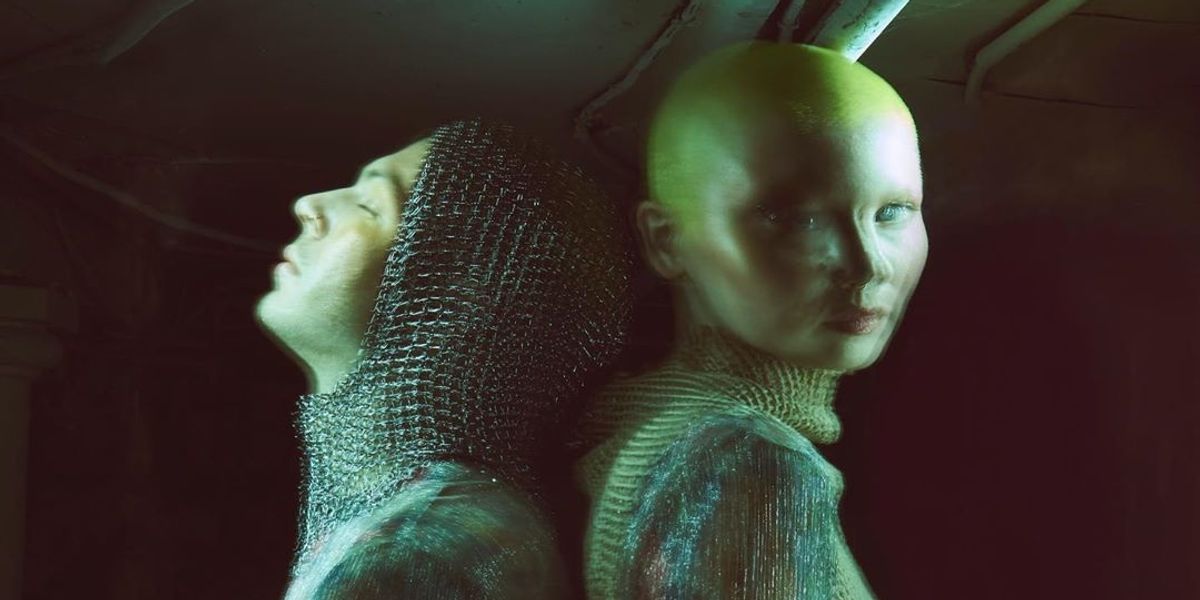 Spirit Twin on Their Celestial Music and 'Twin Flame' Bond

A "twin flame," or someone who enters your life and co-creates for the greater good, is an abstract idea for most. But what happens you meet someone you truly connect with, both romantically and creatively?

Brooklyn-based electronic duo Spirit Twin's bond is built on these values, and members Anna and Allen describe their fateful meeting as a union of musically compatible souls. Anna's angelic vocals complement Allen's expansive production to create a singular sound that feels truly out of this world.

This month, Spirit Twin released their self-titled debut album — a journey through enchanting synthesizers, haunting harmonies, and the many shapes of love. It's a collection of deeply personal tracks that recount the duo's many journeys together and separately. Throughout the project, Anna's voice is often edited at a higher pitch — an effect she said creates a "very innocent, almost fairy-like sound."

SPIRIT TWIN on Instagram: “Celebrating the album release with our new face filter 🧚🏻‍♂️ 𝓐𝓷𝓰𝓮𝓵 333 🧚🏻‍♂️ made in collaboration with @una_blue 💙 The song in the video…”

When creating Spirit Twin, Anna says the duo began to "come into themselves." She continues, "The album was a journey that Allen and I went on together. It's about our relationship, but not entirely about love. It's more about finding yourself. Throughout the songs we tell a story about certain adventures we've gone on or different situations that surround love, self-love and self-care."

The album opens with "Just a Dream," a contemplative, hazy track that Anna says formed the remaining songs' production. Another highlight is "Stone Fortress," which features Anna's natural singing voice — an airy, ethereal soprano with eerie synth melodies supporting it. The album's closing song is "Fields in the Rain," a six-minute effort that perfectly captures Spirit Twin's synthesized sorcery. On it, Anna's piercing vocals escalate from slow and brooding croons to explosive, abrupt shrieks and laughs.

The album art, shot by Andrew Boyle, pictures the duo standing back to back in order to capture their equality and creative partnership. "For Spirit Twin and what we do, everything is equal," Allen says. "Both Anna and I do production, we both sing on all of the tracks. This matriarchal element is visible in the album cover and that brings everything together for us."

SPIRIT TWIN on Instagram: “Our debut album is out today!! Feeling so incredibly grateful for this journey and all the people who made our dreams a reality. Today is a…”

For inspiration, Spirit Twin finds it in everything from Zelda video games, which are sampled in the album, to their home, which is adorned with "crystals, plants and tarot decks."

Fittingly, their home is where the music is made — a reflection of Spirit Twin's intimate sound. "The environment feels very warm and it definitely affects what we do musically," Anna says. "We're independent, so we created ourselves at home. We bounce ideas off each other constantly, so the music comes out genuinely."

Spirit Twin will be playing their new songs live on March 16, with a set at Berlin Under A in Manhattan's Lower East Side neighborhood. Stream Spirit Twin, below.