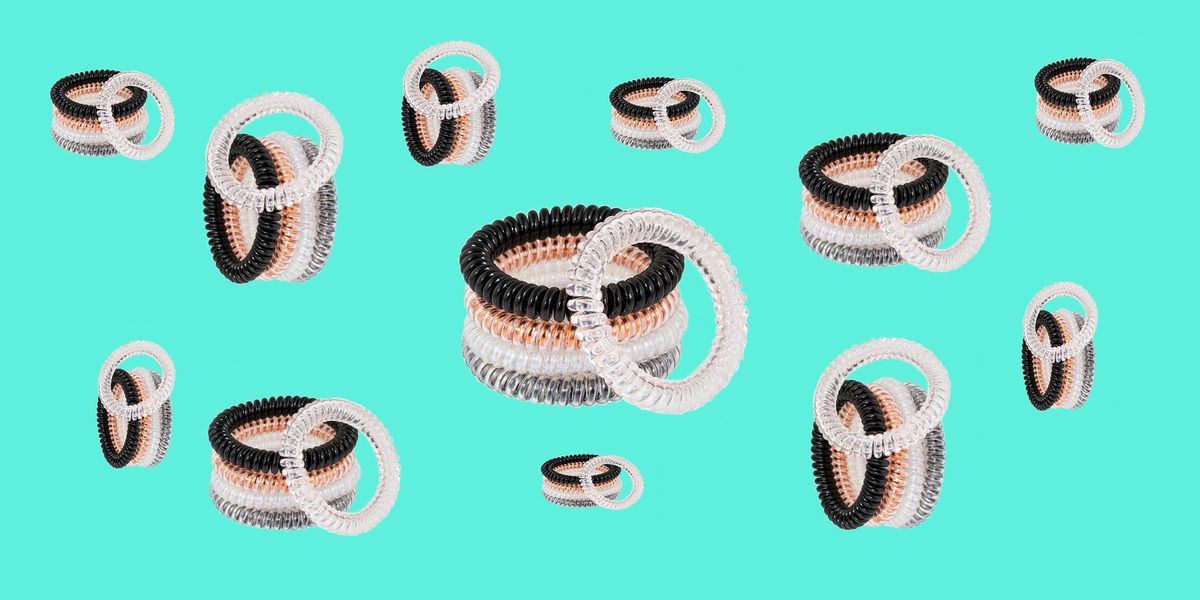 A Deep Dive Into the Spiral Hair Tie Trend

Like Poppy Lissiman sunglasses, too-tiny-to-really-hold-anything bags, gold hoops and furry mules, the spiral hair tie has achieved what seems to be overnight celebrity. You know the look — it's that slinky-esque band that's suddenly become the choice hair tie of those in the know. This wacky trend is up more than 2,000% on Pinterest compared to last year and Google Trends shows the style is being searched 400% more in 2018 than 2017.

In a world where the average American checks their phone nearly 46 times a day and many people find new stuff to buy while down an Instagram rabbit hole, it seems likely this rapid virality was sparked by an elaborate influencer campaign or, better yet, a cameo in a celebrity selfie plastered all over the Internet. But evidence suggests otherwise.

Despite this trend feeling like it came out of nowhere, Invisibobble, the product that first pioneered the style, was introduced to the market a solid six years ago in Germany. Its creator, Sophie Trelles-Tvede, landed on the idea for Invisibobble while studying at Warwick Business School in the UK. According to her, it was a total accident. "I went to a 'bad taste' party one night hosted by the university... I put on really ugly makeup and I was about to leave my dorm room to go to the party and I thought, I actually hadn't done anything with my hair. I had one of these old emergency telephones in my bedroom from the '80s. I thought I could unclip the cord and put it in my hair. So I did that and went to the party." The next morning, she woke up without a headache or hair crease from the makeshift hair tie and the concept was born.

Over the years, the style has gone from party joke to international sensation. Women from New York to Los Angeles to Paris to Beijing have reported seeing the spiral hair tie on other women in their communities, worn everywhere from the office to a night out. But why did this particular hair tie become so popular and why did it take six years to start seeing it everywhere?

Hair ties have an interesting history of faddishness. They've been trending for decades, stylistically morphing to fit the look of the moment. "Makeup, nails and hair are great ways of temporary self expression, and usually a lot less expensive than fashion, so we are always looking for something new," says Jane Buckingham, trend forecaster and founder and president of Trendera, a consumer insights firm focusing on generational research. The accessibility of hair accessories make them a breeding ground for trendiness. And the archives prove it.

The '60s gave us Brigitte Bardot with her headbands, scarves, ribbons, and, of course, colorful proto-scrunchies. The French actress took styles that, while not necessarily new at the time, were suddenly seen in a different, chic-er context, inspiring millions of others to follow her lead.

Fast forward to the '80s and '90s and you have the official debut of the scrunchie as we know (and love) today. The silky style oscillated between high and low and was worn dressed down (paired with baggy jeans and t-shirts in high schools everywhere) and up (take Naomi Campbell at the Todd Oldham show in 1996, for example). The scrunchie has since become a kind of nostalgia symbol, representing a time of acceptable kitsch.

Related | Is Naomi Campbell the Most Powerful Person In Fashion?

The classic elastic many still wear today, often appearing in black, brown or blonde to blend with your hair color, was made popular in the millenium. Equally as popular were the tiny, rubber band-like elastics (resembling those micro-rubber bands kids wear with braces) that were worn to minimize the appearance of a hair tie at all. The scrunchie craze, meanwhile, dipped in popularity, shifting from mainstream to niche and finding a home in the world of gymnastics, cheerleading and, of course, retro Halloween costumes (see: Bring it On).

The 2010s brought a new style – the ribbon hair tie. This trend brought a punch of color and allowed consumers to personalize their ponytail holders, bridging the gap between necessity and accessory.

The Emergence of the Spiral

Like those ribbon ties, the spiral hair tie similarly functions as both utilitarian hair piece and playful accessory on your wrist. "I use the spiral hair tie because I like that you can wear them on your wrist and have them look nice when you go out," says Hannah, a 25-year-old product manager living in New York City. "It totally fits the casual-cute-kitschy thing that's been happening." And, unlike the scrunchie which signals a certain look (especially in 2018), the spiral's style is somewhat aesthetically neutral. It's just a piece of interestingly shaped plastic made in multiple colorways, which makes it attractive to a wider range of consumers.

It's this subtlety that perhaps explains why it's become an item many people say they first started noticing IRL rather than on social media. Unlike ombré hair color or wild nail art, the spiral hair tie does not innately lend itself to clicks and likes. Additionally, the longevity — and saturation — of a hair tie trend also means that when things start to shift from, say, scrunchies to black elastics or black elastics to spiral ties, it's more noticeable. Seeing everyone wearing ribbon ties or black bands on their wrists to suddenly feeling like everyone is sporting the spiral tie may grab peoples' attentions more than any new flavor-of-the-moment lip shade or nail art since those areas generally see many more trends and variations happening all at the same time at any given moment, making it harder to discern when a big change is underway.

"I feel like I just suddenly saw girls wearing one on their wrist at shows," says Pam, a 25-year-old Los Angeles musician." Margot, a 24-year-old business analyst living in Dallas, had a similar IRL discovery point: "When I was visiting Paris a few weeks ago, I couldn't believe how many spiral hair ties I saw on stylish French women. They were even being sold at & Other Stories on Rue Saint Honoré."

Word of mouth especially makes sense for a utilitarian product. Before adoption, it begs the question, "does this actually work?" Invisibobble's Trelles-Tvede anticipated this with her international roll-out strategy, especially in the US market. The product was introduced to American consumers by Sephora in 2015 and subsequent years brought more distribution in both prestige and mass stores. But while the brand's retail footprint was solid, she still looked for ways to spark peer-to-peer reviews as part of her marketing campaign: "I think, at the end of the day, it comes down to word of mouth. If you look at market research from the US, still the source of getting information about new products that is most trusted is friends and family... That's why we do sampling rounds so often," Trelles-Tvede explained in a phone interview. As more and more women started trying the product out for themselves or talking to their friends about it, they were drawn not just to the style but to the fact that the spiral tie is comfortable and won't leave that tell-tale ponytail crease in your hair.

So, could word-of-mouth marketing be making a comeback?

It's been estimated we see anywhere from 4,000 - 10,000 ads a day. Our digital lives are noisy, distracting and littered with brands vying for our attention via sponsored content posted by influencers. A friendly recommendation from someone you know in the real, physical world cuts through the clutter, offering truth and authenticity.

Ultimately, though, there are pros and cons of both word of mouth marketing strategies and ones that hinge on Instagram influencer support. While certain qualities specific to each product or trend may make one approach over the other more effective, there's another core difference between the two strategies that can be easily identified: time. Influencers have a swiftness that gives the feeling of immediate surround sound for a product or trend. They give brands and consumers alike a rush that only instant gratification can catalyze. Especially when you see the likes pour in in real-time. "Previously we would see trends on the runways or in magazines... Instagram brings it all at once. You see the trend on the runway, then on the Kardashians or some other celebrity, then an influencer who feels more relatable," says Buckingham.

But data shows that the Instagram algorithm is limiting content exposure more and more as the digital space gets saturated with stuff. According to Sprout Social, a popular social media management company, nearly 70% of Instagram posts are not seen. The 30% of photos that do have been identified by the algorithm as more likely to get double tapped or commented on when surfaced in your feed. Thus, the shelf life of a trend propelled by Instagram influence is likely short and there's always the next new thing on the heels of your success.

Word of mouth, on the other hand, is far more elusive. There's no digital trail, making it frustrating for modern marketers who have precision on their mind. To the consumer, through, a trend discovered offline is far more exciting. It brings the same warm and fuzzy feeling as an inside joke. It makes you feel like you've uncovered something new – and first. Even if this is fundamentally false. "PLEASE tell me how did the spiral things get everywhere overnight?! I feel like I just suddenly saw everyone wearing one on their wrist," says Arielle, a 28-year-old working in tech and living in Brooklyn. Arielle's experience of the spiral hair tie seeming to come out of nowhere is shared by lots of people in the States but, as we know from Invisibobble's history, it's also factually incorrect. Compare Arielle's experience it to Mariam's, who first discovered the hair tie while working in China. "I started using them when I came to China to teach English in a small city in 2012," Mariam says. "It's what all the girls and women used!"

If the spiral hair tie trend teaches us anything it's that in a world of algorithmic prediction, trendiness is still mysterious and sometimes a slow burn. Despite our digital-age crave to quickly quantify — likes, hashtag uses, repins, impressions, retweets — the life of a trend isn't that straightforward. There isn't always one viral moment that turns a thing into a thing. Sometimes the rise is slow and steady, difficult to track and propelled by individual offline experiences that accumulate to catalyze a wave of new. The spiral hair tie is proof there's still a puzzling quality to how (and why) things take off. And, as someone who seeks to create a trend, you need to consistently throw things at the wall to see what sticks with audiences. Style is still more art than science even in 2018.

Isn't that kind of a relief?