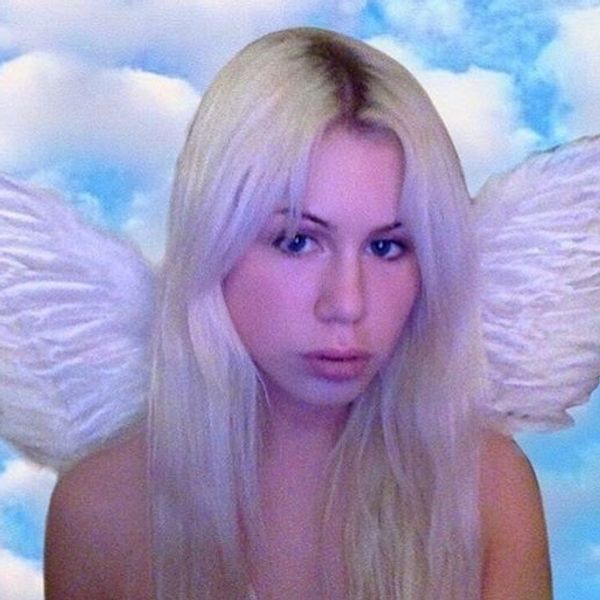 Remember Spring Breakers? Of its most memorable moments is a heist-driven montage featuring the main cast, set to Britney Spears' 2004 ballad "Everytime" — a surprisingly tender song that has always stood out within the superstar's canon of club bangers. In this scene, the song's poignancy took on a sinister new meaning — not inaccurate, considering the mounting buzz of the #FreeBritney debate (a conversation about Spears and her well-being).

On the heels of this comes a new revision of "Everytime" that hearkens back to the original's intent and prescience — this time by none other than Britney Spears-indebted rising pop artist, Slayyyter. And let's just say, it is quite the pivot from the maker of "Daddy AF," showcasing a vulnerability we've yet to see from Slayyyter until now. She's singing fully and passionately over twinkly electronic harp, staying loyal to the original, even down to certain ad-libs.

☆ slayyyter ☆ on Instagram: “i have a surprise for you thursday at midnight...!!! collage by @revolvingstyle !!! ****edit: its not my album that is coming before tour…”

So of all Spears songs for Slayyyter to cover, why "Everytime"? "It's such a beautiful and sad song, one of my all time favorites of hers," she tells PAPER. "I chose it because it relates a lot to how I have been feeling lately. It's sorrowful, apologetic, but also has an underlying theme of feeling small and helpless. I think everyone feels that way sometimes."

Considering the initial meaning of "Everytime," and how it has changed over the years, Slayyyter says that at the time, the song was "definitely known to be about her breakup with Justin Timberlake, but I think know it holds even greater significance."

Slayyyter alludes to the #FreeBritney discussion, saying that "Everytime" was possibly a warning of how small and helpless Spears felt when the song was first written. "Britney sings about feeling like she can't escape someone or something... I think it tells a bigger story now," she says.

Since Slayyyter is so inspired by Spears, she explains that choosing "Everytime" was a less obvious choice for the emerging pop star. If she had her pick of which Spears song is closest to one of her own, she'd choose "Boys" or "Gimme More."

"They both definitely inspire my music the most," Slayyter says. "But let me go on record to say I could never write anything as good as either of those tracks! No one can ever do it like Britney."