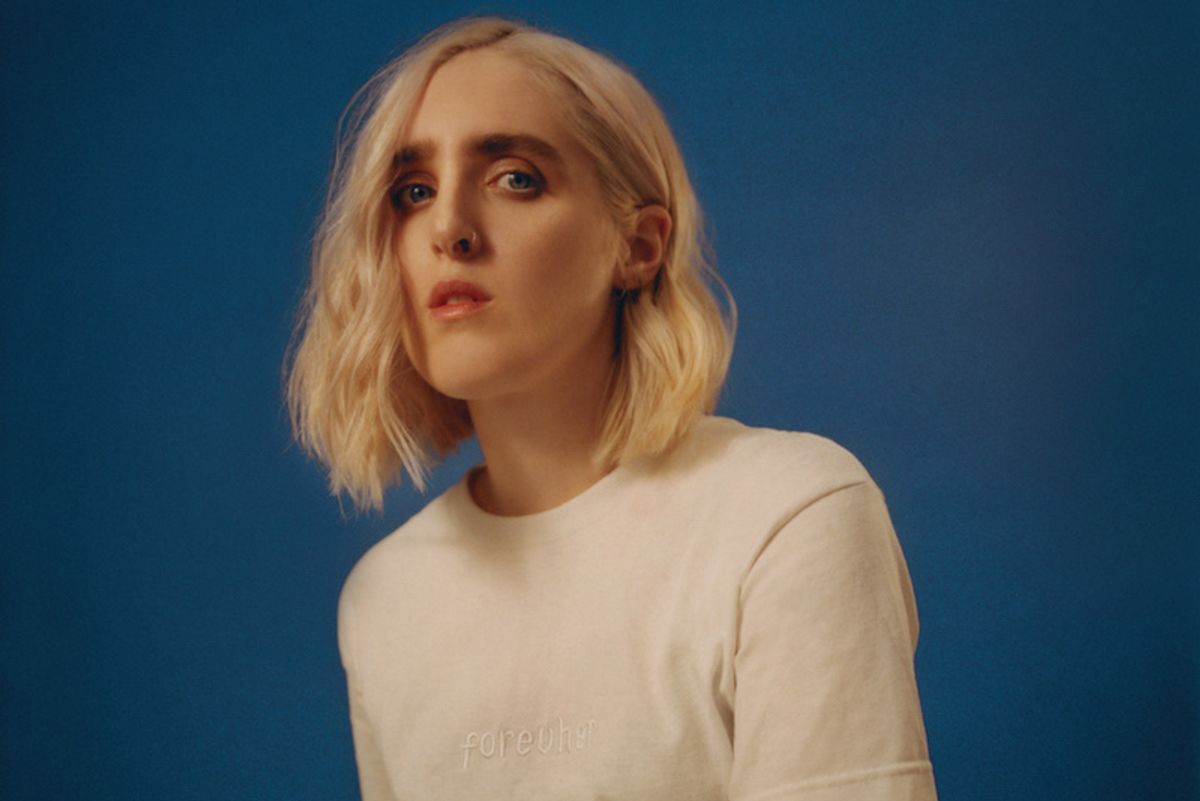 When I first met Shura, we almost immediately started talking about death. Yes, we exchanged the usual small pleasantries and gushed about the weather in New York, even though it felt like a boiling pot of water to most people on that late July day. But as soon as we sat down on a Brooklyn park bench, the conversation quickly veered into the topic of dying, or more specifically, Carrie Fisher's death.

The death of the Star Wars icon was a surprising influence on the British singer's sophomore album forevher, specifically on the sparse, forlorn ballad "princess leia" (stylized lower case). Fisher's health scares first started on a plane, and Shura found out the news of her death after landing in Dubai, about to jump on another flight to Australia. It was a mere coincidence, but one that inspired Shura to write a song about her own death.

"I spend a lot of time thinking about people dying. And it's like, 'Well, hang on a second, I should just fucking enjoy that they're alive'," she remarked. "I tried to do some prep with Carrie Fisher, because it looked like she was going to die, and then still, when I landed in Dubai, I was just like, 'What the actual fuck? How is Princess Leia dead? Why? What?' Death is just… it is such an absurdity. I remember my dad saying, 'Death is absurd,' that one second you're on, and the next second you're switched off, and it's like everything that you are is gone."

Aside from "princess leia," forevher sounds like the exact opposite of death. In fact, the album feels somewhat like a rebirth. It tells the story of Shura's burgeoning romance, from the moment she first met her current girlfriend on, where else, a dating app, to the day they moved into a Brooklyn apartment together. Sonically, she dives into Janet Jackson-esque funk grooves, '70s soul melodies, and ethereal soft disco ballads that carry a sense of self-assuredness. And while her nerves are sometimes palpable in the words she sings, she has an anxiety that appears to propel her forward, rather than completely shutting her down.

It's a far cry from her debut record Nothing's Real, a psychedelic '80s synth-pop album that perfectly captures the feelings of dealing with crippling anxiety about literally everything, even anxiety itself. "I remember having this conversation with my therapist about the idea of me being an anxious person, and her asking the question of, 'Do you think there's a part of you that's trying to hold onto that as an identity? That maybe that's not true of you," she explained. "Maybe you're not an anxious person, and maybe you need to let go of this narrative that you've created for yourself.'" Her willingness to put her love life on display so confidently on forevher shows that while Shura's anxieties may still linger, the narrative is gone.

Shura was in Minneapolis writing music when she connected with her current partner, Pauline, who is based in New York, on Raya. Their sporadic DMs turned into iMessages, and their daily texts into lengthy late night phone calls. One day, Pauline urged her to stop in New York before she headed back home to London, but she was hesitant. "I was exhausted. I'd spent two months touring the States, so I had eaten my way through 50 chicken fried steaks, and McDonald's," she explains. "I wasn't feeling good about my body. I didn't want to turn up and all my pictures were these amazing press shots, and I'm, 'Hi,' and [she's like] 'Oh, you look better when you have hair and makeup.' Well, of course."

Eventually, she simply said "fuck it" (literally) and flew to New York, booking a bougie luxury hotel and calling her friends to be on standby in case things went haywire. They had their first date at a show headlined by MUNA, the queer pop band of the moment. Her friends weren't needed. They quickly entered an official long distance relationship, flying across the Atlantic to visit each other. Some people would see this as a struggle, but as Shura kept writing every new step they took, both together and thousands of miles apart, into song, she found their time apart to be a valuable asset.

"So much of the album was written about a relationship where we couldn't always touch, so when we did, that was so exciting," she explained. "It's having that longing, and that separation, and the text messages, and back and forth. And also, just going back to that thing of being a kid and remembering when you brushed hands with someone, you'd literally be like, 'Oh my God. I'm so excited. This is the most incredible thing.' And I think, sometimes, the best part about relationships is that question of, 'Is it going to happen, is it not going to happen? Does she like me, does she not like me?' And then, discovering that."

In another ironic twist, the hypnotic and slightly unholy "religion (u can put your hands on me)" was written when she quite literally couldn't put her hands on her crush at the time, even though she would've done anything to do just that. "The way that we talk about love and sex is often very similar words to the way we talk about faith," she said of the song's inspiration. "The idea of devoting yourself to someone is sacred, or the act of worshiping. People lay their hands on people to heal them, or to bless them, or to baptize them, and that's what we do in love. We touch people with our hands."

On forevher, Shura tracks every step of their journey with precise detail and whimsical imagery, from that fateful first date on "the stage," to facing her fear of planes on the wistful R&B-jazz number "flyin," and finally committing to forever (or as close as you can get to it without marriage) on the anthemic title track. The result is a time capsule of powerful, healthy, all-consuming love, undoubtedly a huge victory for any queer person. The finale "skyline, be mine" only has two short verses, but the message is clear: their bodies, hearts, and souls now belong to each other.

The idea of sexuality has been a near-constant in her life, even before she realized her own. Shura was born Alexandra Lilah Denton in Manchester, England, just two minutes before her twin brother Nick, who is also "a flaming homosexual," as she described. "My dad always jokes that my brother came out of my mum and just had this face of, 'I never want to go near one of those ever again,'" she remarks, imitating his disgusted baby face.

Her parents gave the twins a very normal upbringing, and both were very supportive of Nick's sexuality, and later hers. Her dad, especially, made it super easy for them to come out. "My dad had said to Nick, at some point, he'd found gay porn on the history or whatever, and just was like, 'Look, should I just assume you're gay until you tell me you're straight?' to my twin. And he said, 'Yeah,' which is really great, because you don't have to say the words, 'I'm gay,' which is really scary for a lot of people," she recalled. "And then at one point, I just had a friend who was coming around a lot, sleeping over a lot, and my dad just went, 'Shall I just assume that this girl is your girlfriend?' And I just went, 'Yeah.' It was really easy."

While coming out was simple when Shura discovered her sexuality, it took a lot of time to realize that she could even be attracted to women. When her friends started to crush on boys and put on makeup, she still paid no mind to love and wanted to play football, simply thinking she was just entering puberty later than everyone else. She then convinced herself that she liked boys by latching onto their conventionally attractive looks and intellectual abilities, but she still felt nothing physically. But one touch changed everything.

"I had a friend at school who I had this very intense friendship with, and we were sat in the cinema," she recalled. "I think, she put her hand on my leg, or my hand on.... We brushed hands. It was, literally, an explosion, physically, emotionally. And, I was like, "What? Oh. I get it. This is what being sexually excited feels like.' So, I just went, 'Okay, maybe, I'm attracted to both.' I didn't really know what was going on. We ended up having this relationship, and I decided well, I must be bisexual because I'm intellectually attracted to men. I can find men attractive." Slowly, she came to realize that she just doesn't find men attractive, and the electricity of simple things like brushing hands and accidental touches remains pervasive in her lyrics today.

While forevher is unique in how it tells a story of triumphant, all-encompassing queer love with great precision, the album feels much less isolated than Nothing's Real did with the canon of LGBTQ artists getting much larger in the past couple years. "I'm just really excited for young queer people who are growing up with the internet, who can Google non-binary Black and queer musicians, and there's a wealth of them who are current — not just legacy artists like Melissa Etheridge and k.d. lang. There's people making the kind of music right now that they would also want to listen to and buy all the merch and do all that kind of stuff. That's exciting."

Before we part ways, I asked Shura if this love is truly 'forever'? "I feel like every relationship when I'm in it is forever," she said. "That's how I love. I couldn't be in a relationship if I didn't think it was forever." Regardless of how this turns out, the music will surely live on.