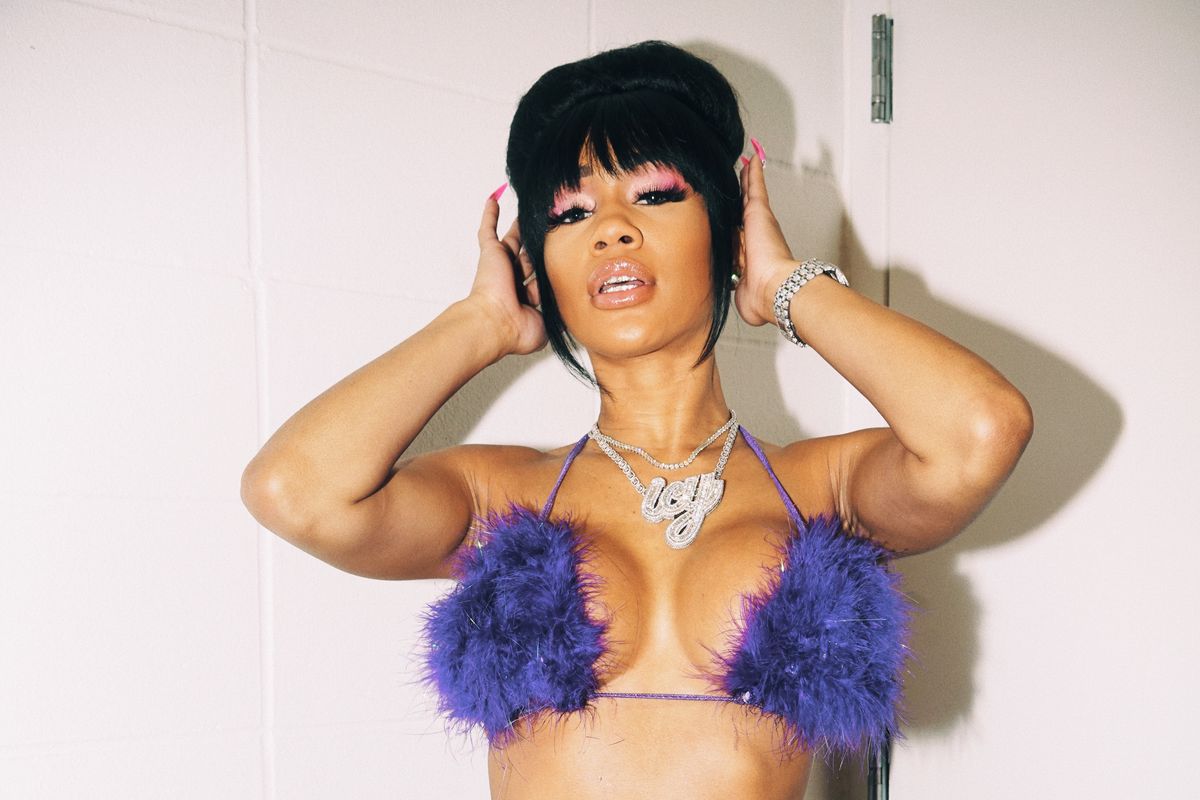 California rapper and style icon Saweetie's tour outfits are my type! After gaining notoriety for her song "Icy Grl," a stream-of-consciousness freestyle over the backing track from Khia's infamous "My Neck, My Back," Saweetie became the newest name to know in the rap game. The songs off her sophomore EP, Icy, practically invite viral success. Her newest hit, "My Type," is heating up on the charts, but more importantly, it's also heating up on TikTok. In order of importance, that's major.

Success in tow, Saweetie embarked on a tour of epic ass-shaking and turn-up anthem proportions. Coordinating the setlist and choreography for the shows was the easy part, though; for an Icy Grl, it's all about the fashion direction. Saweetie had several unique visions that she wanted to execute fully when it came to creating her tour outfits. "For this tour I wanted to have fun whether it was hinting on future 'Icy by Saweetie' merch or paying homage to a tour city," she says of the initial conversations around the tour styling. "When I went to Nebraska, because my paw paw was an All-American football player there, I showed love thru custom cheer and football uniforms. For the next show in Minneapolis I wore purple for Prince."

Saweetie credits her stylist, Sankara Xasha Ture McCain, with helping her bring these visions to life. "Each night was a special night because my vision would come to life and each outfit was made by an up-and-coming Black designer," she states. "I was proud to support my people while looking fly on stage." Sankara was instrumental in building, sometimes piece-by-piece, the looks for Saweetie.

Sankara sat down with PAPER to talk about some of her favorite looks from the tour, and how a glimmer of inspiration can turn into a full on outfit overnight.

"We wanted to kick off the tour in high gear. What better way to represent this than by curating a cheer theme? Growing up in the early 2000s, Bring It On was a major staple for the generation. I partnered with designer Khala Whitney of @fromgrayscale to create our own version of the Clovers, but in a more mature way. We came up with the concept 'Icy University,' playing with the representation of the 'Icy' colors — baby blue and white — and of course we had to represent the culture by adding the detailed elements of bandanas and bling."

"Before I began creating concepts for the tour, I spoke with Kendra Jae about ways to set Saweetie and her dancers apart from the average artist and dancer set. She mentioned Destiny's Child, and loved how they were all cohesive yet stood apart. I immediately thought of the 'Survivor' video. I partnered up with Domo Zillionaire of @fadednyc_official to curate one of a kind looks for Saweetie and her dancers. The aspect that really set this look apart was the 3M reflective Camouflage that reflected once the light hit it."

"Sacramento was special! It was Saweetie's hometown. I knew we had to go out with a bang. Literally two days before the show, a colleague from my alma mater hit me up showing me her sister's reconstruction work. It was literally a sign from a higher spirit, @jusbtv reconstructed a Sacramento Jersey into a two piece set and whipped out 4 two-piece 'Sactown' sets from black jogger pants in two days. She was a lifesaver!"

"Saweetie mentioned she really loved the Sport and University-themed looks so we scratched the upcoming look that was planned and thought of ways to represent the next city we were in. Literally hours before showtime I found the nearest team store and created a vision of making the dancers a part of the football team and having Saweetie as the cheerleader for Lincoln's most popular team, the Nebraska Cornhuskers. The greatest thing about this last minute concept is that Saweetie's grandfather actually played for the team when he was in college, which made it that much more special!"

"When traveling to Nebraska, I had a layover In Minneapolis, Minnesota. In the airport was a new Prince store that captured my attention. I knew Minneapolis was a next stop, so I immediately suggested a Prince-themed tribute to pay homage to the legend. In the middle of the show I went to the nearest Hobby Lobby and purchased every purple and white boa they had. I wanted Saweetie to rock a two-piece purple feathered set and make the dancers Prince's angels by placing them in all white. I pulled an all-nighter with this DIY feathered bra project."