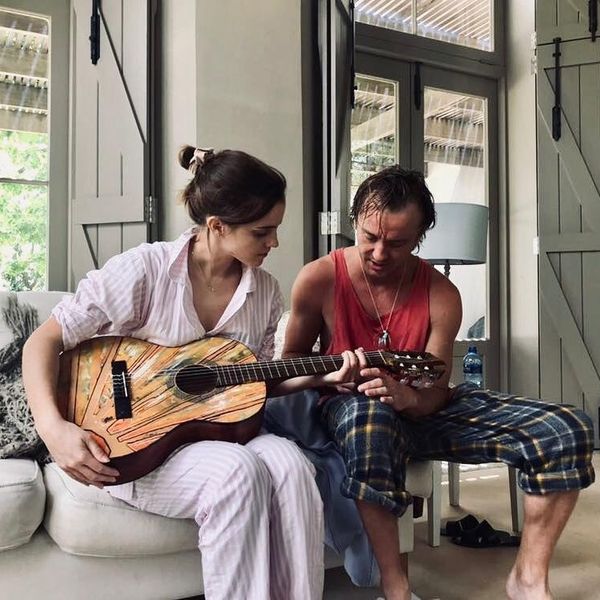 Earlier this year, a tantalizing photo graced our feeds. Tom Felton and Emma Watson, former child co-stars, are huddled cozily together in pajamas, their fingers grazing as Felton adjusts Watson's hand on a guitar fretboard. The photo, from August, was geo-tagged in South Africa and posted to Felton's Instagram with the flirty caption "Quick learner x." Watson followed it up with a post of the duo on the beach, congratulating her "dear friend" on his new sci-fi web series Origin.

We still don't know for sure, but bless his heart, Rupert Grint has confirmed that Felton and Watson's flirty vibe was a reality on-set back in the day. "There was always something," the actor told ET while doing promo for his new AppleTV+ series The Servant. "There was always a little bit of a spark."

Prefacing that he didn't want to cause any drama, Grint continued: "But we were kids. It was like any playground romance." As for him: "I didn't have any sparks. I was spark-free."

If Felton and Watson are seeing each other, they're not doing so publicly. The December cover star for British Vogue, Watson recently made headlines describing herself not as single, but rather as "self-partnered."

Are fans finally getting the real-life Harry Potter romance they deserve? Tabloids will tell you that Watson has dated all her male co-stars at various points, but as far as we know, none of the core Harry Potter cast members ever dated. Ginny did have a romance with Jamie Campbell Bower, who played young Grindelwald, and there was the whole Helena Bonham Carter-Kenneth Branagh-Emma Thompson triangle. But that's nowhere near as fun as Dramione.