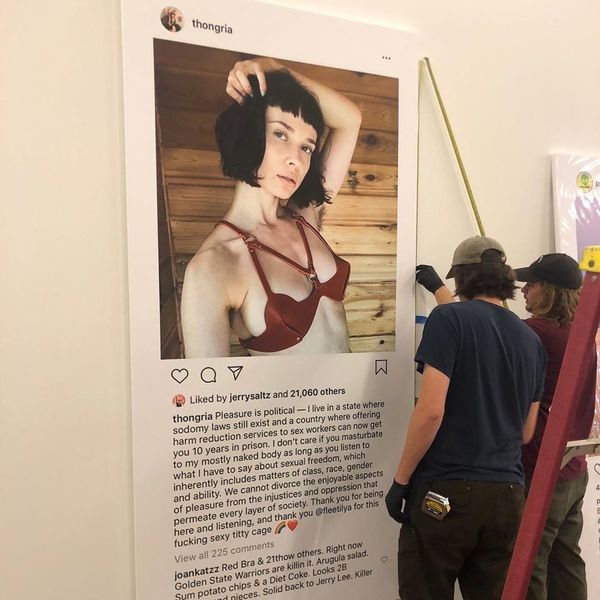 Painter and photographer Richard Prince has once again come under fire for his questionable methods of repurposing (and profiting from) non-consenting people's Instagram photos for his work, reports Artnews.

Zoë Ligon, a Detroit-based sex educator and owner of a sex toy shop, is the author and subject of one of his latest repurposed Instagrams. She's protesting the use of her image and her art in Prince's new show "Portraits," which just opened at the Museum of Contemporary Art in Detroit.

Appropriation has long been a method and a subject for Prince. He's often provoked copyright complaints with his use of used advertisements, magazine shoots, book covers and the likes. His work often changes these mass media images in subtle ways that's been termed "rephotography."

In 2014, he debuted his first Instagram "rephotography" with an exhibit called "New Portraits" at the Gagosian gallery in NYC, and later at 2015's Frieze Art Fair in NYC. "New Portraits" included blow-up prints of random photos off Prince's feed, embellished with strange, absurd and sometimes creepy comments left from his account handle.

Photographer Eric McNatt previously sued Prince over "New Portraits" for including a shot of Kim Gordon he took for PAPER's 30th anniversary issue. The account @suicidegirls also retaliated against one of their photos being sold by Prince for $90,000, selling their own versions for charity for $90.

New York Magazine art critic Jerry Saltz (who appears as a "like" on the Ligon piece in the exhibit) is a notable supporter of Prince's. "Artists use materials. Images are materials," he wrote after the first "Portraits" controversy.

"I didn't consent to my face hanging in this art gallery," Ligon wrote online about the latest exhibit. As a survivor of sexual trauma, she explained that Prince's work feels violating. "Part of the reason I take 'sexy selfies' is because I am reclaiming my own sexualized image. To see my image on the walls of MOCAD feels as though a picture I've taken of myself to reclaim my sexual body is being used to violate me all over again."

Echoing many of Prince's critics, Ligon questioned the value of the series, calling the piece "a reckless, embarrassing, and uninformed critique of social media and public domain....this isn't progressive, this isn't even subversive. Maybe it was when he began doing this in 1977, but in 2019 it's tone deaf."

She also asked MOCAD "to make a large donation to Sex Worker Outreach Project since this is a post about criminalization of sex work and harm reduction." She added, "I'm not looking for personal justice, more so larger scale change and accountability."

MOCAD's director, Elysia Borowy-Reeder responded in a statement given to Artnews, defending the exhibit on behalf of cultural discourse, and claiming the museum offered to remove the piece from the exhibit.

Related | David LaChapelle on Climate Change and His 2020 Lavazza Calendar

"Like many contemporary cultural institutions, MOCAD has always been a space for the playing out of disparate and conflicting ideas," Borowy-Reeder said. "The point of the exhibition is to speak about these issues of ownership and ask these questions. This is a very relevant discussion. Is social media empowering people or co-opting artistic production? Where do our expectations and perceptions around privacy and consent lead us when using social media? What are you to consenting to when posting? Is all photography exploitive?"

"As soon as I learned of her concern I reached out and invited her to come and speak and share concerns," the statement continues. "We met before the show opened to the public at the Museum. We asked if she wanted us to remove the work from the exhibition and at the time, she said that she did not want it taken down unless we removed all the works in the exhibition. MOCAD has no plans to censor the entire exhibition."

MOCAD has planned a talk to address the controversy, lead by curator Brian Wallis.

However, Ligon clarifies in a statement to PAPER that the museum only offered to remove the piece after Prince had already shared it widely online. She also explains that removing the piece wouldn't address her concerns, given that it will remain in Prince's collection, and she take issue with all the non-consensually appropriated images used in the show.

Related | Robert Longo on Making Art in the Age of Trump

Ligon questions MOCAD's sincerity and methods for making, as they say, "space for the playing out of disparate and conflicting ideas."

"Having a single speaker who is a white man from New York is not an effective way to engage the Detroit community in a conversation about this," she says. "Had they curated the show with a diverse panel that included speakers outside of the New York art/literary world, it would have the potential to accomplish MOCAD's stated goals. Instead, they are hiding behind a boilerplate statement."

MOCAD's talk with Brian Wallis about Richard Prince's portraits will be held on Thursday, November 7. According to the event's description, Wallis will "present a public lecture on the Portraits series and its contemporary significance in the digital era of photography."