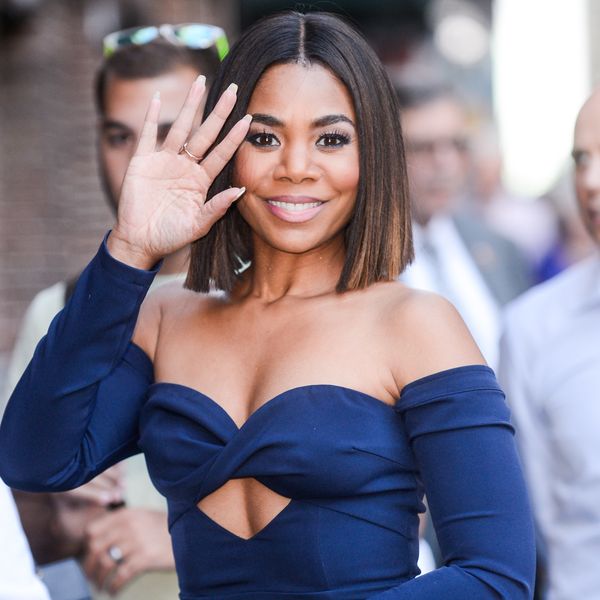 "Who bit Beyoncé?" It's one of the darkest pop cultural mysteries that our generation has had to come to terms with. Who would do it? Who could or would bite her perfect face? Why? By what grace are they still roaming this earth alive?

Most of us thought that the investigation had come to an end, but now Girls Trip and The Hate U Give actress Regina Hall is making us question everything.

It's been a minute, so let's review quickly. The hunt for the Beyoncé-biter began after Tiffany Haddish told GQ the story of how she first met Beyoncé at a party in Inglewood in December, where an unnamed actress allegedly "bit Beyoncé in the face." If you have not yet, please take time now to familiarize yourself with the remarkable anecdote.

Related | Tiffany Haddish and Beyoncé Are Still Friends After #WhoBitBeyoncé

After a long and trying investigation that included multiple scrapped leads (Taraji P. Henson, French Montana, Sara Foster, Jen Meyer), emotional denials, the guidance of Chrissy Teigen, Haddish signing an NDA over the incident and the slow process of narrowing down the guest list of the party one-by-one, we thought we'd gotten closure. In late March, Page Six "confirmed" via anonymous sources that the culprit was Love & Basketball actress Sanaa Lathan. Lathan, who denies of course, apparently — as human people often do in affectionate greeting — simply "playfully bit her on the chin."

Lathan brings us to Hall. Hall is a friend of both Haddish and Lathan, so in her recent New York Times profile, the Times' David Marchese did as any good journalist would and asked Hall what the hell went down.

"Let me tell you something: I could tap your leg with my foot and Tiffany would retell it as me kicking you." answered Hall. "She's a comedian. She can make a story, know what I mean? That whole thing took on a life of its own."

Hmm. On one hand, Hall knows Haddish better than you or I (sadly) and she is implying that Haddish is an unreliable narrator, and may have exaggerated the bite to the point of inventing it. This is a fairly rude thing to say, but also sounds like a remarkably more sane and comprehensible situation than someone literally biting Beyoncé Knowles Carter, notable ruler of an entertainment empire and a large and scary hive of stans, in the face in public.

But if it's true (that it's not true, keep up here), what the hell did happen then? Did Lathan just miss while trying to give Bey a peck on the cheek? Why was Haddish stirring the pot?

It seems it's back to the drawing board for #WhoBitBey truthers. But I'm beginning to think we may just have to accept that we'll never really know.