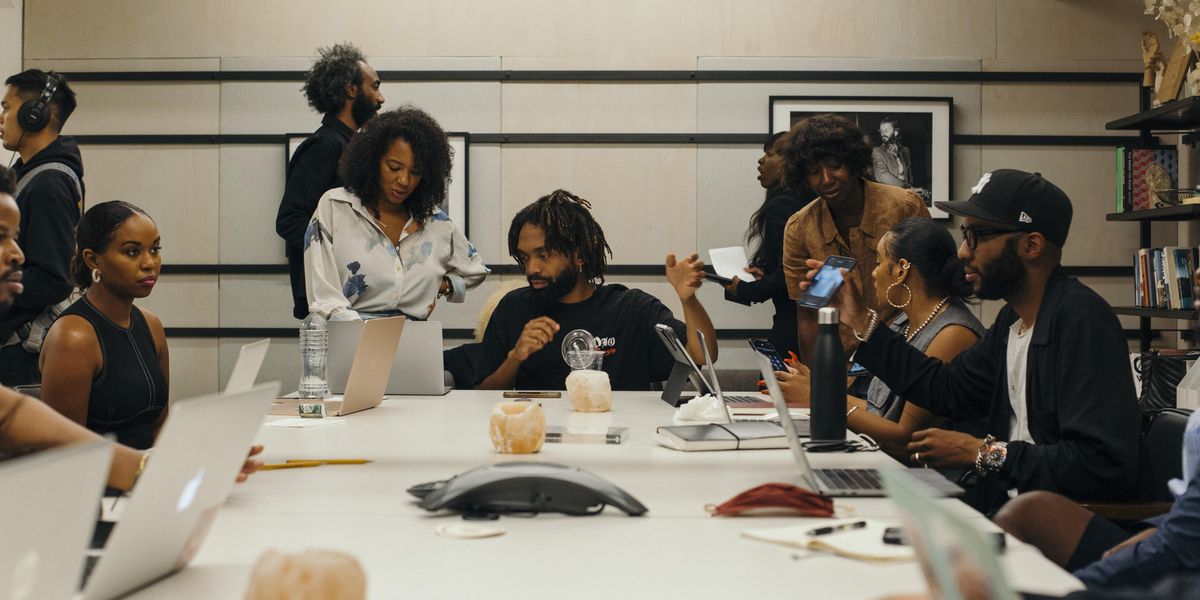 How the Pyer Moss Team Pulled Off the Near Impossible

As with any outdoor event planned months in advance, the risk of inclement weather is always something organizers are mindful of. But the unusual circumstances at Pyer Moss' first couture show last Thursday — held in the front lawn of Madam C.J. Walker's Villa Lewaro estate — took many by surprise.

Shortly before the 2 PM start time, the heavy rainfall wreaked havoc all across New York, with some parts experiencing massive flooding as a result of Tropical Storm Elsa. Outside the venue, guests waited it out patiently in the wet conditions, which alternated between light drizzles and biblical downpours. At one point, an emotional Kerby Jean-Raymond walked onstage to thank everyone for their support, with attendees bursting in cheers in solidarity with the designer.

At around 5 PM (still raining), while guests were huddled in a tent in the back with food and drinks in hand, an announcement came from the speakers that the show would be postponed for Saturday, with Jean-Raymond posting an update on Instagram along with news that some tickets would be available to the public.

All of a sudden, the team had less than 48 hours to pull off the seemingly impossible and figure out the entire model, musician, guest list, transportation and setup situation — most people I spoke to afterward said they were running on one hour of sleep, no exaggeration.

So what exactly went down between the first raindrop on Thursday and the ultimately successful postponed show two days later? Brittney Escovedo, founder of Beyond 8 (the event production firm responsible for most of Pyer Moss' past shows), took PAPER behind the scenes of all the conversations, planning and scrambling that took place in the hours leading up to Saturday's showcase.

Here, in her own words, is precisely what happened.

On the Threat of Rain Looming

The weekend prior, we knew that on Thursday it was likely there would be some rain but we were thinking a light sprinkle. I don't know if you came to Pyer Moss' "Weeksville" show a couple of years ago but there it just drizzled a little bit and it was beautiful. It added to the show. So we're thinking, Okay, we're going to prepare for a little bit of rain. So we had the tenting company come out and we got tents up for anyone that would be standing and we ordered a bunch of umbrellas, we ordered ponchos. That all happened Monday.

On the Possibility of Still Showing

We were drying off the stage, we had towels and all these things because we assumed it would rain. But the only problem was, although the models were already in the back and it was lit up in the front, all of the camera equipment was drenched and ruined. The audio equipment was prepared for rain but they had to recheck all of their lines and signals and make sure that everyone would actually be able to hear the show. We wanted to start, we were just trying to understand what the risk is. The other thing is, with the dancers, we didn't want the dancers to fail. We didn't want the models to slip and fall because their garments were so big, so complex. And we thought we would be able to start, we really did.

On the Moment They Realized They'd Have to Postpone

Finally, Kerby was just like, It's not happening, I don't know what to do. We can't wait for a 15 or 20 minute window. We need at least an hour and we need a clear sky. Let's just send everyone back to the cookout. Maybe we'll do it at like 8 PM. Even if no one's here. That's what he initially was thinking. So he sent everyone to the cookout and I went down to make sure everything was fine and everyone felt okay.

Then they called me backstage. It's a whole group of the internal team: Kerby, Nate, CB, Chanel, all the key players from PR, internal, model casting. Kerby asked me, What if we do this on Saturday, what would it take? And I'm like, Well, we need to redo the entire stage, the entire runway. We already had rentals scheduled to be picked up that night. We would have to replace them or bring them back. We need to make sure Elaine Brown is able to stay. I need to change her travel, see if 22Gz can stay, change his travel. We need to go to all the models, the performers, the dancers, the musicians, see if they're even able and available on Saturday. And then I said I do think it's possible.

The issue was that on Friday, it was raining again so we couldn't even work on Friday outside. We couldn't start until Saturday morning, which we started at 5 AM. We couldn't start rebuilding a stage, we couldn't couldn't do anything because it was going to be soaking wet. So we didn't want to chance it on Friday and then run the risk of everything getting ruined again. So then the question was time, how quickly can we get it up.

And this stage needs to be ready and done by like 1:30, 2 PM. So that only gave me from 5 AM to 2 PM to completely refinish an entire stage and runway, get everything sanded down and repainted. In addition to repainting, the soil was completely drenched and wet, and then what had to redo the seating, rebook new transportation shuttles for all of the guests, shuttles for all the hair and makeup team and ask if the hair and makeup teams were available to reconfirm for Saturday.

With the French Federation, obviously the time difference worked to our disadvantage. Initially we thought we could do Saturday's show at 5 PM. But that was too late to be listed on the calendar with them. And it really came down to how can we still be listed on the couture calendar and have Kerby be the first Black American designer to show for couture. The latest time that we could do that is if we had a 3 PM show, which meant everything had to be show ready by 2 PM.

Those conversations I wasn't in, that was really taken on by the Pyer Moss team and the Hinton Group speaking to the Federation. Obviously this was unexpected. It wasn't what we wanted. It wasn't what we intended. And they were kind enough to allow it, to extend by two days and to have a show at 3 PM. And we wanted to be as respectful as possible of that and start as close to as time as possible.

On Opening Up the Event to Members of the Public

The conversation around inviting the public is one that we always have. It's very important to Kerby that we invite them, whether it's students or people from the community. When we were planning the show originally, COVID guidelines were very tight and we were looking to have a very small attendance of like 200, maybe 300 maximum with seats being much more spread out. So we didn't really have the opportunity to invite the community and the public because it was just a small show. And then with us being able to have a few more people and us doing it again, he felt like it was some gesture that he wanted to offer. We ended up with 100 of them at the show.

A lot of people traveled in for Thursday's show, so not all of the same people could come back and attend on Saturday. I think that there was definitely some drop-off, but there was also some additional interest in coming on Saturday. The Hinton Group, they were in the office until three in the morning trying to figure out seat assignments. It ended up being that guests weren't assigned seats, they were just given their seat assignment at the door. They weren't able to get to a point where they sat everyone and sent out confirmations, so what we did that morning, we had seat assignments already reprinted so those went into production first thing Friday morning and we had those Saturday morning.

Those went on the seats and then the PR team duplicated those numbers onto small seating cards. So they knew if they handed it out, that seat was assigned. And then they wouldn't be double seating people anywhere. Because you only have one set of numbers to hand out, so it ended up working out really well. It was a very quick, on the fly decision of how to not upset people, but make sure the right people are in the first and second rows. And that ended up being the best we could come up with.

On the Changes to Cast and Crew

There were a bunch. From the performance standpoint, I think there were three string players that were replaced, which means they learned the music on Saturday. They rehearsed in the back by the cookout. Two singers also couldn't make it. There were also two models that had to be replaced, which means they had to be recasted. They were cast on Friday, refit, and garments are completely adjusted for new body types. Pyer Moss and the design team have been fitting these looks on these exact models for the last three-four months. So they were in LA, they were in New York, and they sewed them on their bodies. So that meant two of the looks had to be completely adjusted.

We had to supplement our live stream operator, our technician, the labor and crew that built the stage. The security more than doubled. Initially we had eight guards that were mainly just kind of making sure the house was okay. We ended up with 20 guards on Saturday just to really make sure that we were properly staffed and prepared.

On the Emotions and Community of Everyone Coming Together

It always comes down to the village and the community and the people that we have that support us. To me, this was an out-of-body experience. It was God moving through me. It was Madam CJ Walker speaking to me and fueling me with my ancestors, really making this possible. Logically, it doesn't make sense how we were able to do it, but it was greater than us. We were living out a historic moment that everyone present and alive today, and those that aren't with us, are really making sure happened. This was supposed to happen, it was supposed to happen in the sun. Also Pyer Moss always shows on Saturdays, we haven't not shown on a Saturday in I can't tell you how many years and it's something Kerby's adamant about. So the fact that it was Thursday, but by an act of God got moved to Saturday, I think was intentional.

I think that it really is a testament of resilience and dedication and commitment to something much greater than us. As a Black community of individuals, what we're doing is necessary, people have to see it. We put a lot of care and attention and heart and love into what we're creating. That's what showed up and that's what was shown and proven. And that's what people experienced and felt. There were so many Black women that were leads — our choreographer, our composer, the head of our video team, the casting director — so many incredible, really strong Black women lifted each of us up to create this.