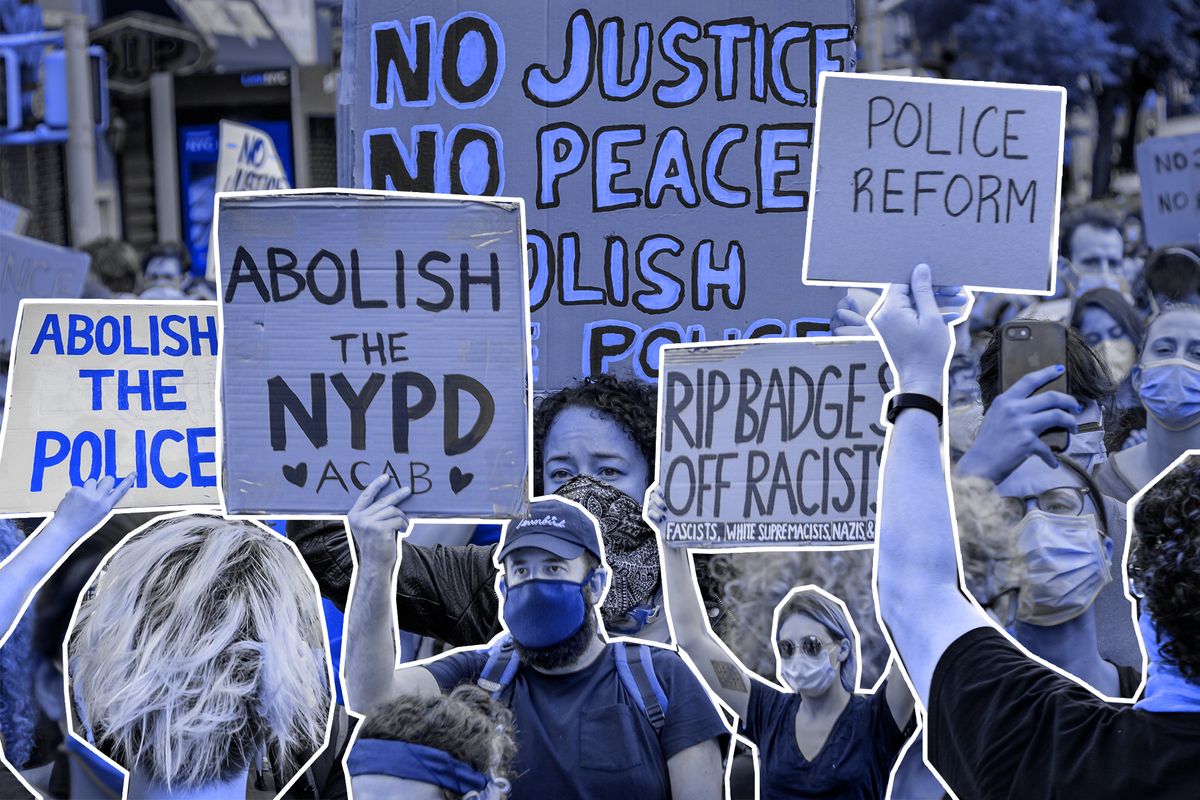 Today marks the 14th day of the protests that have erupted in nearly 600 cities and towns following the deaths of George Floyd, Breonna Taylor, Ahmaud Arbery, Tony McDade and other victims of police violence. The past two weeks already represent one of the broadest and most radical mass movements in American history.

Related | Reopen These Cases of Past Police Brutality and Negligence

People are taking to the streets for much more than an end to police brutality. The protests are about equity for Black Americans in the justice system, education, healthcare, workplaces, and all institutions. But dismantling white supremacy in workplaces or classrooms won't be complete or meaningful until Black people are safe going for a run or sleeping in their beds. This push to treat racism as a human as well as civil rights issue, with correspondingly urgent solutions, is one of the founding ideas behind the Black Lives Matter movement. Thus, the current protests are focusing on the police: perhaps the most dire threat Black people's safety as they go about their lives.

There's a divide between police reform versus abolition

It's unanimous among the protesters that cops involved in recent police killings should be convicted, and the officials who protected them should resign. But when it comes to saving the life of the next George Floyd, there's an ideological split.

Many believe that police reform — mandatory body cameras, implicit bias training and stricter use-of-force rules — is the way to end police brutality. But a rapidly growing number of protesters disagree. Many are taking George Floyd's death specifically as evidence that a reform approach has failed, and instead, for the police to be defunded and ultimately abolished. Floyd died in Minneapolis, one of the most progressively governed cities in the country, where expansive reforms were instituted after Philando Castile's death in 2016. There are different ideas about timeline, but generally, police abolition is based on the premise that police departments are inherently corrupt and racist, going back to their roots in slave patrols. In addition to a tainted history, advocates believe that because police forces attract violent people and due to the immense power police hold in city governments and via their unions, reform will never work. (In abolitionists' eyes, when officers ignore reforms and their superiors and local officials won't or lack the authority to properly enforce them and punish violators, that's the same thing as reform not working). Thus, all public safety spending should be shifted from paramilitary style police forces towards schools, public housing, social workers, mental health and addiction services, among other programs.

The movement's divide between reform and abolition crystallized when DeRay McKesson and Campaign Zero (a police brutality think-tank) unveiled #8Can'tWait, a set of eight reforms to reduce use of force by police. A group of abolitionists (find the authors here) quickly answered with #8ToAbolition, a set of steps towards a community safety plan that doesn't include police. The authors condemned #8Can'tWait as "dangerous and irresponsible" and calling it "a slate of reforms that have already been tried and failed," which "mislead a public newly invigorated to the possibilities of police and prison abolition" and "do not reflect the needs of criminalized communities."

Against the odds, the abolition movement is winning

McKesson has said he's advocating for reform because, as he told GQ, "police are still going to be here tomorrow" — AKA reform is more realistic. However, on Sunday, Minneapolis City Council made voted in a veto-proof majority to begin dismantling the Minneapolis Police Department. The Minneapolis Parks Department, the University of Minnesota, some local museums and the public school system have all independently severed ties with the police. Los Angeles Mayor Eric Garcetti agreed last week to reallocate $250 million from his original proposed budget to "[reinvest] in black communities and communities of color," with $100-150 million of that sum coming from the LAPD's $1.8 billion budget. New York Mayor Bill De Blasio has vowed to slash the NYPD's $6 billion budget, potentially by over a billion dollars (city comptroller has pushed for a $1.1 billion cut, and multiple city council members said they wouldn't sign off on the budget unless cuts are "meaningful").While these cities are figuring out what "defunding" and "dismantling" will look like, these victories show that the demands being painted as outlandish are well within reach.

Indeed, in response to the recent events, this week #8Can'tWait has revised their platform to include abolition and apologized. "We at Campaign Zero acknowledge that, even with the best of intentions, the #8Can'tWait campaign unintentionally detected from the efforts of fellow organizers invested in paradigmatic shifts that are newly possible in this moment," reads a statement on 8cantwait.org. "For this we apologize wholeheartedly and without reservation." (Writer Clarkisha Kent has pointed out online that #8Can'tWait's new materials borrow heavily from #8ToAbolition without credit.)

Everything that's happened so far proves that radical change is possible

Activists who were once cynical about abolition changing course in the same breath as city governments has everything to do with a radical, rapid shift in public opinion. In the course of a week, police abolition has gone from being seen as a leftist fantasy championed by academics and activists, to a mainstream policy proposal. Tens of thousands of people who'd never heard the term before (and who have no idea what ACAB means) are calling their elected officials about city police budgets, and convincing their boomer parents that reform is not the answer. Police abolition is being defended and explained in every major publication. A group of celebrities ranging from Common, Talib Kweli and Jane Fonda, to JoJo, Lizzo and Minka Kelly have signed onto an open letter co-written by Black Lives Matter and Movement 4 Black Lives, calling to defund the police.

What has always been clear to some thinkers and activists has become clear to millions of people. Those people, who were previously shielded by privilege or ignorance, are reconsidering who and what they believe police really protect, as they watch the video of Derek Chauvin with his knee on George Floyd's neck alongside images and stories of the police operating like a military— police cars being driven into protesters, officers pushing an elderly man to the ground and leaving him to bleed, people losing eyes to rubber bullets, a young woman who died after being tear gassed. People are discovering that in cities like New York, more money is spent on policing than health, housing, homelessness, youth and community development combined. When a disruption in their lives is big enough to make people fundamentally reconsider how they think the world works, very little is impossible.

How to work on police abolition in your city

In Minneapolis, New York, and Los Angeles, elected officials have already made moves to begin defunding the police. According to CityLab, at least 14 other U.S. cities have proposed or committed to moving resources away from the police, albeit in more incremental terms than Minneapolis, like decreasing officer counts or cuts. An even bigger number is talking about getting police out of schools. The more pressure directed at elected officials right now, the more lasting the impacts of this moment will be.

You don't need to be a scholar to get involved, but do your homework. Activists have been sketching out a world without police — or the prison-industrial complex — for a long time. The websites of #8ToAbolition and MPD150 (a Minneapolis police abolition group that's been vital to the public opinion shift), are great places to start. Both have lots of original tools and resources, as well as "resources" sections with comprehensive lists of continued readings. Are Prisons Obsolete? by Dr. Angela Davis and The End of Policing by Alex Vitale are both foundational.

Once you've wrapped your head around abolition, find out if there are already people or groups working on it in your city: either as a part of an abolition group, or another organization working on budget reform (like People's Budget LA) or criminal justice issues. Dig around local news and social media. Journalism non-profit The Marshall Project aggregates news about police abolition efforts. In North Carolina, Durham Beyond Policing, a grassroots coalition pushing for police divestment, has been around since 2016. They successfully advocated last year against an officer increase and for the creation of a Safety and Wellness Task force. They're preparing to fight against a 5% budget police increase. Critical Resistance is an abolitionist group with chapters in Los Angeles, New York, Portland and Oakland. The Anti-Police Terror Project works on defunding, among other issues in the Bay Area. Efforts can also be more dispersed: at a city council meeting in Denver, this week, a group of 50 community members backed by two council members, took the floor to call for defunding the Denver Police Department.

If there's no existing campaign or resources in your city, you may have to start from the ground up. Start researching your city's 2020 budget and asking questions. What percentage of your city's budget does the police account for? Is it an increase from last year? How does that number compare to cities of similar size? How does the number compare to spending on education, affordable housing and mental health services? Are there any disconcerting earmarks on the police's budget? Some places like Chicago, police budgets specifically have cash set aside for police misconduct settlements. What's the cop-to-population ratio in your city? What is the police's relationship to your public school system?

Once you have some of the answers, identify ways you can voice your opinion, like calling and emailing your local budget office. Figure out who has to sign off on the budget for it to pass (usually the mayor and city council members), and call them too. Figure out the next budget hearing or committee meeting where there's an opportunity for public testimony. Social media has been instrumental to recent victories. Turn compelling information about your local police department, paired with action steps, into an Instagram graphic. You may be surprised how quickly it spreads.