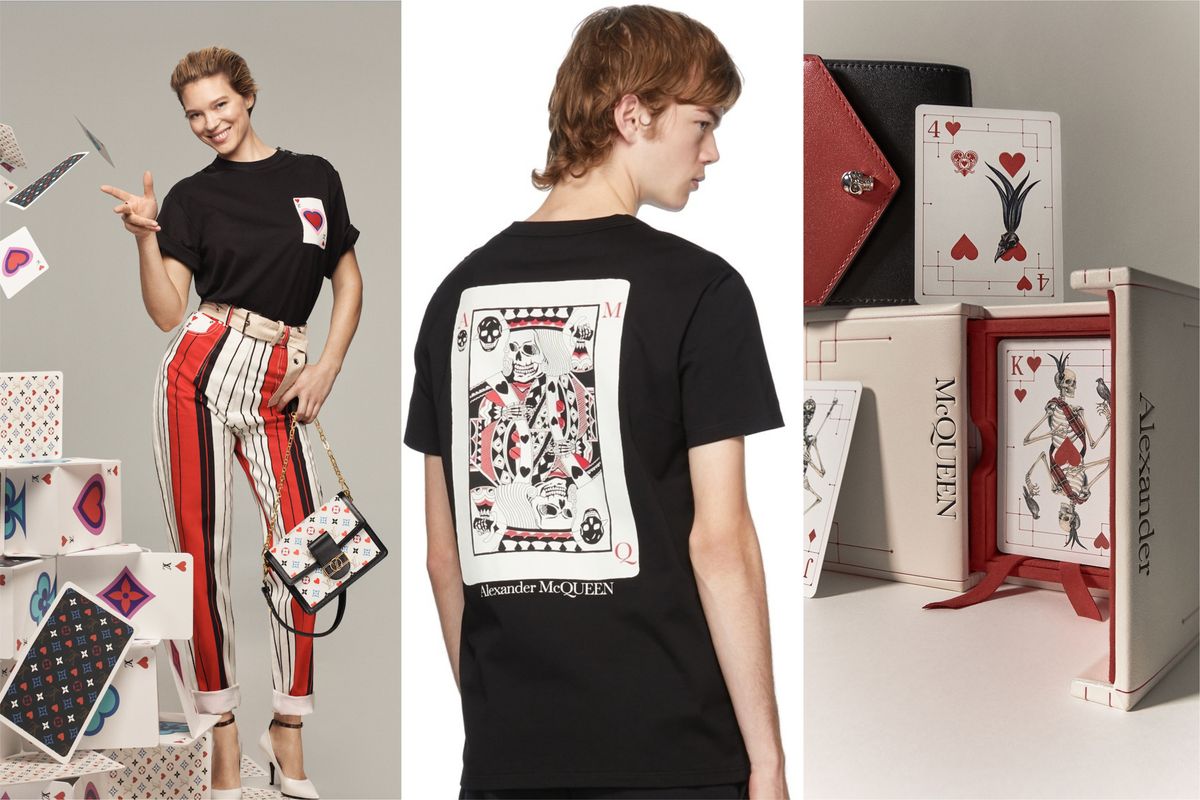 Why Are Designers Obsessed With Playing Cards?

Every now and then a bizarre trend emerges that warrants a closer investigation. Last year it was the proliferation of lettuce at Fashion Week, followed by monkeys and monkey-adjacent creatures on the runways.

This season, it would seem that the humble deck of cards is fashion's latest object du jour. Whether part of their gifting assortment like Alexander McQueen and Saint Laurent Rive Droite or the inspiration behind an entire ready-to-wear collection à la Louis Vuitton, playing cards are suddenly an activity designers are getting behind. So how did we get here?

For his Cruise 2021 collection, Louis Vuitton Artistic Director Nicolas Ghesquière claimed that tarots were his favorite card game, explaining to Vogue that it's "because it can be used in many different ways" and that "cards are full of symbols." The heart, club, diamond and spades were a recurring theme throughout, seen on everything from handbags to blown up card motifs on clothes.

The accompanying campaign featuring Léa Seydoux goes even further by depicting a life-size stack of cards in the background while showcasing the brand's monogram interspersed with the four suits of a card deck. (LV fittingly named this collection "Game On.")

"The collection expresses a particular art of living that keeps Louis Vuitton's trunk-making heritage alive," the brand said in a statement. "It's the symbolism of a deck of cards, the traveler's loyal companion, and endless entertainment that cultivates togetherness."

Related | Why Are Monkeys Suddenly Trending?

Aha! "Togetherness." A concept that many will agree has taken on a new meaning this year, a time when not everyone can physically be together. As someone who has played more card games in the past few months than in past years combined, I can attest to this sentiment. (Being limited in entertainment options can do that to you.)

No sentiment of "togetherness" is more prevalent than during the holidays, which by its very nature is all about spending time with family. Which probably explains why Alexander McQueen introduced AMQ playing cards as part of its new gifting assortment for the first time. Ditto for Saint Laurent, which sells a $485 deck of cards + game box from its more novelty-driven Rive Droite line.

To be sure, this is not an entirely new concept. Playing cards have been a source of inspiration for many designers in the past, from Dolce & Gabbana's Spring 2018 "Queen of Hearts" collection to Vivienne Westwood's pack of cards tied to her ongoing climate revolution series. But the timing of their resurgence as the world rethinks ideas of entertainment, togetherness and travel make it an intriguing fashion reference as we head into a new year.