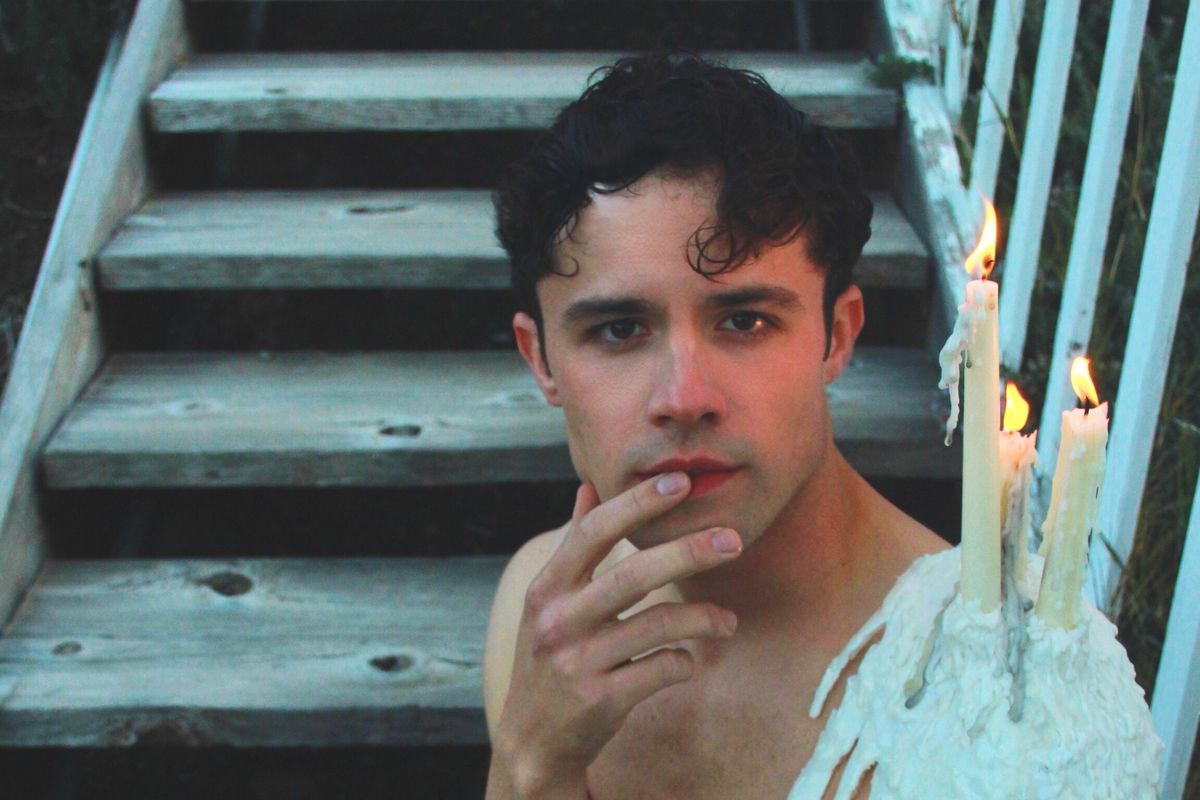 We've all been in stages of transition, one of the most common in the age of skyrocketing debt being that of the post-undergrad existential crisis. "I studied this thing, paid a bajillion dollars a year to learn all I could, and now I don't know what's next." That is essentially Pennsylvania native Mathew Bazulka's story, who, after earning an acting degree at the prestigious California Institute of the Arts, had a huge change of heart. He decided to dive headfirst into a solo music career, which initially saw him exploring heartbreak and the trials of growing up queer. Dissatisfied with the ways those early songs turned out, Bazulka experienced a twist of fate that brings us to where we are today.

Introducing Perta, an unsigned Los Angeles band formed only a couple years ago when Bazulka, acting as lead singer and lyricist, met fellow CalArts students Daniel Zuker, the band's bassist, and Colin Kenrick, keyboardist. The move to LA from Boston of drummer Justin Siegal and guitarist Chance Taylor rounded out the quintet, and soon, the quickly inseparable bandmates were camping in the woods and hammering out demos in Kenrick's childhood bedroom. The resulting sound was formed from the band members' innate theatrical leanings, musical proficiency and influences, which range from Guns N' Roses to funk-pop legends like Prince. Throw in a touch of sexy glam-rock meets power ballad vocals and you've got enough drama to make David Bowie and Freddie Mercury proud. Something about those sessions brought out an authenticity in Bazulka that hadn't existed with his previous solo effort.

"It basically became the five of us crammed into Colin's room and singing and playing our hearts out," Bazulka recalls, and from that, eventually, like the proverbial phoenix from the ashes, Perta's "From Fire" was born. From first listen, the song is just a sign of what's to come. Bazulka says that Perta has since recorded over an album's worth of material.

PAPER caught up with Bazulka to talk about creating "From Fire," living in LA and growing up queer.

You're LA-based. What do you love about being there?

The nice thing about it is that it is an exciting city that you can escape into pretty easily. We actually took our first band trip to Big Bear for a whole weekend and did our first bits of songwriting as a group. We wrote a song called "Stupid Petty Shit," threw it up on YouTube, and it was crazy how much material we had solidified. Big Bear reminds me of my childhood, it was woodsy. I think being in the woods really solidified our connection, too. Honestly, I met these guys, and everything changed. It sounds so cliche, but it all really fell into place.

I grew up in Lehigh Valley in Pennsylvania, which I can best describe as a collection of small towns, farm lands, and a sort of fake city vibe. To me, Los Angeles is actually similar in that way; there's trashy tourism, there's Hollywood, and also you can go to a mountain to get away from it all.

Perta is an interesting name for a band. I looked up the word itself and what came up was that it is literally a "genus of moths."

I should first say that it's definitely Perta, not Petra, which is a Christian rock band, no shade to them [Laughs]. The name comes from one of my favorite plays called Birdy, adapted by Naomi Wallace. In the play, Perta is a bird that the main character befriends. There's one line in it that always stuck out to me: she tells him to "forget this nonsense about 'being a boy.'"

What does that mean to you?

I've always blurred the lines between masculine and feminine. It's something I grappled with growing up— just learning how to be proud of myself and liking myself for who I was. Once I started working with these boys, I had to start being honest in my lyrics and with myself about moments between lust and love with guys I was dating and about cultivating my youth. This play reminds me of being that boy and giving myself that advice of choosing to exist in happiness.

"We can keep it honest, full of story, full of soul, and just a touch of some serious drama."

When you started writing with your bandmates a couple years ago, what was coming out?

Originally some of the work we were writing was very folky — and I love a good storyline. I'm from an acting background. Our manager loves funk music, so that comes through, and also my dad's taste in music leaks into my vocal choices, like Guns N' Roses and stuff like that. It took us the past 2.5 years to find our sound — we figured "From Fire" would be a great way to set the tone for what we are capable of and where we are heading. We use live instrumentation, and eventually discovered that the rock and funk hybrid fits us best, because we can keep it honest, full of story, full of soul, and just a touch of some serious drama.

There's also a lot of drama in "From Fire" too.

It's so funny; things I keep returning to are rock ballad vocal choices— the drama of it all. I think what I love most about that style of singing — without judging it — is it seems naturally very instinctual and animalistic. I love the sound of crying on key. I mean, everybody loves a Celine Dion moment, so I say, ramp up the drama, bring on the showstoppers. I mean the song has this duality to it, anyway...

Related | Troye Sivan On Being Unapologetic About Who You Are

Tell me more about that.

Well, putting your private life on a pedestal in your music can be nerve-wracking. "From Fire," and everything else we've been writing, is honestly just me trying to figure out the differences between lust and love. I know I'm not alone there.

Facts. What do you think is the biggest difference from where you've started to where you are now, as a writer and musician?

For so long, I was sure that I knew what I wanted to do and say. But I think I feel more honest with this band, instead of trying to be something that maybe I wasn't. Also with live instruments, it's all organic and calls for you to be real. This past year or so, I've hit some real mortal moments that have made me realize that life is short; heartbreak is real and it can be devastating to a point where it's out of control. You don't think you're that kind of person until you're that kind of person. I had two romantic entanglements that I was drawing on that were very similar, and in both, I felt like I wasn't enough. Truthfully, nobody ever said I wasn't enough. It was completely inside of me, which I think is a glimpse into what it means to grow up queer. I wrote "From Fire" almost from fantasy, and not being so kind to myself. It's difficult to create a song about a specific moment, especially moments like those. But I think this captures it. Now I just think I'm where i need to be, and the music is where it needs to be — and I feel pretty proud of that.