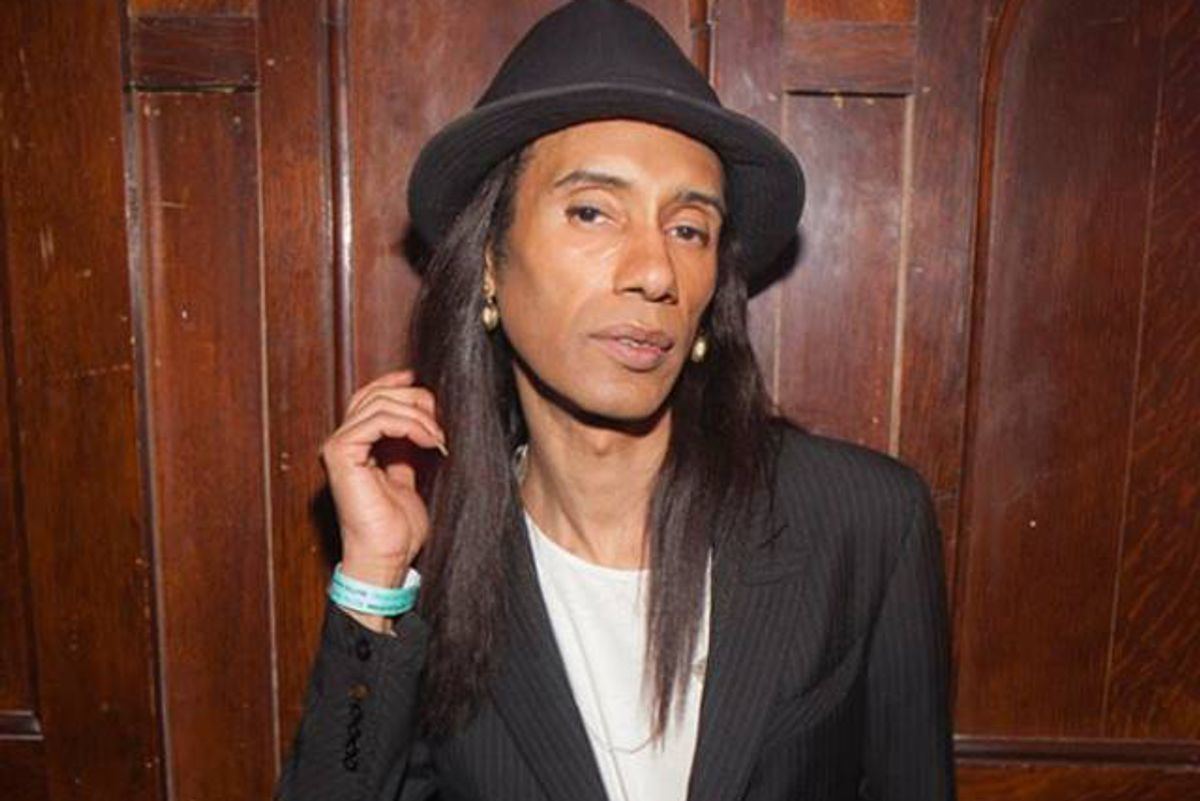 As MC at the long running Jackie 60 party, Paul Alexander gave a running commentary to our subconscious, trilling our thoughts out loud in a way that was seductive and subtle. He's also been part of the high tech dance-music trio The Ones, who found themselves the dressed-up sensation of the European market. And Paul now dons another hat, as the author of Trinkets, a new play with music about romance and responsibility in the '90s trans hooker crowd in the Meatpacking District. He spoke to me about his evolution from Marc Jacobs' perennial bridesmaid to a burgeoning playwright.

Hello, Paul. Where are you from?

I was born in Jamaica, West Indies, but migrated to the U.S.—the Bronx--when I was seven.

What were your aspirations growing up?

I was going to be a fashion designer.

How did you get into the careers you wound up with?

By default. I went to school with Mr. Marc Jacobs, a big influence on my life. We went to the High School of Art and Design, where he was the shining star among the students, the teachers--everybody loved Marc Jacobs. I was always sort of the second place, in my opinion. We went to college at Parsons. He entered a three-year program, I entered a four-year one, so we were not in the same class, but we were still best friends. By time he was a senior and I was a junior, he won the Gold Thimble, the senior best prize, and I won the Silver Thimble, the junior year best prize. I anticipated my senior year getting the Gold Thimble. I didn't. I was very discouraged for fashion designing. That same year, Marc launched his first collection. It happened very fast for him, not for me. I didn't get any big placed jobs like he did, with Perry Ellis. I made my first collection in 1985 for Pat Field. I did spandex shorts, a tutu with tulle on it, a tulle hat—six pieces you could put together however you wanted. I hand stitched everything and my tulle would come off the spandex or the spandex seam would rip. So I'd get returns and did my own repairs, so I got discouraged, thinking, "I can't do fashion." At this time, Madonna blew up and was on every magazine cover. I thought, "Would you want to do this fashion thing or be Madonna?" I decided I was gonna be a singer/pop star like Madonna. There was Terence Trent D'Arby, Boy George, George Michael--people in my age group blowing up. I was also friends with Daphne Rubin-Vega, who was in the Cover Girls. By time they were big, I knew a big star. I was deep in the music world because my roommate, Claudia Cusetta, worked at Profile Records. I'd go to all the clubs with her, hang out in the booths and meet the DJs, and shake all the hands of the people running clubs, while she did her "Here's my new record" bit. I styled some of the artists she was promoting, for photo shoots. I was marrying fashion and music, and it took me until 1991, when Jackie 60 happened, that I got to do my first record.

At Jackie, you MC'd in a very deep-voiced, deadpan style.

I used to listen to the radio—I loved the voices of the DJs like Frankie Crocker. I loved the singers Barry White, Isaac Hayes and Lou Rawls, with their deep voices. When they were taking attendance in high school, one guy said, [deep voice] "Here." The woman literally got an orgasm. She was a different woman after she heard that voice. That was the voice I aspired to. I took that voice.

You never do that fake "Let me hear some noise" routine.

I'm not that much of a hype man. It depends on the gig. Some places, if you're introducing an act, you sort of have to hype. But it's not my style. I feel more beat poet than hype man.

So how did the Jackie gig lead to music?

I'd been doing demos and writing songs and nothing had materialized. I didn't know how to go about it till Johnny Dynell said, "I want you to record." Then David Morales said, "I want you to do what you do in the club." Serge Becker said, "I've got a friend doing a record. I want you to do what you do at Jackie 60 on the record." It happened year after year and was going well. Other people started sampling me. By the 2000s, I did The Ones with my best friends, Nashom Wooden and JoJo Americo. It started out rocky. We did the song "Flawless." It was supposed to be on the soundtrack for the movie. But there was no soundtrack, till two years later it got remixed and became the song of the summer throughout Europe. Right after 9/11, we flew to London to be on Top of the Pops. We did television shows and gay magazines and had screaming fans. In Italy, we had to go from place to place and were treated like rock stars and had a great run basically off the one song. Eventually, we decided it was more of a hobby than a real music career. We were spending money on videos and costumes and making records, but it didn't have its monetary reward. People were saying, "That's great," but we were not making the money of "Flawless." After 10 years, it became clear, "There's no other 'Flawless'." But it's not like we broke up. We're still great friends and talk all the time. We just aren't recording.

And then what happened?

In 2010, I said, "What am I gonna do now?" I didn't want to work at Gristedes or Trader Joe's as a stock boy. What am I gonna do at my age? I used to do display. Can't anymore. I used to do styling. I can't, I got jaded. I tried to reinvent my wheel and I decided I was going to write a musical play based on events I witnessed in my life in a fantastical way that's based on reality. It's called Trinkets. It's set somewhere in the '90s in the Meatpacking District. It centers around a group of transvestite, transsexual streetwalking hookers. There are two storylines going—one is a bit of a Pretty Woman romance, the other is a "come together to do the right thing" story.

Is there any violence in it?

No violence. There's mention of sex, of course, because they're sex workers, and there's reference to drugs, but no actual…It's sort of PG, not explicit in any way. It reflects on the hardships of transsexual women at that point in time, and I guess it's still current. It shows a bit of the hardship that they go through. I based it on real people, although no one character is any specific person I know.

Who are some of the people you used for inspiration for your characters?

One was Portia LaBeija. She was the first transsexual I saw when I was at Art and Design. She was late 20s, with an elderly, well-to-do looking white man. She was head to toe in Alaia, and it was explosive. She was the most gorgeous black woman I'd ever seen. It was explained to me what kind of woman that was. I couldn't believe it. I said, "She's perfect in every way."

Is this your first play?

Yes. All of it is challenging, but it's all in my wheelhouse. I'm about to now start directing the actors. I've written this play and the words to the songs. I had to have different people write the music, like Laurent Gaillat, Eli Escobar, Rami Ramirez, and Kevin Aviance, who is in my play--he plays me. It plays the Gene Frankel Theatre, August 3rd through August 12. I have to mention Gail Thacker, who's co-producing it. We are doing this on a shoestring. I hope people can come because the actors all love it, and if the actors are loving it, it's got to be good. Honey Davenport is the star.

Trans is very trendy in the media these days, but do you feel we've really come a long way on the topic?

Definitely. This play is written because prostitution was the only job these girls could do. I refer to Patricia Field's store because she used to hire trans women all the time, and that's the only place I saw them working, unless they worked as a bartender. There were very few jobs open to trans women, and things have changed a lot. This is reminding people of part of the struggle—what women went through when they had no other options.

I thought about it, of course, from the Boy Bar era. Once [glamorous performer] International Chrysis came into the bar, she inspired a lot of the girls to become girls. After the performance of hers that I saw, there were breasts popping up left and right. I contemplated it, because I used to do drag, but I like being a man and having the androgyny, male/female thing that I do. I think that's more in my wheelhouse. I'm a top, Michael, I'm a top.