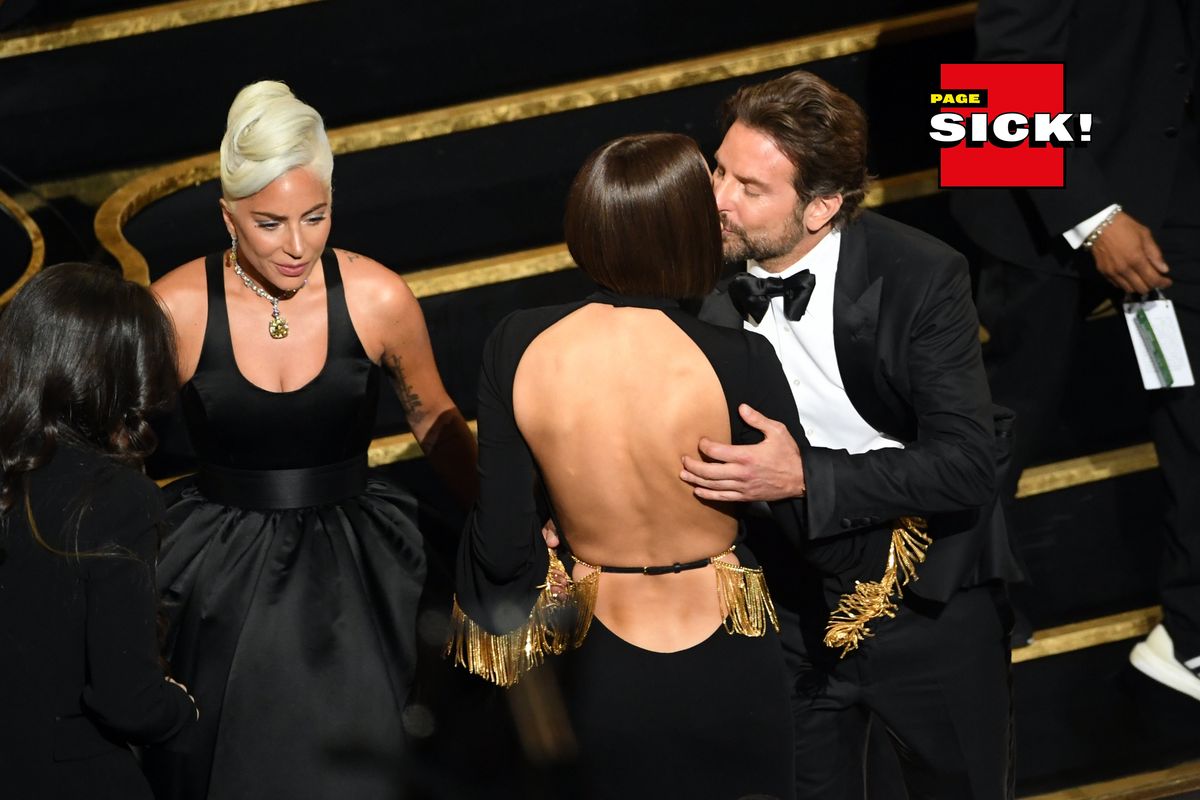 Page Sick: Why Did Bradley and Irina Break Up?

Irina Shayk and Jackson Maine have officially called it quits, after four years and one child together. If you read the tabloids, this has been a long time coming — but rumors started swirling more intensely over the past week. Now the couple has confirmed their split; Shayk was photographed heading to the airport with her Away luggage and everything.

So what went down? Well, suffice to say that many Little Monster A Star Is Born stans will be vindicated by this news. You may recall how intimate Lady Gaga and Bradley Cooper appeared while promoting said movie, effusively complimenting each other on every red carpet and even performing a heartfelt piano duet together at the Oscars. Shayk just had to sit in the crowd and force a smile that night, and many people actually criticized Gaga for making eyes at another woman's partner while she was present. (Gaga had only just announced her split from fiancé Christian Carino, which added to the drama.)

But let's not get carried away. Jackson and Ally made sense, but do Bradley and Gaga? Search your feelings. We're slightly more inclined to believe that Irina and Bradley grew apart and wanted different things. In October, Page Six reported on a dinner date where they "barely spoke" to one another, and included this iconic detail: "He doesn't drink and is into spirituality. She wants to go out."

Irina, congrats! Sounds like you made the right move. Here's what else happened to famous people this week.

Rihanna and Jay-Z Have Impossible Amounts of Money

Rihanna was announced as the world's richest woman musician this week; she is reportedly worth a whopping $600 million, snatching away the coveted title from the likes of Madonna, Celine Dion, and Beyoncé. She made way more money from her fashion and beauty lines than her music, but the next album is on the way, she promises. To celebrate Rih's success, for this week's Stan Story we interviewed one of her most committed fans — he's been updating a fan account for the past decade.

Jay-Z, meanwhile, is an actual billionaire. The superstar rapper and entrepreneur has been building an empire for more than two decades, and has finally joined the same club as... Kylie Jenner. He's the first rapper to achieve this milestone.

There's Hope For Kylie and Jordy

Speaking of Jenner, she's been doing some thinking, and is reportedly ready to reconcile with former BFF Jordyn Woods. The two stopped talking post-Tristan Thompson scandal.

Now, an US Weekly source says, "their relationship is on the road to recovery." The source adds that the separation has actually been healthy, and that Woods is enjoying living in her own place, as opposed to Kylie's literal pool house. Self-actualization! Another source says that "Jordyn has been trying to show the world that she isn't riding on the Jenner-Kardashian coattails any longer... she's doing her own thing and living her life comfortably."

Jenner apparently thinks "the separation from Jordyn will help both of them — and Kylie's family — to heal." But she is open to gradually healing the rift. In Kylie's honor, forgive someone in your life for their drunken mistakes this weekend!

Scott and Sofia Are Headed Down the Aisle

More Kardashian news! The Lord may soon wed his lady. Scott Disick and Sofia Richie, who is 16 years his junior, are apparently talking "seriously about getting engaged," and are telling friends that marriage is "a real possibility." Disick even has the "full support" of ex Kourtney Kardashian. Kourt really is the coolest.

She is coming! For the patriarchy! Miley Cyrus has responded to a terrifying incident in which a man forcibly grabbed and kissed her after her performance at Barcelona's Primavera Sound Festival last weekend, and she's as vocal as you might expect about the violation of personal safety.

I really thought I was finally over Pete Davidson, then he goes and does this. The smile. The confidence! This MAN! I see what Kate Beckinsale saw in him. Davidson, whose regular gig is on SNL, now moonlights as a high fashion model. He walked for Alexander Wang's Collection 1 2020 runway show, and he could do this full time, if he wanted to, just one girl's opinion.

Davidson wore a simple look — not too far from something he would wear on the daily: a white tank top that showed off his collection of tattoos, including one of the Notorious RBG. He also wore a black backwards cap with the Alexander Wang label, along with two-tone pants with one leg in black leather and the other a light-wash jean. Thank you, casting agent.

Bonus round: Joe Jonas almost kissed the wrong girl. Taylor Swift isn't as good at spelling as she thinks. Priyanka comes out and says what everyone else is to afraid too. Tan France speaks out about his childhood and skin bleaching.