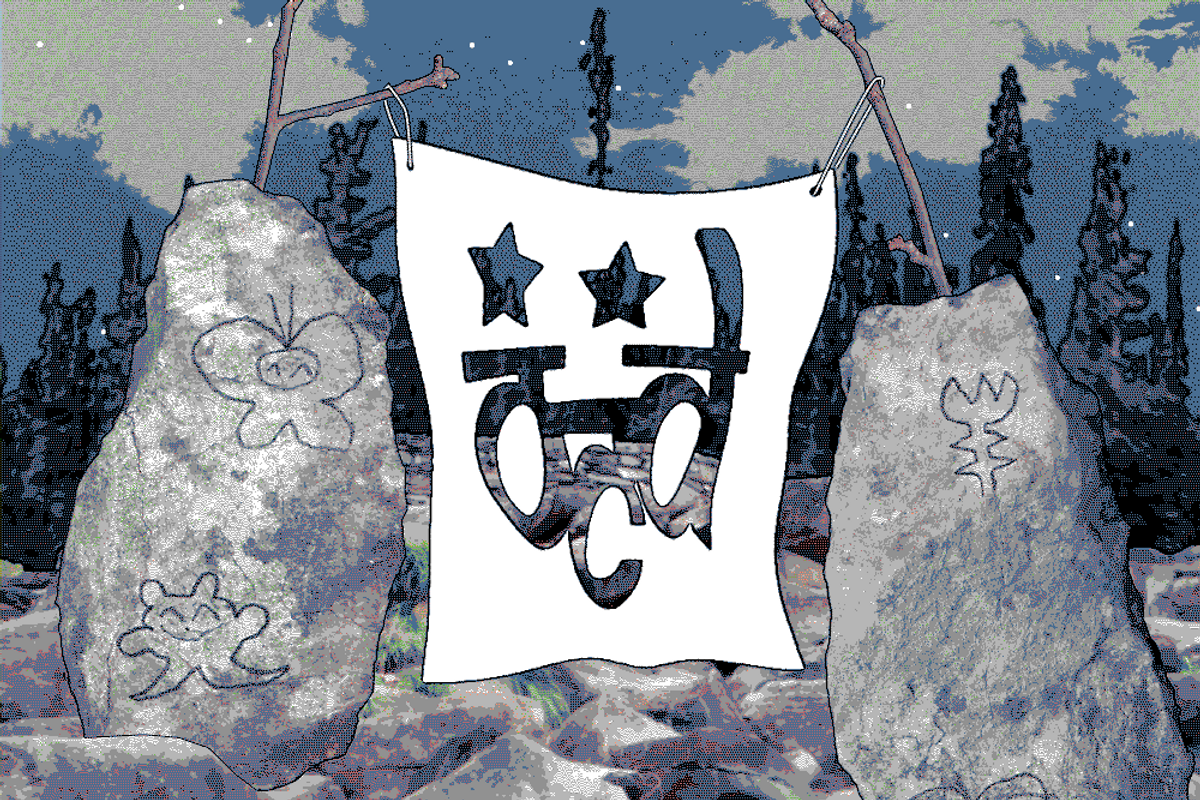 Formed under mysterious circumstances in the shadowy corners of the internet, not much is officially known about OCD. Some say they met "backstage" at a URL show while others insist they are a sleeper cell activated after the conclusion of an obscure reality game buried deep within YouTube's archives. What we do know is that the mysterious cabal of producers is comprised of rising musicians Himera, Murder Club and Cole Longanecker, and they're just about ready to unleash their creation into the world.

Their debut EP as OCD, Alignment, is almost upon us (out May 9th to be exact) and the trio was kind enough to give us a taste of what to expect with their first track off the release, "Confirmed." Full of heavily filtered breaks, booming kicks and ominous synths, "Confirmed" feels like the soundtrack to a rave thrown on the dark web. Sounding like a cross between Special Request and Amnesia Scanner if the two grew up on a diet of Soundcloud and deviantArt, the track straddles the line between being experimental and club viable. It may just be the beginning for OCD, but they already have us excited for more.

Ahead of the PAPER premiere of "Confirmed" and the trio's debut at Club Cringe tonight alongside umru, Dorian Electra, Machine Girl, Kane West, Juliana Huxtable and more, we caught up with the members of OCD to find out what they are all about and get the low down on their new EP, Alignment.

How did you all first meet?

Himera: Oliver was always part of the same circle of Soundcloud producers that I'm friends with, but I never really talked to him until Cole forced us into a groupchat to work on visuals for his first EP.

Murder Club: I first met Cole after stumbling across his Laura Les remix late 2018, and later asking him to play a set at this bi-monthly URL event I used to run (Which also led me to becoming mutuals with Himera.) For about half a year after that we didn't talk much until Cole asked me to make him a few videos for his upcoming release with art direction/design from Himera, he added me to a group chat and we just evolved into a team/group from there and never really stopped talking.

Cole Longanecker: Last summer I commissioned Himera to make artwork for my first EP, and then I commissioned Oliver to make music videos. Oliver made a group chat so we could all talk about it, and we just never stopped talking. I think they both randomly found me on Soundcloud or Twitter.

OCD: "OCD" is an acronym for our names: Oliver (Murder Club), Cole (Cole Longanecker), Dan (Himera). Cole also has OCD, so the name feels oddly fitting and personal in a sense.

​How would you best describe your sound?

Himera: It's really a direct reflection of anything we all find inspiring at any given moment. We send music and art to each other all the time and draw inspiration from any weird shit we see on Instagram or find in the deepest crevices of Soundcloud.

Murder Club: Personally my section of the sound comes from really just emulating anything I am listening to at the time, so when Cole or Himera send a demo to work on and I listen to it on repeat, I will end up making something OCD worthy alongside it.

Related | Umru Is Getting Results

What was the inspiration behind "Confirmed?"

Himera: "Confirmed" came about from listening to the Jet Set Radio Future soundtrack for too long on my end. The drums and vocal chops were sort of a reflection of that, but with that sound-design jarbled chaos to keep it interesting. The EP itself was an amalgamation of all of our inspirations at the time, so lots of baile funk tunes and weird formant-shifted vocoded vocals. The last track is sort of an outlier, it started off as a waltz piece I had written (the first thing I wrote after getting a new laptop) that laid dormant for several months before I sent it to Cole and he made it into this cinematic soundscape.

Murder Club: Really just constantly messing around in the DAW, for example after Himera sent the stems I randomly processed the bass to make that weird formanted Amnesia Scanner-esque vocal section, aside from that I didn't really work on the song all too much besides from chopping a few breaks at the tail end of the song. (The whole "Confirmed, Pronounced, Remaining or Unmarked" theme of the EP came from the finale of an old ARG I used to run, after showing Himera and Cole we decided to call the tracks that.)

Cole Longanecker: When I made the original demo for "Confirmed," I was having a lot of trouble coming up with solo music and my friend sv1 told me to "make something I would never make usually." So I just started putting sound design over these breakbeats. I sent it to Himera and Oliver and they pretty much just destroyed the song in the best way. "Pronounced" was pretty much the same way, we took an old demo and completely reworked it. "Remaining Or Unmarked" started out as this waltz piece Himera made. We have been really into 3:4 music recently. I added this second half, and some sound design. I'm a huge fan of RPG soundtracks and classical music, and I wanted to make the most dramatic thing possible. For OCD in general, this project gives us a chance to make something completely removed from our own solo work and just have fun making whatever. We are developing a style now but really, for me, OCD is just a chance to have fun and make something with less pressure.

What do you hope people get out of the new work?

Himera: I hope the music remains to some extent accessible and enjoyable, yet takes people out of their comfort zones.

Murder Club: I kind of hope this can evolve into something that is viewed separately from our original individual musical identities into a being of its own. With this project it's quite hard to pinpoint where each of us have individually worked on the songs because none of us (besides Cole) have made really anything like this or really used any of our conventional production methods while working on this, so I'm optimistic about the way people will perceive and dissect this new body of work.

Cole Longanecker: I hope people have as much fun listening to it as we did making it. I hope OCD becomes a new entity, separated from our solo projects. OCD is a wild amalgamation of our influences and styles, and I hope people enjoy the chaos.

What have you all been up to in quarantine?

Himera: Making lots of music, coming up with new melodies, getting back into using drums, using sounds I never usually use.

Murder Club: Not being able to make music at all, being extremely overworked playing 3-4 URL shows a week, ignoring all of my friends, being stressed out, having manic episodes, staying up until 5 am every night, and finalizing this EP.

Cole Longanecker: Aside from losing whatever small amount of sanity I had left — I have been working on new stories and sounds, starting my new imprint "Curiosity Shop," learning how to draw, and playing a lot of Animal Crossing and FF7.

What's on the horizon for OCD?

Himera: A makeup line, a Netflix original spinoff and a peace offering.

Cole Longanecker: We make music and art every day, so there will inevitably be more OCD stuff. We have a couple sewing projects in the works. Oliver is also learning how to use one of those fushigi things, so maybe we can do something with that.