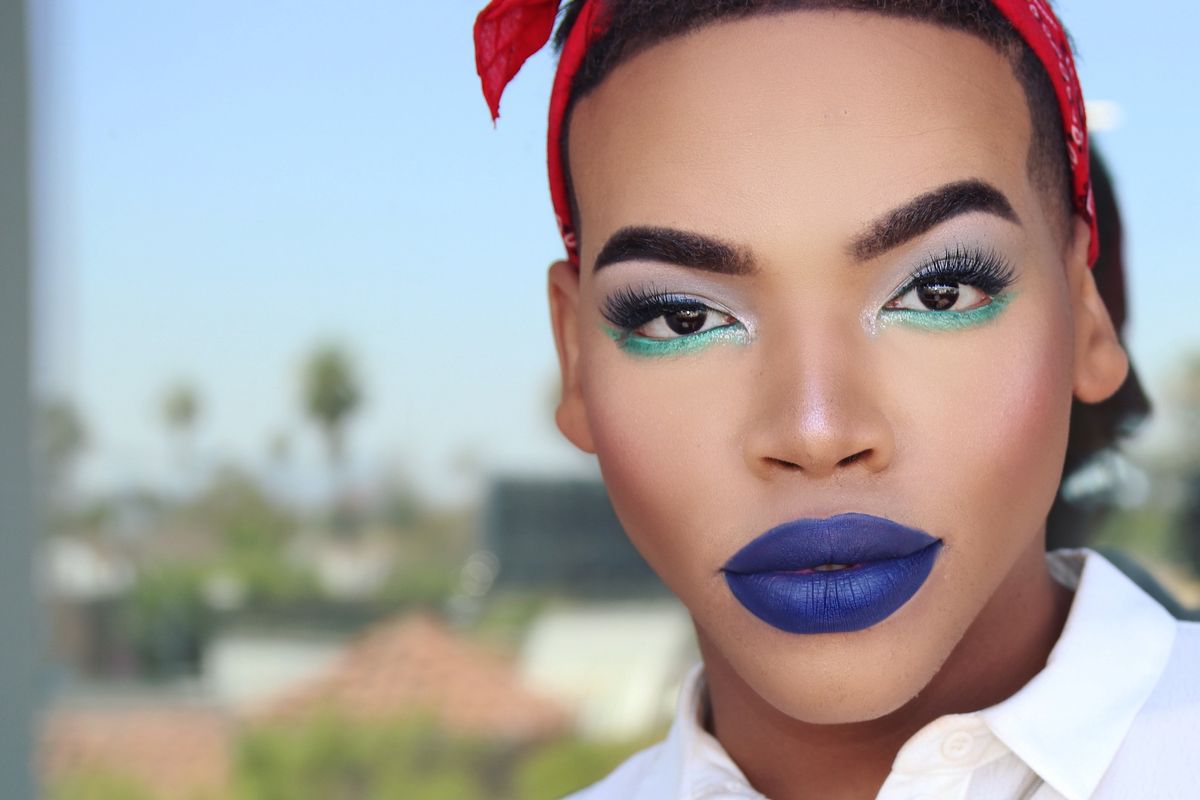 The next time you need a break from depressing headlines or clickbait-y listicles, head over to YouTube to get beauty tips and unfiltered advice from HeFlawless -- AKA Kenneth Senegal. The vlogger, originally from Houston, Texas, has racked up over 300,000 subscribers to his channel where, along with the aforementioned makeup and life advice, he spills the tea on all of his misadventures -- especially of the romantic variety. The openly gay YouTube star has one particularly memorable video entitled “He got caught in my house!!" which features Senegal recalling an episode from his senior year in high school when he snuck a date he met on Jack'd inside his mother's home and ... things didn't go as planned. (We won't give everything away but it's worth watching HERE.) But amidst all of these gossip sessions and beauty advice, Senegal often shares a more vulnerable side, opening up about everything from depression to sexual assault. We had the chance to chat with Senegal to hear more about how he got his start, his interest in the beauty industry and the most difficult story he's ever shared online.

I had seen no one that looked like me so I wanted to be the representation that I didn't see growing up -- sort of a voice for the people like me that are afraid to speak. I also wanted another outlet to express myself. I've always been a mildly social person and people always have gravitated towards me. I've also always been a creative. Once I started to do makeup in real life, people kept asking me to do makeup tutorials. So I thought "makeup tutorials & my personality" -- seems about right for YouTube.

When did you first become interested in makeup, skincare and the beauty industry?

I first became interested in everything beauty at a very young age. My mother was a showgirl who was often gone performing. I always watched her while she got ready. I also took inspiration from Beyoncé and her simple approach to beauty. And, to balance it all out, I found even more interest in makeup one night when I was sneaking to watch RuPaul's Drag Race. I admired the queens on the show and their skills with makeup artistry so somewhere in between my mother getting ready for her shows, admiring Beyoncé, sneaking to watch RuPaul's Drag Race... I started to play with makeup and the passion grew from there.

What have you learned the most from your experience as a YouTuber?

It's made me more understanding than I already was. I've learned that a lot of people only think about things from one perspective. They've been taught everything they know, and if it's anything outside of what they know people fear it. We often assume that people think like we do when that is not the case. You have to teach people what you know while also having the open mind to learn.

In your “I Want To Be A Woman?" video you respond to specific comments you've received from viewers who have negative reactions towards you wearing makeup. How do you deal with these people who try to put you in a box and label you in regards to your gender?

When I speak on more serious topics, I usually speak because I know that a lot of people don't know any better and you have to teach people because they fear what they don't know. People usually have problems with me wearing makeup and doing things that "girls do" because they've been taught that men shouldn't do these things. If I ever speak aggressively it's because I'm passionate and know these hateful comments can hurt others like me that may not be as strong as me.

What do you think of the inroads guys are making in the beauty space, especially with the first male 'Covergirl'?

I feel like in the beauty space I'm proud that we live in a time where a boy in makeup can be seen in ads. While I do wish there was a bit more diversity, I'm still proud!

What advice would you have for someone dealing with the same issues in regards to gender identity and being told to conform to one?

The only advice I have is for them to be themselves. As cliche as it sounds, being yourself is key! Just know while being yourself that everyone may not understand it and that's okay. You don't have to conform to what you've been taught or to what people think you should be. At the end of the day we have been taught everything we know and everything you have been taught is not always right. The more you see and experience you'll realize that you don't know much at all. Being yourself is being what you feel, as long as you're happy and not harming anyone, it's perfectly okay!

One of your most powerful videos was the one in which you discussed surviving sexual assault as a child. Was this something you had planned on talking about for a while or more of a spur of the moment video?

Sharing my molestation story with my subscribers was definitely not as difficult as it may have seemed. Usually when I speak publicly about situations it's because I've come to peace with them or I'm coming to peace with them. In that video I was emotional but in all honesty it was more of a feeling of relief. I definitely was going through different emotions because while I was telling my story, some memories were very vivid. However, I've learned to not harbor pain forever even if stuff still affects you and if my story can help anyone, then I don't mind sharing it. It's also therapeutic to speak out too, so I guess it helped me just as much as I helped all the people that emailed me afterwards.

In another one of your videos you opened up about depression and feeling alone.

When I opened up about feeling alone in that video, I honestly took away that I'm not completely alone because there are so many other people that feel the same. There are so many people that experience the same things that I experienced dealing with depression and all -- it's just the fact that people often don't speak about it. It's something that's often swept under the rug. When we speak about it though, that is when the healing process begins. We feel like we're alone a lot of the times because we feel like we're the only ones dealing with these things when we're not.

On your channel you talk very openly about your family and we get the chance to see videos of you doing challenges with your niece and story times with your sister. How is your relationship with the rest of your family members and do they watch your channel?

The thing about my family is that it's far from the normal family. No one in my family is super close to each other. Other family members have seen a few of my videos and have reached out to tell me that they enjoy what I'm doing but that's about it.

Do you ever worry about sharing too much on your channel?

I don't ever worry about sharing too much on my channel because I always share just enough. Throughout different stories I often dumb them down or cut out some details. I always tell my fans/supporters/subscribers that I only share about 40% of my life with them, the rest I have to keep private for my sanity. The thing is that I've experienced a lot more than a lot of people have and while it may seem like I'm sharing too much... the truth is that I've only scratched the surface. It may be a deep scratch but we're still not past the surface.

How did the cultivation of your alter ego, Kadeva Balenciaga begin?

My alter ego Kadeva Balenciaga is just simply a more fearless me. I actually have another alter ego that goes by the name of Paige. Kadeva Is the more edgy, fearless side of me while Paige is more reserved. I actually came up with Kadeva a few Halloweens ago though when I was younger. I used to sketch this character out that wore my "Fashion Designs" and as I got older I just made my sketches come to life. Paige came later.

Which story that you've told on your channel was the most difficult for you to talk about?

The most difficult story to tell on my channel was definitely my molestation story. It sent me through the most emotions.

Which story do you look back on and still laugh about?

The story that I look back on and still laugh about the most would have to be my experience with a girl. It's funny because I still talk to the girl every now and then. Me and her were both trying so hard to fit into society's mold when we both were not cut out for it.

Now for some beauty picks - what's your favorite foundation?

My favorite skin care products would definitely have to be my Fresh Soy Face Cleanser and my Charlotte Tilbury Magic Cream.