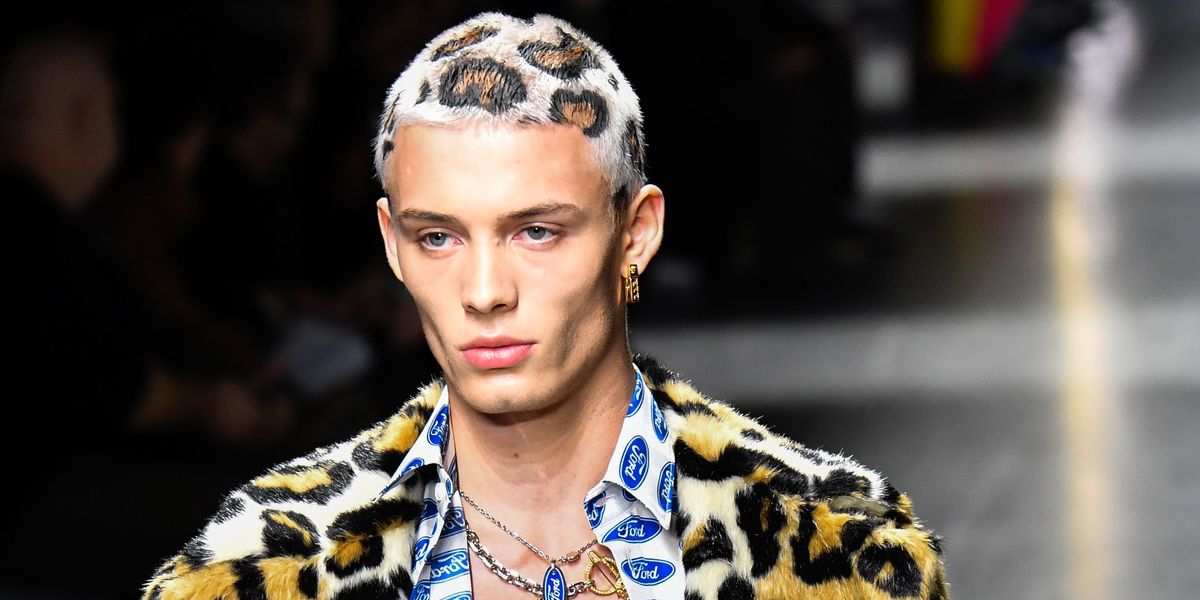 The big news on the Versace Men's fall 2019 runway wasn't just the sexy rock star separates. Heads turned specifically over the leopard print dye-job on model João Knorr, which hair legend Guido Palau had spray-painted into Knorr's buzzed hair to match the leopard-print jacket he wore on the runway.

While it's fresh for this season, the big cat-inspired coiffure has a long, rich history throughout pop culture, beginning in the mid-nineties.

Dennis Rodman, the attention-loving basketball player-turned-North Korean envoy, was an early adopter of the feline style in 1998, rocking it both on the court and for talk show appearances. His buzz was dyed and designed by JoJo Baby, one of Chicago's original club kids and an all-around drag legend.

No Doubt drummer Adrian Young worked the look in an Orange County ska style for the band's Hype Williams-directed video for "Ex-Girlfriend" in 2000.

The Grammy Awards red carpet has been a popular destination for sporting the catty look, with sex bomb rapper Nicki Minaj working it in 2011.

And Tyler, the Creator pairing it with Louis Vuitton in 2018.

Even Nick Cannon showcased a leopard print 'do for Good Morning America in 2014.

Stylist Katy England seems to be the most old-school OG when it comes to leopard hair. Just after the Versace show, she posted a shot on Instagram from a 1995 editorial she did of model Keith Martin with photographer Zanna and hair stylist Yiotis Panayiotou for the Evening Standard Magazine.

California-based Janine Ker is among the present-day artists keeping creative buzz cuts relevant, including a full series of animal print dye jobs that can be seen on her Instagram.

"For the leopard print hair, I really took my time to study and research leopard fur," Ker says. "I noticed there were variations in background tone and their 'spots' are not just simple spots, they are irregular shapes called 'rosettes.'"

2. Decolorize the hair (I used Schwarzkopf BLONDME with 20 volume, on the scalp ratio).

3. Process and rinse with cool water, and dry hair (you will want a light yellow background, aka level 9).

4. Paint the smaller brown spots on using a mixture of Manic Panic "Psychedelic Sunset" (orange) and a spot of "Atomic Turquoise" (you can increase the blue ratio as needed).

6. Process the color for 25 minutes, rinse with cool water.