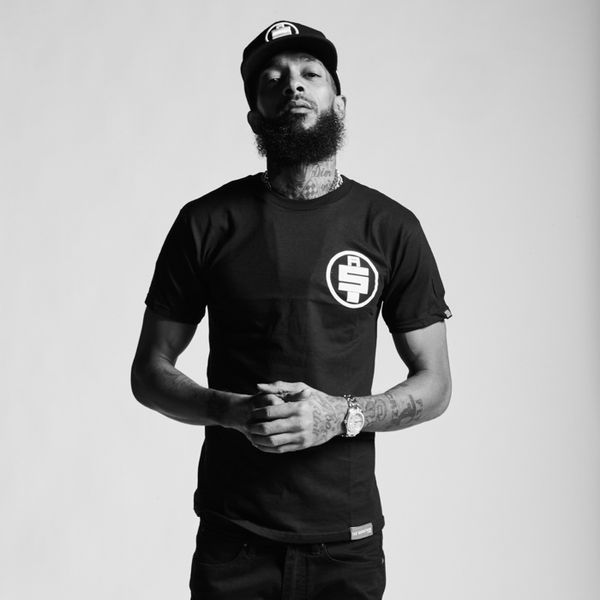 Nipsey Hussle on Kendrick, L.A. Rap, and Why Patience Pays Off

You'd be forgiven for not knowing that up until mid-February, Los Angeles rapper Nipsey Hussle (born Ermias Asghedom) had never released a full length studio album. The 32-year-old rapper has released a prolific string of mixtapes over the last 13 years including three installments of his Bullets Ain't Got No Name series, The Marathon, The Marathon Continues, and Crenshaw, appeared in two films and an episode of Crazy Ex-Girlfriend, and claims dozens of credits on tracks with other luminaries of rap like Drake, Snoop Dogg and T.I.

Still, it wasn't until 2018 that Nipsey finally released his studio debut, Victory Lap, in partnership with Atlantic and his own label, All Money In No Money Out. The album, which features appearances by fellow LA-native Kendrick Lamar, P. Diddy and YG, debuted at number 4 on the Billboard 200 and received critical and fan acclaim. Tapping into his roots and elevating the West Coast tradition of eerie synths, heavy bass and introspective lyrics punctuated by celebratory proclamations, the album shows that patience really is a virtue, and that when combined with hard work and dedication, it will pay off.

We caught up with the rapper the week of his album release to talk about rapping about real things, why naming his debut album Victory Lap made sense and what he has in store next:

How does it feel to finally have this album out?

The feedback it's unanimous, everybody loves it — so I feel good about that. I was really confident in it, but when it came out and other people confirmed what we were feeling about it, I felt good.

How many years would you say this album has been in the making?

Honestly, five years. I've been saving records since 2013. I've dropped new beats since then, but my best records since coming off the Crenshaw Tour, I been saving because I really wanted this to be a statement.

And how would you describe this body of work?


I think it's gritty, and it's royal, it's hood but it's also intelligent. Authentic words on top of beautiful music.

I know you worked with Kendrick a little bit on this, what was that experience like, being that you're both from LA?

Kendrick, he's a legend. Me and him, we been knowing each other since we were both opening up for The Game on the LAX Tour with Jay Rock and the rest of TDE. He's at his best right now, so I appreciate him contributing the energy to the album, but he killed it. He's been in the game for a while, been through all the stages, and he spoke to the concept of dedication — talking about his grandma, talking about coming through being in Compton to where he is now. And you know, I just think it was dope.

How do you feel about the state of rap in southern California right now?

Man, I feel it's a renaissance for real. As far as lyricism and production, LA might be the forefront if not definitely one of the markets bringing just quality contribution to hip hop.

Atlanta's got a very collaborative vibe, do you find that in LA?


I do. You'll see a lot of us building whether it's tours, features and all that — we all work together.

This album has been so long in the making, has it been frustrating at all?

I ain't gon' lie, it was frustrating, but I always believed in the plan. It felt like the most important thing to do was to do what we done, and to situate the business and to make sure that we were able to deliver on our own label with a partnership, and also that when we did do it, it was a statement, and it was a step in the direction of classic debuts. I didn't wanna just drop an album to drop an album.

I wanted to drop an album to stand on the legacy of Doggy Style, Chronic, Illmatic, Reasonable Doubt — all the classical debuts. So, I always view myself in that light as one of the artists that's gonna have a long career and at the end of it be legendary. I felt like the debut album was really important.

Why the name Victory Lap?

Well I've had a brand called The Marathon, got a mixtape called Marathon, and when I did deliver my debut album and break out of my region, I wanted to represent that under the title Victory Lap. It was a prophetic title, because I've been talking about it for some years, but the moment in the music corresponds with the title 100%.

You talk about some of the more difficult things you've been through in life on your records. There have been comments from other rappers recently that hip hop doesn't speak to real things — why do you think it's important to address those things?

Everybody has their own take on what's important, and to me these are just the things that are important. My experience is different than everybody else, and everybody speaks from their experiences. Hopefully they're rapping about what they've been through. I had an unique experience, so to be honest the music is going to come out the way it came out. Doesn't necessarily resonate with the what's trending right now, but it's true. It's been a little bit of a departure from the norm, but I think that worked in my favor. I think it's refreshing, I think it's being embraced.


What's next for you?


Right now we're supporting the album — we're doing press, we've got videos to shoot and more videos soon. We've got a documentary piece we're working on — a story about my life. For sure we're going to tour the U.S. and the world. We just been selective with what markets and what venues we want to do. I really want to up the level of my next concert, because this music to me is so next level and I want to represent that on stage in a creative way. So we're just taking our time and being patient.