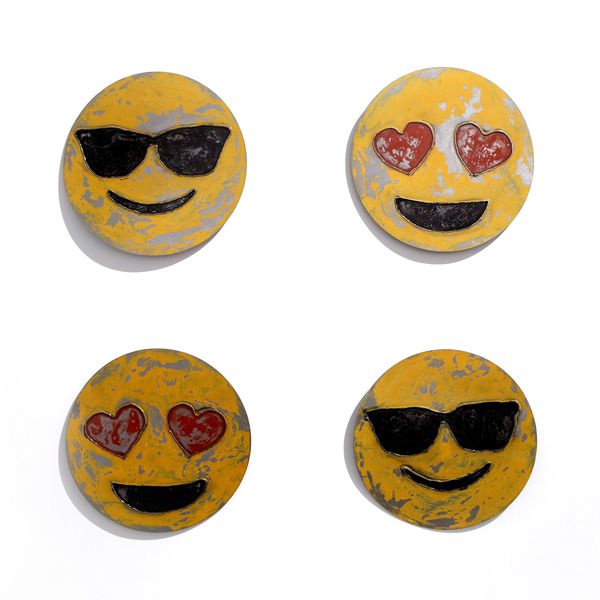 This Artist Is Turning Emojis Into Steel Artifacts

Ten years ago, emojis were introduced to the world, ushering in an entirely new era of communication for the digital age. Written word had already been reduced to typed word — first in emails then in texts — and emojis simplified communication even further, distilling complex thoughts into a keyboard of graphic icons designed to be universal. For Michigan-bred welder Nick Moss, this switch was somewhat disturbing, and inspired him to create a series of steel emojis to capture a moment in time.

Part of his fascination — and criticism — stems from growing up in a much simpler environment than today's fast-paced culture of ever-evolving technology. Moss was raised in small town Metamora, Michigan on an intensive crop farm, surrounded by industrial steel machinery. There, he began learning the ropes of welding, and in 2008, joined Traeger Wood Pellet Grills, where he was given chief control of engineering all steel grills and smokers.

When he sold the company at 28 years old, Moss decided to become a full-time artist, choosing steel as his medium and shifting from grills to large-scale sculptures (or as he calls them, "steel paintings"). He and his girlfriend moved to quiet Carmel, New York (in Moby's old home, nonetheless), where Moss now welds his pieces in a studio surrounded by sprawling forest and scenery that looks like an IRL Thomas Kinkade painting.

Replicating the precise curves and exact shapes of an emoji isn't easy; Moss is an expert in his field, having learned to control the heat and direction of a flame through the small window of a torch mask (welding without one causes eye damage, adding a layer of danger to Moss' craft). The artist compares his welding torch to a paintbrush. When he ignites the flame, his process looks dramatic and uncontrollable, but the result is somehow a perfect line.

Applying various patinas to Moss' sculptures introduces a touch of spontaneity to his practice; some are colored to mimic the original emoji, with silver steel appearing underneath a sheet of golden yellow, while others have a more natural, marbled look that maintains the metal's original quality. Lined up together at at his first solo exhibition in New York City's Leila Heller Gallery, Moss' emojis are all unique — their shapes are consistent, but the coloring is different from sculpture to sculpture.

A decade after the release of emojis in 2008, Moss seems to be spotlighting, and in many ways dramatizing, what he views as the decline of communication. While the emoji may seem everyday, right now — and especially in the context of fine art — Moss' work is something future generations can look back on in the same way we examine Egyptian hieroglyphics. What did the side-eye emoji really mean? And how in hell was the eggplant emoji used?