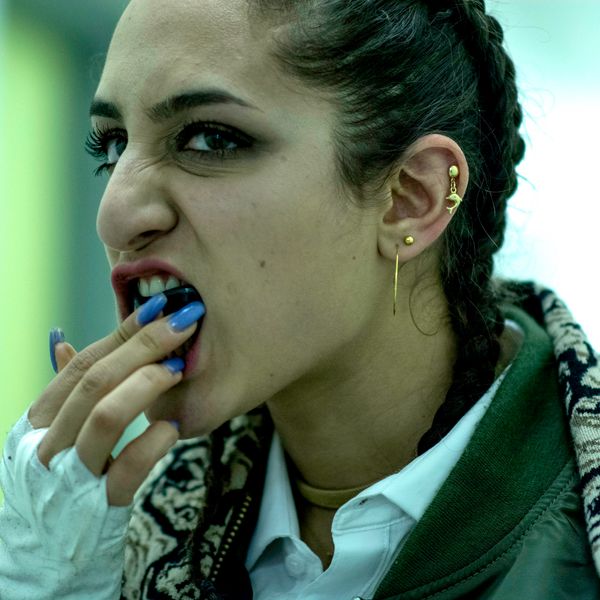 Born in Jönköping, Sweden to immigrant Iranian parents, Nadia Tehran spent a large part of her life feeling like an outsider. Like most rebellious-minded 13-year-olds who feel like they don't belong, Tehran found liberation in performance: playing in punk bands in her small Christian town. After outgrowing the scene, she held onto the anti-authoritarian ethos of breaking barriers, and sometimes, laws. Now, Tehran's music is informed by this sense of rootlessness, her songs blurring the lines of genre and borders. Nadia Tehran's debut album, Dozakh: All Lovers Hell, is out today via Stockholm label YEAR0001.

While studying and working various jobs, Tehran continued to write songs but drifted towards a more electronically oriented, hip-hop sounds. In 2016, she released her acclaimed synth-punk EP, Life is Cheap, Death is Free, which included a single called "Refugee" that Tehran and her father filmed the video for illegally in Iran in violation of Sharia Law. Throughout shooting the visuals, which feature clips of Tehran dancing atop buildings and Iranian guards patrolling the streets, she was stopped by police and arrested. She hasn't returned to Iran since, but is determined to go back one day.

Related | Mona Haydar Is a Force to be Reckoned With

Despite all odds, the Iranian-Swedish singer is unwilling to stand down in the face of oppressive systems. But Dozakh isn't all rebel yells; although Tehran has gained an audience through incisive anthems like "Refugee" and "Jet," she also spends time on the new album exploring soft moments and intimate introspections. She sings of matters of the heart and unrequited love on songs like the foggy "Alcoholic Waves," the confessional "What About Me," and the stripped-down "Tell Nobody."

Dozakh or دوزخ is a word found in Persian poetry that roughly translates to "hell." It's a not a hell in the religious sense, but rather, a metaphorical place of emotional torment where one lands when separated from their lover. Meditating on displacement and intergenerational trauma, the stories explored on Dozakh: All Lovers Hell, exist in these kinds of liminal spaces.

The album opens with her father speaking in Farsi as he recounts a near-death experience from his time in the Iraq-Iran war. As the LP progresses, she explores the inherited impact of war on songs like "Come & Go," "AFA poem" and "Nazi Killer." More snippets of voice recordings from her family are interspersed throughout — her mother reciting a poem like a voice coming to you in a dream on "Sail On," her sister's imbibed new year's voicemail on "In Tune With The Moon."

The LP navigates between eastern and western influences with ease, moving from synth-fused rap to explosive punk textures ("Something New") and mixing in delicate, dreamy melodies ("Oops") along the way. The A-side ends with "High," a pared down piano-based track that soars into a sweeping symphonic breakdown. It segues into the Coucou Chloe-featured banger "Jet," whose lyrics both skewer and reclaim refugee stereotypes. Dozakh: All Lover's Hell crystallizes a decade's worth of musical and personal growth into 15 tracks, each showcasing Tehran's versatile songwriting skills and sharp lyrical prowess.

Dozakh is over 10 years in the making, and in 15 songs, it covers a lot of ground. Whether reflecting on relationships or delivering biting social commentary, Tehran's celestial voice cuts through the noise, highlighting how anyone can find a sense of unity — even when they feel lost in the cracks.

PAPER sat down with Tehran to discuss the creative process behind her new album, the difference between activism and false wokeness, and how she's forged an identity of her own.

You've been working on this album for over 10 years. What was your creative process? How did you get to a point where you decided you were ready to put this out?

Growing up, I found performance very empowering. I started out playing in punk bands and rapping and I created this artist persona that was really tough and hard and political and aggressive. That's an image that I'm very comfortable in because I feel very powerful in it; It's like a super version of me. But then behind closed doors, I was writing these other songs — the soft songs about boys or unrequited love. But then through the years I became friends with that side and I realized that the songs are me. I've been trying to release it for a long time but I've been in legal battles with major labels so it's been a mix of a lot of things but i think the time has helped the songs to become more timeless. This is the secret space I've been turning to behind the scenes and now it's the album.

Where did the inspiration come from in creating your art exhibition "Dozakh: Inherited Void" and what does that word means to you?

I made this record and I was thinking about how I can present it and put it into the context of where it belongs, that's where the idea of the exhibition grew from. It's a Persian word only used in Persian poetry. It's an emotional state that you're in when you're separated from your lover. So the album is called Dozakh: All Lover's Hell and the exhibition is called Dozakh: Inherited Void. It's an extension of the music and I'm thinking of Dozakh as this metaphorical place that I have experienced and there's a lot of stories that live in there. So this space, the dozakh, is kind of the space that I'm trying to create physically with the exhibition.

Have your parents always been supportive of your art and your music?

My father and my mother's stories have been a key for me to understand who I am and where I'm from. The sample of his voice in the beginning of the album is actually when he is speaking about a moment that was defining for his future when he was at the frontlines at the war between Iran and Iraq. It was his last day and he had done his service and he was supposed to leave that day so he packed all of his stuff but the moment when he was going to leave there was this attack and he got ordered to do this one last job, which was to send this car with all the ammunition to the front. The song starts with him saying "Death comes when death comes and if I'm going to live, I'm going to live through these 18 hours, and if I'm going to die, I will die at home," He was in this life or death void and he almost lost his leg. So the song starts with this defining moment that led to him leaving Iran and coming to Sweden.

In an interview with Fader you said, "Would a girl like me matter if I were to just sing a love song? Would I still matter in today's musical landscape? Or do I have to be loud and screaming to be heard?" Does that idea factor in your new music?

This album has been a way for me to explore that and now it's going to show if I will still matter. Is it about me being Nadia Tehran or do you actually love the music? Do you want to talk about the harmonies in the songs and the lyrics or does it only matter because I'm a POC musician taking a political standpoint? It's a process of society, you go from being oppressed to being shown in galleries or booked on stage but there's always a sense of questioning the conception of who you are and what it means.

Related | Should The British Return the Stolen Rosetta Stone to Egypt?

Although punk ostensibly stands for inclusivity, certain scenes can also be majorly white and male dominated. What was your experience like?

I think first when I found punk it was so liberating because it was just about breaking barriers and breaking the law which was so empowering, but after a while it is as you say so male dominated and super white and I was trying to squeeze my thighs into these tight black jeans and it was still all these other things that I grew out of. But I took the core of it with me, it's a part of me. I feel like it's a scene that can change and punk is more of a state of mind and it's about an attitude that can be applied to anything.

I see a lot of discussion around the idea of people or artists being "fake woke" or performing activism online without actually organizing in real life. Have you come across this?

It's like appropriation. In one sense it's better to be fake woke than to be a real nazi. At least it's like on the right side but still it's super frustrating and it's still privilege, it's ignorance. It's definitely annoying but it's so easy to see if someone is really doing something genuinely or if it's fake. I can see through it easily and I just feel bad for them.

Your music is sometimes compared to M.I.A. but that seems like an oversimplification since you both have different backgrounds and approaches to music. How do you feel about that comparison? Were you inspired by M.I.A.?

Of course I was inspired by M.I.A and I think that she was one of the most important artists of our generation, absolutely. But I'm doing my thing and she's doing her thing. If people compare us, it says so much more about them than about me or about M.I.A. When you don't have references, that's all you're going to see. I meet people regularly who tell me I look like Laleh, who is also an Iranian singer in Sweden, and I just don't look like her but it's the only reference that they have.

So I think it's just about breaking those limits of who you see and where you see and why you see them. It's also about trying to bring other people with you to give more references. That's why i'm doing the exhibition because it's more interesting to show the context and the wider picture than to just show me. I don't always know what I want or what I feel, I'm just in the process and I'm trying to explore it myself.

What conclusions have you come to after exploring these ideas of belonging and alienation in your music?

I think everybody wants to belong to something. But the question is: are you trying to belong to that something or do you just belong to it? I think that as I'm growing up and moving around the world and connecting with new people who have similar interests, that creates a sense of belonging for me. That belonging fulfills me. But then there's this other sense of belonging when you're trying to speak about nations and ethnicities and that kind of belonging is much harder. We're a whole generation growing up like you and me and our friends and our families who have this sense of rootlessness and feel like they exist in a gap or some kind of void that you inherit. There's a whole generation who feels like they belong to that feeling or that thing, so I don't think that belonging really has anything to do with roots and that liberates me. There's a lot of people out there who feel rootless, so there's a unity you can find in those feelings.