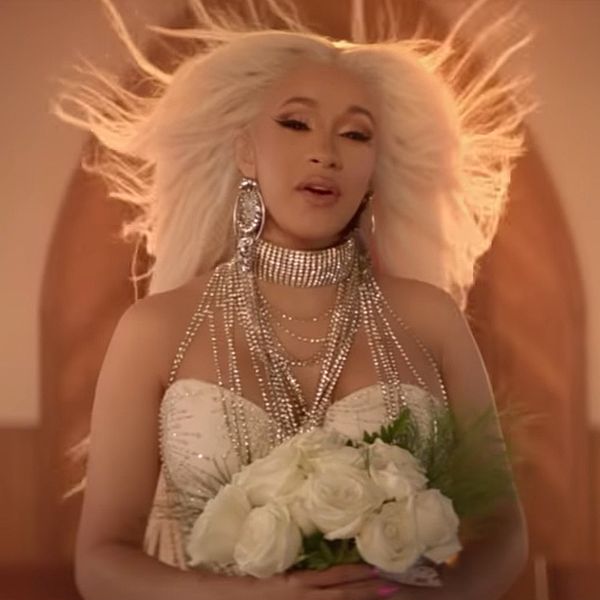 Wedding season is officially upon us. Not only was the Royal Wedding this weekend, but another queen, Cardi B, just released a wedding-themed music video for Invasion of Privacy's heartbreak anthem "Be Careful." While the Royal Wedding was clearly a joyous affair, in music videos, wedding iconography is often adopted by female artists to visually reclaiming the trope of the clingy, marriage-obsessed woman. More than celebrating marital bliss, women have historically used wedding dresses to represent everything from unfulfilled desires, to trauma, to anger, to independence.

Women are socially expected to wait their whole lives for the security of marriage to a partner, often putting their own aspirations and emotional needs on hold to accommodate him in the process. It is refreshing, then, for a woman to adorn herself in a white gown and tell her story, to use the conceit of a wedding as a way to express rage, confusion, sadness, or any messy mixture of her emotions surrounding love, sex, and self-worth.

The question of what it "takes" for a work to be feminist persists and is valid. Critics often ask if big-budget, generally heteronormative, pop music videos could really be radical feminist interventions, or if it they are simply marketing tools meant to sell more records. In many of these cases, both exist simultaneously. Are they unapologetic grassroots efforts to entirely dismantle patriarchy? No, not exactly. But, flawed as they are, they do provide representations of women that don't tie their worth to male approval. Such assertions are especially important in popular culture, which reaches millions and affects our implicit biases from very early on.

While this list is in no way exhaustive, it does sample the variety of ways female artists transform the expectations of propriety imposed on them.

"Be Careful" by Cardi B

Cardi B begins "Be Careful" asserting that she wants to get married, but quickly shows her relationship dying, symbolized literally by a funeral, because her man doesn't treat her well. She shifts adeptly from celebrating to mourning, showing that she is not going to wait around for someone who doesn't appreciate her. The last few shots of the video show Cardi alone. Though she wants to get married, she's not willing to be disrespected to do so.

"Don't Take The Money" by Bleachers

Though it primarily features a man, this video is very much director Lena Dunham's feminist vision. It is glittery, quippy, and expectedly hilarious, showing Jack Antonoff marrying a woman he barely knows, only to be left at the alter and beat up by a combat boot and beret-clad badass who steals his bride-to-be. It's hard not to imagine Dunham laughing at the thought of a clueless and heartbroken man left at the alter because he wouldn't listen to his female best friend's advice (given before the song starts) that maybe he was rushing into a relationship for the wrong reasons. It's also refreshing that the man in the video doesn't save the day here. He's not a protector or a champion, but, even in his own music video, merely a prop in someone else's love story.

"Best Thing I Never Had" by Beyoncé

The "Best Thing I Never Had" video is another smart reimagining of matrimony. It is ostensibly about a wedding, but mostly features Beyoncé looking like a dream alone. She sings, "You don't deserve my tears/ I guess that's why they ain't there," as she shows an ex what he could have had if he had treated her better. So often, when women are angry, they are assumed to be hysterical, unhinged, or irrational. Women should be allowed to be all of those things — we don't have to be composed for our emotions to be valid — but it is nonetheless empowering to see a woman who is clearly furious, but is also simultaneously articulate, thoughtful, and, ultimately, in control of her own narrative.

Madonna transforms a song nominally about virginity into a celebration of her sexual liberation and freedom. She sings that she feels, "like a virgin touched for the very first time," making it very clear that she is not, in fact, a virgin. Pair that revelation with the visual representations of matrimony, an occasion women are traditionally supposed to wait for before having sex, and Madonna boldly redefines what female pleasure and propriety means and looks like. It is not a woman being forced against her will to be "innocent" and sexually inexperienced until marriage, it's Madonna donning a wedding dress because she wants to and talking about the great sex she's having.

"Simple Kind of Life" by No Doubt

Gwen Stefani boldly embraces her vulnerability in this song. Women are often shamed for seeming clingy and needy when they simply state their emotional needs and desires. So many times, the fear of being perceived this way pressures us into ignoring or hiding our emotions. It is exciting to hear Stefani's full range of desires in "Simple Kind of Life." The end of a relationship leaves her feeling ashamed, lonely, and heartbroken. She wants to be a mom. She wants to wear a wedding dress and smash wedding cakes. (As is often the case with white feminist texts, though, the progressiveness of this video is limited. There are some questionable white savior moments at the end when she finds a brown baby on the street, which she eventually hands off to a woman of color to take care of, making it seem like her emotional and romantic liberation comes at the expense of that woman's labor).

"Behind These Hazel Eyes" by Kelly Clarkson

Kelly Clarkson admittedly feels a little bit like an odd ball on this list. It's unclear if this video was explicitly meant to be a feminist intervention, but it makes the cut because 1) I love the show of raw anger and hurt 2) It. is. so. catchy. Again, though Kelly is clearly distraught over the end of a relationship, the video rarely focuses on the man who caused that pain. In fact, we see a mud-drench, grief-stricken almost-bride comforted by another version of herself that is playing a guitar and singing, showing that Kelly can be her own savior.

Lizzo's dream wedding has very little to do with finding a man and a lot to do with dressing up, looking fabulous, partying with her best friends, and celebrating herself. The looks in this video! The hazy nostalgic glow! The dance moves! All of the non-wedding related details infuse the video with so much joy that the twist ending, that she's marrying herself, is almost secondary.

"Slip Away" by Perfume Genius

This gorgeous, kaleidoscopic video isn't explicitly about marriage, but rather about the importance of the "intimate, blood-oath kind of friendship" singer Mike Hadreas has with his female friends. The fact that one of the people in the video wears a flowing white gown feels intentional here. In a society that imposes the expectation that a romantic partner is the only important person in one's life, there are so few rituals to celebrate the myriad people we need as friends, companions, advice-givers, and confidants. What better way to do that than by donning a dress reminiscent of a wedding dress, picking peaches, and protecting each other from anything and everything that comes in the way of your relationship?