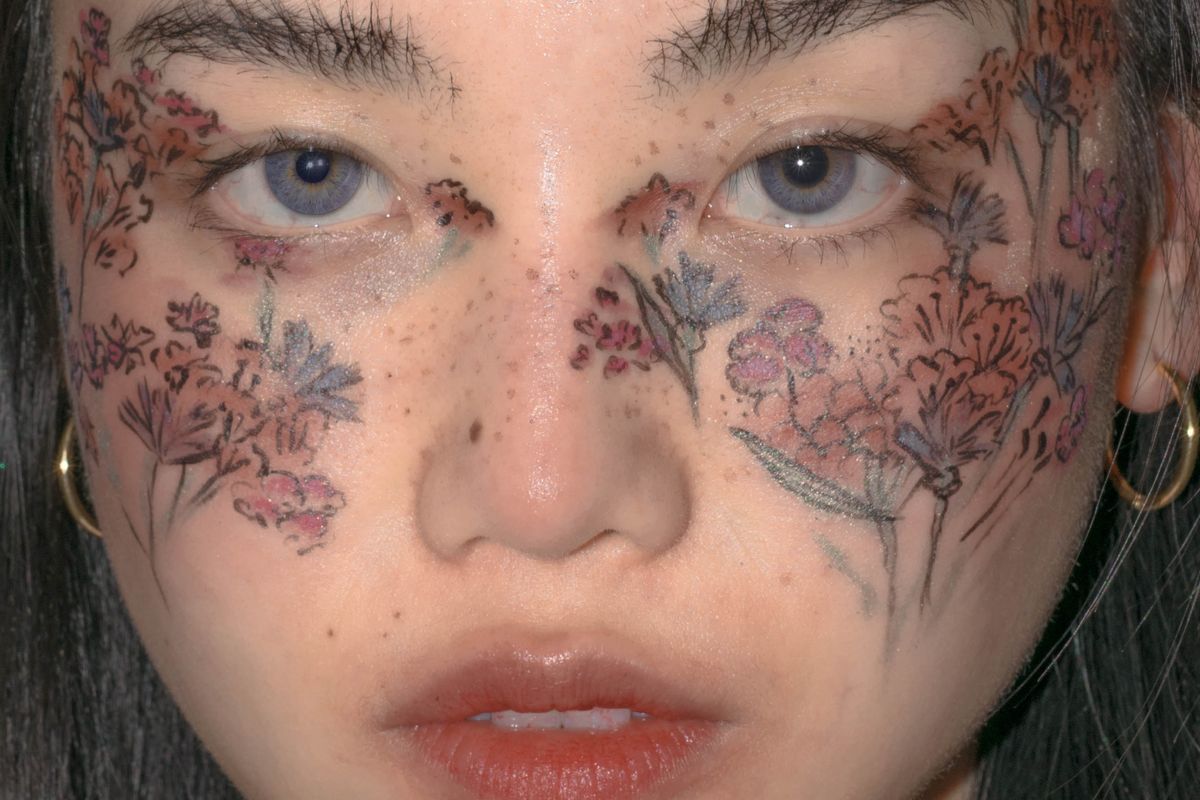 The intricacy of the flowers on her face alone implies thoughtful consideration; that Korean artist MLMA pairs the delicate blooms with blurred lips and messy brows suggests strategy. While immediately striking, there is a rawness in that particular image, too — and it's because it wasn't totally planned. "When an idea comes to mind, I do it. I never squeeze my head too hard to get my art," MLMA tells us.

While there's little calculating in her visuals, there is a goal beneath it all. "I just enjoy making viral posts to be honest," she admits. And they do go viral — the wavy brows, for one. Yes, she invented that, and whether or not you're down for the wavy brow, thousands upon thousands of new followers were.

The fact that she's amassed nearly 150K followers while churning out visually striking, incredibly innovative art is a genuine product of MLMA's genius. These images can be unsettling, especially when moving parts are involved — like the profile shot with hand, middle finger up, slowly extends from her open mouth, and MLMA is eerily looking right into the lens. You get the feeling she could jump out of your screen, but it also feels like a nice f**k you to beauty standards, art standards — all standards. Her caption reads, "R u upset?"

She also rolls out trippy repetitions, like overlapped MLMA multiplicity, or just doubles herself for a two-headed MLMA, one of them on a platter. Her Instagram is rife with abstract neon overloads too, and body modification style looks with split tongues and shoulder horns.

Outside her Instagram mastery, MLMA is also the main designer at SKOOT, a Korean streetwear brand who discovered her at a solo exhibit in Toronto. (She lives in Canada half the time). MLMA also has a hand in other aspects at SKOOT, and maintains another Instagram for another, less clearly digital artistic output. This summer she's got a collaborative exhibit lined up with @postofficesound. It's been a while, but she also makes pretty slick hip-hop tracks.

PAPER got into those details with MLMA, and learned a bit more about her background, her aesthetic, working with SKOOT, where she's at in music-making — and more.

At 22, you left your job as a fashion designer to make art full time. Can you tell us more about that?

I quit my designing job in 2014 to pursue my career as an artist. The job was terrible. I only worked there to learn the on goings behind the scenes. Obviously this wasn't my dream job and I always had aspirations of designing for a proper designer brand with a more artistic aesthetic. The job was absolutely mind numbing. It required no thought, with no flexibility in design. True story: One time I designed a shirt that said "FANCY" in an elegant font and it sold like crazy. Then someone mistranslated it using Naver (a Korean search engine that actually never works for anything in the history of anything), and claimed, "Fancy meant whore." I nearly lost my job over it. That was the day I was done working in the industry.

What was it like to transition from that into art?

The transition was difficult, of course, financially. Luckily I found a good support group that helped me through it. They saw my talent and really encouraged me. I was then found by a new brand looking for a designer and the rest is history. SKOOT has been very supportive of my vision and have given me complete freedom alongside their team.

What made you decide to return to fashion design?

The decision was easy! They believed in me. I was actually allowed to make the quirky things I could never make for any Korean brand.

What perspective do you bring to SKOOT as a designer? Are you designing only, or also directing others and managing the general selection?

They approached me to design for them after a solo art exhibit I held in Toronto. They were stunned with the concept and employed me immediately. I have complete control over the products. From how and where they're produced, right down to the buttons. I do other various things for them, like model and styling. They've been like a family to me so it's no longer work.

In some looks, you have letters on your face that Can you tell us about those, and point out what some of them mean?

It's Chinese. It's on my ID card and thought it looked cool! I actually don't know any Chinese at all. I've been called out saying it's written backwards. That's because I write it in the mirror so naturally it would be [laughs].

Your work resonates widely — the jaw-drop reaction to seeing your visuals is pretty universal. Do you have any thoughts on why your work is so mesmerizing?

I think most people are mesmerized because no one is doing it. No one really brings the sort of look I do. They're always overproduced or over-edited it looks like an advertisement or something.

Can you go into some of your influences as an artist? How would you describe the work that's posted separately on @mlma_art?

My life and situations influence me. I don't get influenced by art that's been done before. The work on @mlma_art is 100 percent me. That's what I would describe as the purest art I do.

In your Vogue interview, you mentioned growing up very poor. What would you say to someone who comes from a similar background who might consider that position a hurdle too difficult to overcome as an artist?

Let's get real. I had no going back — no degree and no options. But that made no difference to me. I knew art was my ticket in this life. I'd fail at every other thing and would rather die than do anything else because I can't do anything else. I don't do art because it's a means to success. I do it because I have to — it's that itch. It's the only thing that makes me happy. So my advice is do what makes you happy no matter what your circumstances are. But if you're born rich, then you go Glen Coco.