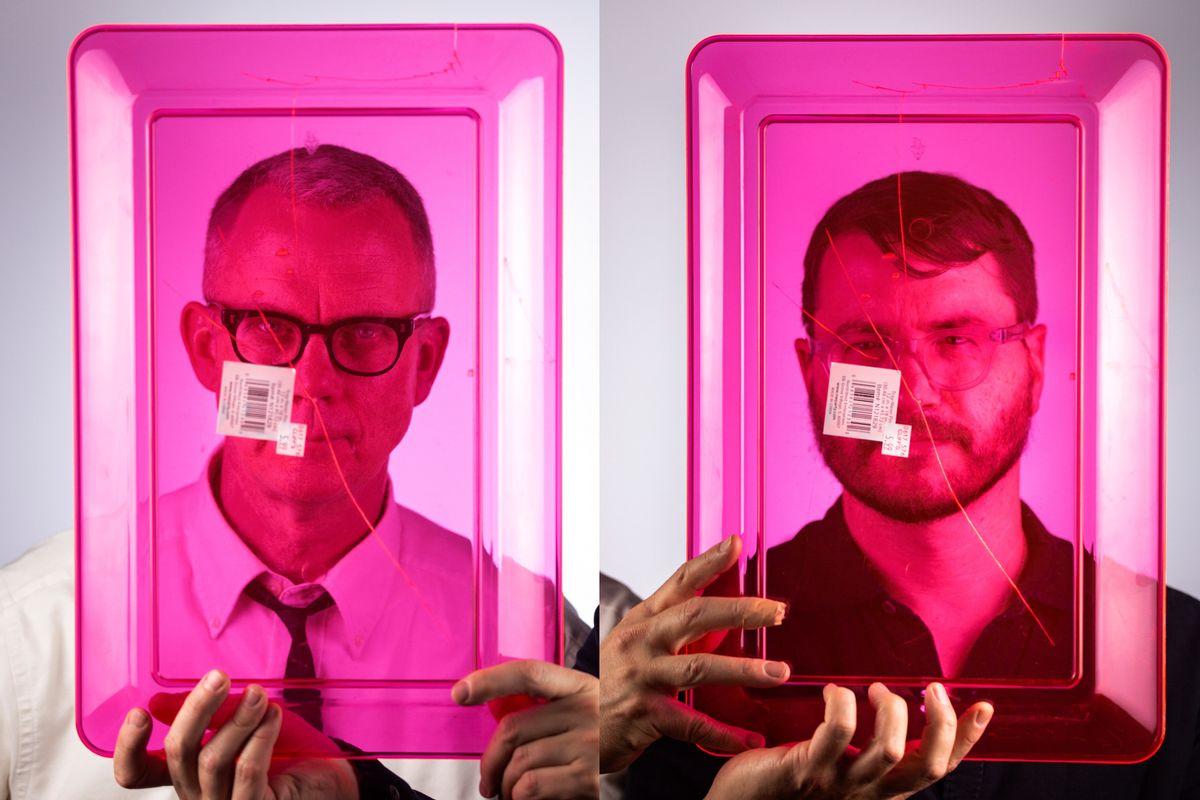 It's no secret that love can bloom on the dancefloor. The right time, right place and a perfect song is sometimes all it takes to spark a romance for the ages but what about the selectors behind the booth? What happens when you music partner is also, well, your partner? B2B is a new series celebrating queer couples in the world of dance and electronic music whose love brings their work to another level.

Baltimore by way of San Francisco experimental electronic music duo, Matmos, are never at a loss for ideas. The collaborative project of Martin C. Schmidt and Drew Daniel, Matmos has become widely known for its concept-driven approach that has seen the two make music using the sounds of an operating room, a washing machine and even telepathy. Their most recent album, Plastic Anniversary, was made entirely by sampling various plastic items, ranging from a silicone breast implant to a police riot shield, and processing the hell out of them until they are almost unrecognizable.

The strange, often out-of-the-box ideas for Matmos' records provide a compelling hook — their newly announced upcoming album The Consuming Flame: Open Exercises in Group Form consists of collaborations with 99 artists, including Oneohtrix Point Never, Yo La Tengo and clipping., all set at 99 beats per minute — but it is the intricate and playful symphonies that spring from these concepts that make them more than just a gimmick.

In this latest installment of B2B, we asked Schmidt and Daniel to reflect on their 27 years together, from satanist-sponsored punk shows to Shakespeare and the secret to perfect scrambled eggs.

Martin C. Schmidt: I first met Drew by reputation. He was my boss' boyfriend at an 18-and-up gay bar and restaurant. The boy I was very crushing on (also kind of my boss) was in love with Drew, and "when he gets back (from Oxford University) you'll see how hot and smart he is." Sadly for him, and nicely for me, Drew was more interested in me than him... though I don't think that stopped lots and lots of sex, as my crush was... real cute. And my boss, well he also could take care of himself... in many messy ways. We were all friends. It was the best of times, it was the worst of times. Not everybody lived through it... but a lot of folks had a lot of sex, and some love too. Drew and I for 27 years now.

Drew Daniel: I saw Martin's band IAOCORE play at a punk club (Gilman Street) in Berkeley at an event sponsored by an Aleister Crowley cult called the OTO. His band was freakish but he was really cute and seemed very out of place, like a narc or something, he just seemed so unlike his bandmates but also intriguing because he seemed aggressively "normal" in a context in which everyone was trying so hard to be "weird." The first time we talked we got into an argument about capitalism and he annoyed me because he pushed back a lot, but it was charming too. I just knew that there was something spirited and free about his way of living that I envied. He was tall and blonde and that helped, I'm not going to lie.

Martin: I cook and clean and Drew is a Professor of English Literature at Johns Hopkins University. He has a glittering life of the mind, and I have a life of filth and degradation. When I'm not serving him fine gastronomy or cleaning up afterwards, we find time to pursue our career as electronic musicians under the name "Matmos." For 27 years we've made music primarily by sampling sounds from the real world and turning them into "real music"... a troublesome description of any organized sound, perhaps. At any rate, sometimes it works on the dancefloor, but mostly not. We've made songs out of some pretty crazy sounds! Surgery, animal skins, human excreta, washing machines, plastic, snails, as well as orchestras, small and large, jazz bands, string quartets; we've played as Matmos to as many as several thousand, and as few as... well, we've definitely played in empty rooms. We've played in at least 15 countries and sold tens of thousands of records... probably not hundreds of thousands, but I'm happy. He has to clean up my songs and vice versa.

Drew: Martin and I are so deeply intertwined after 27 years that I don't know where I start and he begins. We have accelerated and intensified some parts of each other and sanded down some parts of each other too and in the process we're something else maybe? William S Burroughs and Brion Gysin used to speak of a "third mind" that emerges in collaboration and that's what I think we tap into when we're just playing music together. Time speeds up. As far as the basics, we share certain responsibilities, split up others. I pay bills more, Martin cooks more. I scoop the cat poop, Martin takes care of the car. I'm more into tragedy and high drama and Martin wants comedy. I'm a moody introvert and Martin's a chatty extrovert. Martin is charming and kind of funny and I'm sometimes at risk of being pompous or pretentious (side effect of being a Shakespeare professor?). We have traveled the world together making weird ass music that is certainly too strange to have been as successful as it has turned out to be, which is not to brag but just to say that it has exceeded the wildest possible projections we might have made when we started doing this stuff in the early 90s. We love each other. Right now because of quarantine and because I'm trying to finish my book he does too much cooking and I feel bad for kind of turning him into my housewife. I swear I'm not a jerk! But all jerks think that, don't they?

Martin: We thought each other were hot and we wanted to have sex. The music thing was just kind of an excuse, but weirdly, the music thing turned out to be a deeply fulfilling endless fascinating pursuit. Sex? Well, I'm... not as fascinated by sex as I once was, that's for sure, and it's a relief! That's just me, though, certainly!

Drew: Like I said, the first time I saw Martin I was just kind of transfixed. He seemed hyperreal. He seemed like he had just landed on earth from some other time or planet. There was something so polite and normal about him and yet very odd. He's just not like anyone else that I know. I liked his band and wanted to figure out what his deal was. I'm still not sure. When we started making music together, it felt more like working on a jigsaw puzzle or a collage than "songwriting." We just edited tiny noises and took turns adding things to a long knotted string of strange sounds. It was delightful to me, it felt like a fast conversation that you hope keeps going and it did.

Drew: There's huge positives and dark negatives. It's so fun to make something together and see a form emerge and it's so scary to be really vulnerable and be known that deeply by someone because you can really hurt them and they can really hurt you. There's no escape and no hiding and sometimes it sucks because you have to fight your way through to a form that seems right to two people. You can't just be a control freak and force the issue, it has to actually sit with both of us. We've made albums for decades but there are no shortcuts to art that actually clicks into place. It's always a new starting point.

Martin: Originally I taught Drew how to use a computer sequencer, and now I have to ask him how to use it. I have learned from him that it's OK to spend money (if we have it) on music stuff. I'm not sure beyond the original lesson in Performer 1.0, that he has ever learned anything from me.

Drew: Martin taught me how to sequence with MIDI properly, and how to edit audio on a computer and how to make perfect scrambled eggs. He also taught me how to grow old and not become a boring asshole in the process. I'm still working on that one. Middle age can be gnarly.

Drew: Nina Simone singing "Something To Live For," written by Billy Strayhorn, the greatest queer songwriter in my opinion.

Are there couples you look to as role models for your own relationship? Your work?

Drew: I used to think of Coil as a model for the kind of life that I would want for myself. It was jarring but lovely to actually meet them as human beings and step out of the fandom framework.

Martin: Well, functionally, so it's less likely that I'll have the shit beaten out of me. I mean, if people have met and liked someone from a... marginal group, they're just less likely to hate those folks as a group. I lived a lot of my life in San Francisco so I had never really known what it was like anywhere else, in terms of this. When we moved to Baltimore, I realized that in the "noise" music scene, which on the whole was very sweet and welcoming to us there hadn't really been very many or any queers as part of it... and this realization and some of the bizarre assumptions and attitudes that I encountered were... surprising, but everything worked out fine and we all learned a lot and it's fine... like a TV show... with fucked up music.

Drew: I think visibility matters, because the more queers there are out there, the more diverse what it means to be queer will get, and it won't be the same old formulas. There just aren't that many models of what queer love even looks like, let alone queer couple bands. Bring em on!

How are you celebrating pride under quarantine?

Martin: It's true... I'm not sure what that would mean.

Drew: Loving my man and surviving. I think defiance is more important than pride right now. This country is fucked and sliding further and further into fascism. Anything that contests that is worth fighting for, but people are so scared. We need to fight back. We don't need rainbow capitalism and honestly I won't miss that aspect of "pride" at all. Same with rainbow cop cars or whatever mainstream garbage the Pride parades used to put up with for the sake of inclusion. Cops are not the friends of queers and they never have been. Stonewall was a protest against cops. Do I need to go on here? This should be obvious but sadly some white gays are so close to the picket-fence-or-bust ideal of normativity and they can't snap the fuck out of it.