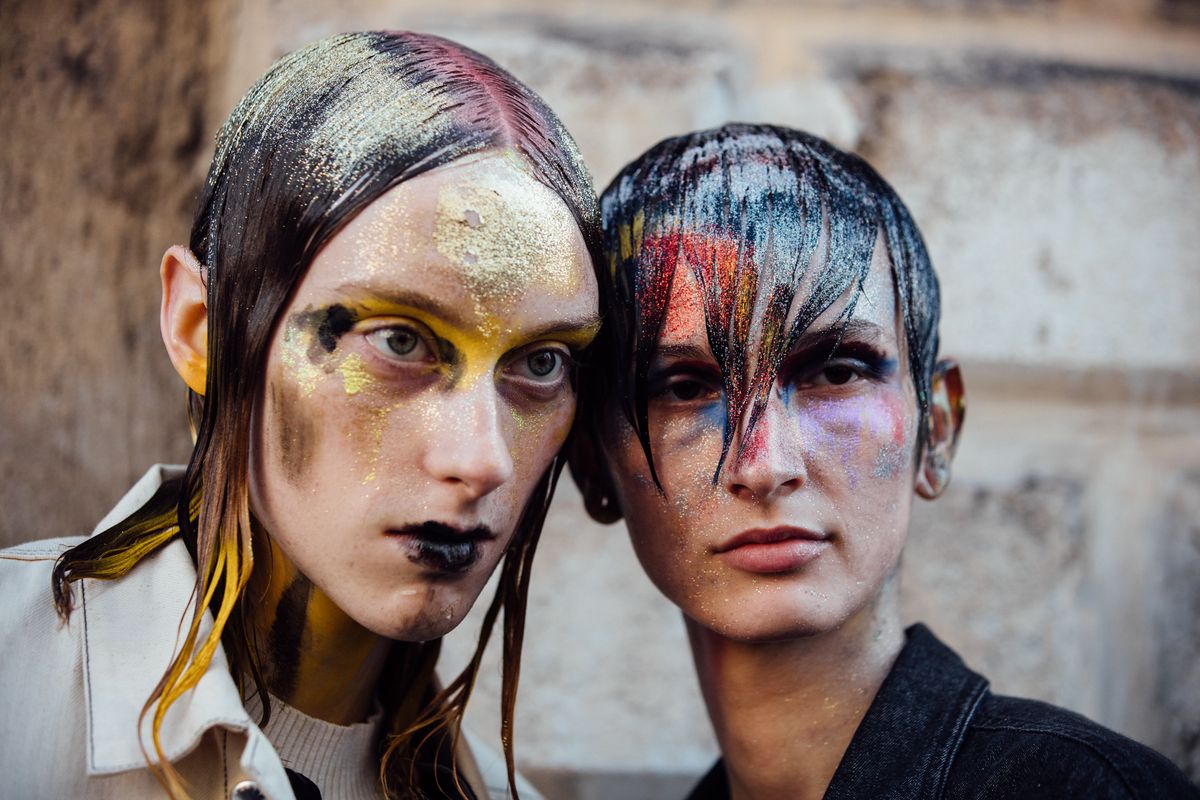 On February 21st, Marni creative director Francesco Risso presented an Alice in Wonderland-themed collection in Milan. The clothes, patchworked leather and calico, were roundly praised – Risso has been widely credited with breathing new life into the storied house since he became its creative director in 2016. But a great deal of the buzz surrounding the Fall/Winter 2020 show also centered around its beauty looks, created by the famed Julien D'Ys. Models sported hair matted down with glitter and paint, sparkles slathered across their foreheads and noses, vivid swaths of eye shadow, and purposefully obvious marks of contour. Vogue deemed the aesthetic "a fashion week mic drop" and "pure magic."

When New York artist Leah Hennessey was sent images of the show on Instagram, she had a different reaction. Hennessey, whose resumé incorporates everything from music (she has an eponymous band) to acting (she's perhaps best known for a satirical YouTube series, beloved in the art world, called Zhe Zhe, and for co-writing and starring in last year's play Slash), recently put on a limited-run play at MoMA PS1, Star Odyssey, with frequent collaborator Emily Allan. They performed Star Odyssey just three times, the weekend of January 24th, and it received no press coverage. Hennessey was struck by similarities between the hair and makeup from her production, designed in collaboration with hairstylist Mike Martinez and makeup artist Veronica Ibarra, and the look of the Marni models. She began watching videos of the Marni show, and says that she also found similarities in the sound design – both feature a whispering voice over thumping beats over alien-like techno, though it's not an exact match – and their mutual Space Age sets, which both incorporated spaceship-like tinfoil (Star Odyssey's set was inspired by a recent artist residency in Cern, Switzerland, home to the particle collider).

Star Odyssey is what Hennessey calls a "Star Trek pastiche," a millennial take on a space narrative in which entire planets are controlled by the likes of Zappo's, the Fung Wah bus, and Diptyque. There are two main characters: Allan's Captain Quinn, who mans a one-woman ship with the assistance of a HAL-like computer, and Hennessey's Meno, an android. As Hennessey puts it, Quinn, in "true millennial fashion, doesn't actually do any work. She just performs the emotional labor of being alone in space," recording captain's logs as confessional YouTube vlogs. Meno, designed to be super-intelligent, has one significant defect in the form of an "aberrant sexuality;" the android can only gain sexual satisfaction through the acquisition of knowledge, mostly surrounding English romantic poetry.

When it came to the play's aesthetic, Hennessey and Allan's choices were as deeply considered as the writing. "We were more interested in my being self-consciously an actor, as an android," said Hennessey. "And we were talking about how to visualize Meno's sexual obsession with romantic poetry, and how to bring that into an android context." She hoped to "evoke high romance but make it structural and stiff and robotic."

She began conceptualizing Meno's look with Martinez and Ibarra by sending them images of a Botticelli's "Madonna of the Pomegranate," ("I knew he would know how to approach Botticelli coiffure as an immovable sculpture") for the hair, and an outtake from David Bowie's Scary Monsters and Super Freaks album cover shoot and the idea of a Dangerous Liaisons-esque "campy aristocrat" for the makeup. Martinez had worked on a Margiela show in which the models sported helmet-like heads of glitter, and he worked with Hennessey to change up the technique to make it what she called "romantic and messy." In an email from Paris Fashion Week, Martinez wrote that he felt it was his job to pull from the Botticelli reference and "add some cosmic flair," to "give a nod to some of the really graphic shapes from some of those old sci-fi books and films."

"Marni's flattened hair and glitter were a close match [to Star Odyssey] as well as the makeup details," Martinez wrote, calling the parallels in the looks "unnerving."

In a pattern now familiar to many underground and independent creatives who see parallels between their work and that of larger brands, Hennessey said that she started receiving messages from various friends and colleagues noting the similarities between Star Odyssey and Marni soon after the show. It took an outside eye to make me realize how exact the copy was," she said. "And it took a minute to put it together that we weren't being solipsistic and paranoid."

Hennessey has worked in fashion, advertising, and for a prominent music video director, for whom she made treatments. She has made countless moodboards (which, as she notes, sound like a sort of Project Runway parody to a layperson, but are actually essential in creative fields) and is familiar with the way the creative process works, noting that once something is online, you no longer own it. Her particular breed of practical slash appropriation artist-friendly beliefs run counter to Diet Prada culture, in which referential inspiration made fresh is often denounced in the same breath as blatant copying.

In addition to the common practice of mega brands like Zara, Fashion Nova, and Gucci drawing inspiration from copying smaller designers (usually those without the money to launch a copyright infringement lawsuit), clothing lines copy artists all the time. Internet artist Brad Troemel kicked up an Instagram storm in 2017 when Russian designer Vika Gazinskaya used images from his "Freecaching" show without permission; in 2015, visual artist Kesh sued Versace after the brand released a suspiciously similar-looking–and far more expensive – version of a t-shirt she had designed for American Apparel.

"Anything adjacent to fashion and the arts is so self-cannibalizing that you get kind of immune to breaches of creative [trust]–you just get kind of used to slightly ripped off all the time, and you know that if you put something out into the world, especially the internet, it'll be on a moodboard," Hennessey said. "And I've worked in many fields where I've been the one making moodboards, and I know how that works. And so for me to even make a post about it or even tell anyone about it, I had to have a very clear vision of just how thoroughly and specifically they had copied us." As Julie Zerbo, attorney and founder of website The Fashion Law, has noted, the line between imitation and inspiration can be hard to judge.

Crucially, Hennessey isn't angry (though she, of course, wants credit). She's just interested in where this conversation leads us next.

"I think it's worth making public not because it upsets me, or I think it's a violation or anything like that," she continued. "But it feels sneaky, and it feels sneaky because our play had so little opportunity for exposure. There was so little access to it. And because we didn't get any press, and because there were not extended clips of the play online, it almost felt like a private affair. It was something that only happened three times, there was very limited seating, and it's something we'd like to take somewhere else. And I don't think any hair or makeup is original, everything has been done before. But I do think that there was some freshness to the look of our play. And all the decisions we made aesthetically were so informed, and had such meaning to us.

Reps for d'Ys have not responded to requests for comment. A publicist for Marni–the brand's Milan headquarters have been closed in the wake of the coronavirus outbreak–referred us to the Fall/Winter show's press release, which does not reference the beauty looks or sound design. A representative from the firm that handled Marni's set design, Stefman Beckman Studio, said that they were not familiar with Hennessey's work. They added that Beckman initially met with Risso on January 24th, ahead of the play's premiere in New York, and that they both inspired by images of communes in the 1960s, noting differences in the Star Odyssey set (the Marni set did not include this Jetsons-esque coffeemaker).

It can be difficult to pinpoint who owns something in fashion – everything starts with something else. But there are some strikingly similar aesthetic choices between Star Odyssey, a small play from emerging artists, and Marni's expensive show.

"As someone who works in fashion and advertising, I know this happens all the time, said Hennessey. "And even if we do get press, we are struggling, underground artists. And they're a big fashion company, and the unevenness of power there is really glaring. They could have easily said that this show was inspired by a cool play at PS1, called Star Odyssey. And they would never do that, but that would have been really good for us. And the fact that they said the show was about Alice in Wonderland felt like deliberate obfuscation. It seemed like a reference to the clothing, and the fact that they came up with a completely different concept to lay over their collection is what made it seem obvious that it had no meaning to them."