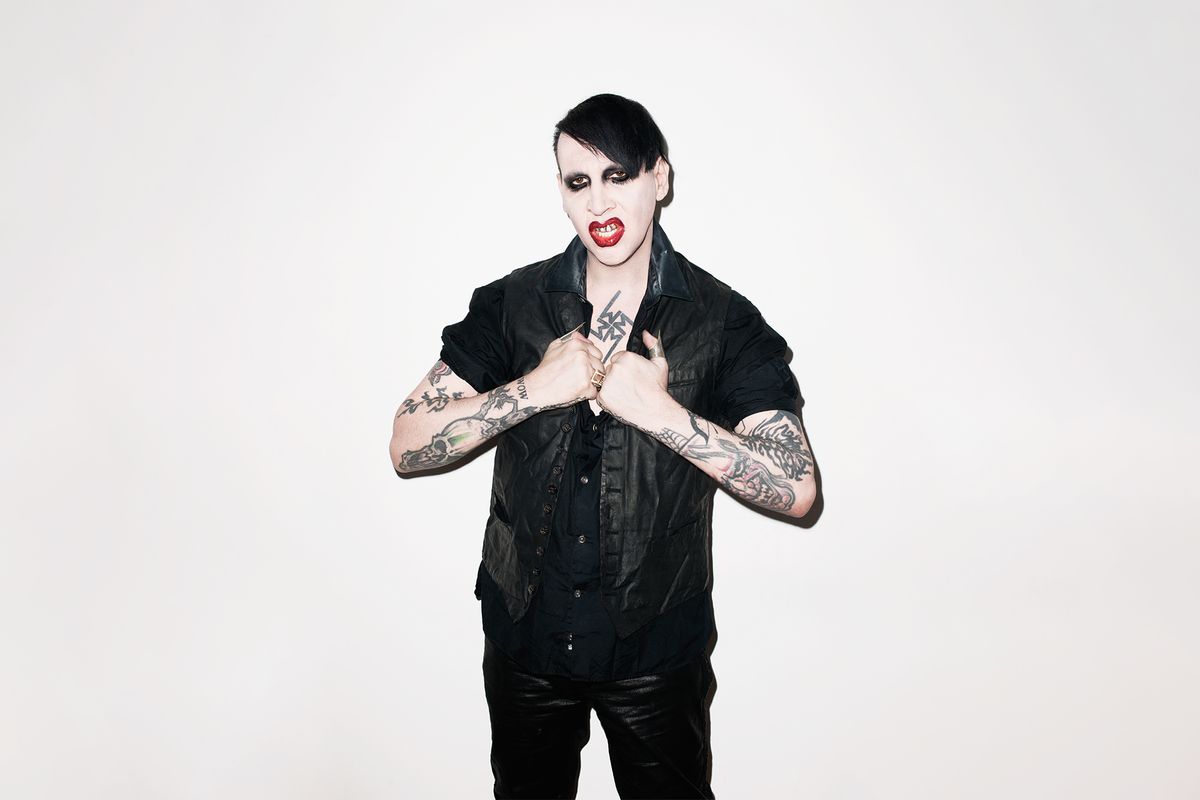 Marilyn Manson Shows Us His Soft Side

by Kory Grow / Photographed by Terry Richardson
PAPERMAG
Earlier this year, Marilyn Manson's father gave him a birthday gift that shocked even him: his report cards from Christian school. "They were all A's," says the singer, seated in the dimly lit restaurant of a luxury hotel overlooking Central Park, late on a Sunday night. More surprising than his grades, though, were the notes his teachers wrote. "Brian is a very courteous, sensitive and serious young man," said one. (Manson's birth name is Brian Warner.) Another offered, "Brian shows an enthusiasm for the Bible and is very considerate of his fellow classmates." Manson laughs.

By age 15, young Brian had grown skeptical of religion. Since the first grade, his teachers at Canton, Ohio's Heritage Christian School had been hammering him with visions of the Antichrist triggering the end of the world. "It didn't happen," he says, treating the lessons like broken promises. "So the disillusionment caused embitterment." Within the decade, Brian Warner would become Marilyn Manson, the self-proclaimed God of Fuck, the All-American Antichrist, the Born VillaiFew artists have stuck by their iconoclastic convictions as long as Marilyn Manson, now 46. Since emerging as the world's most welcoming scapegoat in the '90s, with belligerent anthems like "The Beautiful People" and rumors of horror-show concerts that featured him cutting himself and shredding Bibles onstage, the singer has become a hero to the downtrodden and an enemy to moral America. Now, with a newfound confidence that came in part from recent upheavals in his family, Manson has recorded a profound and morose LP that could change even the most wary listener's perception of him.

The Pale Emperor -- named after the first Roman ruler to deny God, Manson gleefully offers -- finds him at his most vulnerable, singing about feeling alone ("The Mephistopheles of Los Angeles"), the inevitability of death ("Odds of Even") and the repercussions of violence ("Killing Strangers"). The music no longer bludgeons listeners with industrial rhythms and metal riff plonking but, thanks to mournful gothic guitar lines and spacious arrangements by co-producer and co-songwriter Tyler Bates (best known for his Guardians of the Galaxy and 300 movie scores), it makes its points with relative subtlety.

But that's not to say he's lost any of his biting wit. When I tell him that his pallid face will be gracing the "Beliefs" issue, he quickly rejoins, "'Lie' is right in the middle of that word."

It's close to the witching hour, and Manson is appropriately dressed in head-to-toe black, nursing a double vodka at a table he selected for its poor lighting. Having just completed the photo shoot for this issue, he has cleaned most of the makeup off his face, leaving dark penumbras around his eyes. As he speaks, which he does surprisingly quietly, he darts from topic to topic -- excoriating here, punning there -- at lightning speed.

As it turns out, Manson's core beliefs are the same as ever. When the topic of religion arises, he leans back and recalls 1996, the year of his platinum Antichrist Superstar LP. "I had a real hard-on against organized religion," he says. "I don't think that's gone away, but I express it differently. I know 100 percent that there is a cause and effect to every action you do, and freedom of speech does not come with a dental plan."

David Bowie's "Modern Love" fills the room. "That's a good record," Manson says, before returning to his labyrinthine line of thought: "It is quite arrogant of man to create God and say God created man and then expect the world not to come to an end. I think that is quite foolish of man. Even if you did know the answers to life, would you tell everyone? That is the eternal question: To be or not to be an idiot." He pauses and sings along with Bowie -- No religion. "I love that this kicks in as our soundtrack," he says.

Although he soured on religion in school, Manson is open to supernatural stirrings. "I do believe in things beyond our understanding: aliens, angels, demons, whatever they are." He says a house he stayed in while making The Pale Emperor was haunted ("the door would shut behind me, and I would hear things bouncing up the stairs") but, in typical Manson form, he adds, "I ain't afraid of no ghosts." He sees love as a positive energy, and he believes in dÃ©jÃ vu, alchemy and astral projection, though he says he doesn't like addressing those topics with the press. "Do you sit around drawing circles with pentagrams and light candles?" he says. "That's for the uninitiated. That's for the fools."

Manson's right ring finger wears a ring with a pentagram in a black oval. "That's from Angel Heart," he says with a shrug, referencing the 1987 Mickey Rourke film. The man who joined the Church of Satan early in his career then says, "I may have this ring, but Satanism, shit like that, it's whatever." But that doesn't stop him from pulling out his phone to play a clip of an audio analyzer showing that his voice has five tones in it -- impossible to Auto-Tune -- which graph out a visible pentagram on the screen. The friend who showed it to him said, "This is empirical proof that your voice is of the Devil."

Manson's "Hell Not Hallelujah" tour finds him playing a relatively stripped-back set. Gone are the stilt-walking freak-show stunts and dictator-podium speeches of decades past. At New York's Terminal 5, a few days after our interview, Manson makes his entrance from a fog, like a specter. Props and set dressing are spare: glitter bombs, a mic-knife combo, banners bearing his Cross of Lorraine signet ("As above, so below"). He jokes between songs and even sneaks in a Justin Timberlake line before "This is the New Shit." But he mostly balances his swagger with moody new music and saturated red lighting.

Although the vestiges of Manson past are still present ("There's one thing I learned in rehab," he says at one point, "Fuck Jesus!"), he has clearly entered a new, more mature phase.

"I'm a rock star; I'm not a celebrity," he says back at the hotel. "There's a difference, and that's a definition I try to make clear on this record."

By his own estimation, the reason Manson has re-upped his style is that he wanted to change. When our conversation turns to muses -- something Manson believes in, though people who call themselves muses are "succubae and harpies"-- he says he doesn't look at his girlfriend, photographer and model Lindsay Usich, as one. "I wouldn't say so much a 'muse' [inspired the record] as it was me trying to regain myself," Manson says. "It was a tough year romantically in the sense that, when I turned myself upside down, it was hard for people really close to me -- because one day I said, 'Tomorrow I'm going to change my entire lifestyle.'" Accordingly, he shifted his vampiric clock to start waking up in the morning, stopped drinking absinthe and started going to a trainer ("to kick people's asses if I need to"). "I liked the power of being in control of my life," he says. "I don't have to be tortured to be an artist. This year, I was not tortured."

He pulls up a photo of Usich on his phone and puns, "Amusing."

One thing weighed heavily on Manson while he was making The Pale Emperor: the death of his mother, Barbara Warner. For years, she had been suffering dementia; she passed last May. He has said that album closer "Odds of Even" came from her death, and in our conversation he calls it an epilogue, a reminder that "you die alone." Family now seems to matter more than ever to Manson.

Ultimately, his mother's death brought him closer to his father, Hugh Warner. When I tell Manson that I saw him in Denver in 2001 -- his first post-Columbine concert there, which prompted death threats and protests -- he recalls, "Everyone I know, including Hunter S. Thompson, said, 'Don't go onstage.'" He had brought 40 plainclothes policemen with him and decided to play anyway. "My dad said it best: 'If they wanted to kill you, they wouldn't warn you in advance,'" Manson tells me. "And he would know, because he fought in Vietnam."

When Manson brings up his dad, he exudes happiness and awe. Lately, the shock rocker has been talking to the elder Warner a lot more, about his service in the military and "a lot of things we never talked about before." For years, Manson had been trying to persuade his dad to move to L.A. to be closer; getting a role on Sons of Anarchy, Papa Warner's favorite show, did the trick. Now they're sharing deep conversations and Manson is learning new things about his family. His father drove to L.A., for instance, to spread his mother's ashes along Route 66 -- her favorite place, "which I never knew."

Driving home Manson's expressions of filial love is the fact that, during our interview, Hugh is in the adjoining lobby. At our cover shoot, Manson's father put on the singer's makeup. "That's a good Ghost of Christmas Future," Manson says, laughing. "When I see pictures of my dad, I'm like, He looks like me. The first time I saw my dad in makeup was, ironically, the second concert I ever went to. He dressed as Gene Simmons and took me to the Kiss 'Dynasty' tour when I was 11. And people were asking my dad for his autograph."

(I had one interaction with Hugh. As Manson and I left the interview, the elder Warner called out, "You know, he came from my nut-sack.")

Manson with his father, Hugh Warner.

At close to two in the morning, Manson's manager reminds him that, per his new routine, he needs to wake up early the next day, which the singer laughs off. Despite all his past controversies, Manson now appears to be at peace, in charge and suffused with something you'd be forgiven for calling family values. "I saw the mortality in my family," he says. "I think I found a responsibility there, a responsibility to myself. I didn't want the story to end piss-poor. I just didn't want to be something less than I was supposed to be."