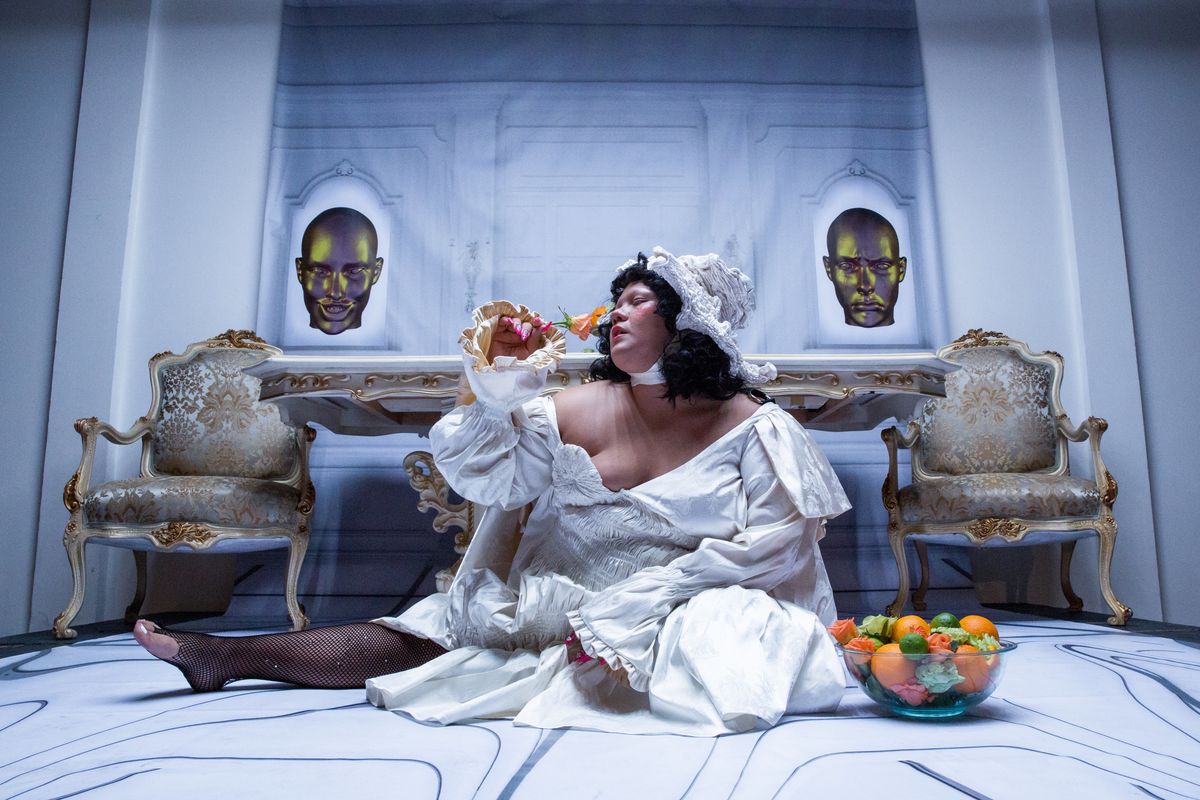 Declaring someone "fake" is one of those ultimate character attacks; in that context, we're basically saying the fake person is deceptive, malicious, cold-hearted, and selfish. When we're misled by a fake person, we think less about their reasoning than our own hurt feelings. But aren't a lot of us guilty of the same tactics sometimes? Don't we all wear masks — some more opaque than others — at different points in our lives?

Smile Now, Cry Later, the latest production from the creative studio of fashion house Maison the Faux, explored what happens when such a mask fuses permanently, and it also asks why. Working with the skeletons of a show, the seven-scene meta-play, realized most recently on Oct. 5 in downtown L.A., featured actors struggling to find their best take on a particular character, with some even jockeying for the same role. While rooted in an analysis of the line between character and performer, the production alluded to the audience's — or anyone's — everyday acting, too.

"Everybody in this world struggles with staying true to themselves," Maison the Faux designers Joris Suk and Tessa de Boer note. "Being original and not compromising who you are is one of the hardest things to do, but at the same time it's one of the most important things in life to explore. The performance was very much based around this struggle. Each role and scene revolved around the questions: Who is the real me? Why did I lose myself? Is the original me enough?"

"Who is the real me? Why did I lose myself? Is the original me enough?"

Practically anyone can admit that clothes are one way we construct masks for ourselves. That's not really up for debate — but our intentions are. Is it all artifice? A coping mechanism? Do our personas — and the style that helps present them — elevate our identities, or are we covering them up, denying ourselves some inner truth?

In conversation with PAPER, Suk and de Boer guide us through the character examination that is Smile Now, Cry Later. Read on to learn more about the inspirations behind the show, how the actors wore reflected the mission, and what the crew found in creating it all.

How did the idea for Smile Now, Cry Later originate? What was the initial mission behind it?

During our last presentation in LA, we spent a lot of time in Hollywood, which led to this presentation. We became intrigued by human behavior: How people can fake their emotions or put on a fake smile and eventually start to believe the fake smile themselves. It's about the tricks we play on ourselves when we "act," how our coping mechanism can take over. So it was an investigation in why people find comfort in playing a character to escape and how dangerous it can be when the character eventually takes over the "real" character and emotions. One of the starting points of the concept was [a reading by Maya Angelou [of Paul Laurence Dunbar's We Wear the Mask, which] we watched over and over again.

Can you tell us more about the seven scenes within the play? What was the narrative for each, who were the characters?

The characters of the play consisted out of Echo, Narcissus, The Teacher, The Choir, Ophelia, Icarus and a few unnamed side parts. Each scene was inspired by either real-life experiences or famous Hollywood scenes in which the line between character and actor are blurred. There were some secret Mulholland Drive references, Truman Show, Birdman and much more, which we mixed with classical Greek and Roman plays. The idea behind it is to mix contemporary Hollywood with the ancient principles of acting: drama and comedy (the smile and the cry). For instance, the final scene was heavily inspired by the final scene of the Truman Show.

How did you go about choosing performers and collaborators?

We worked together for the second time with Maavven and director Nina McNeely. Most of the people we worked with on this play are either people Nina works with a lot or we have worked with in the past — people we love and that fascinate us for one reason or another. We're always looking for people that connect to the brand and are creators themselves, so the play/presentation is carried by a group of people that all collaborate and add to the creative process. We want Maison the Faux to feel like a place in which everybody involved feels like a part of the same world.

What role did the costuming play in shaping the personas? Why were houndstooth, leather, and denim used in creating romantic silhouettes?

Almost like an universal language, like the tear and the smile, translated in two ways: the modern and the ancient. Like in the development of the play and the set, we were constantly looking for a classical basis. The materials and silhouettes we used all have that same type of feeling: recognizable but reinterpreted.

From the photos of the performance, it seems as if the actors are shown struggling to perfecting the characterizations of their roles. Can you elaborate on the experiences they portray — and what those portrayals are meant to represent?

Everybody in this world struggles with staying true to themselves. Being original and not compromising who you are is one of the hardest things to do, but at the same time it's one of the most important things in life to explore. The performance was very much based around this struggle. Each role and scene revolved around the questions: Who is the real me? Why did I lose myself? Is the original me enough? To illustrate, we had three performers playing the role of Echo, all of them trying to replace one another and competing over who can be the best version of a character.

"It was an investigation in why people find comfort in playing a character to escape and how dangerous it can be."

How did the audience react to the assistant director's instructions to smile or cry? What purpose does this staged element serve?

We want our performances to be immersive, to really touch an audience and make them feel and contemplate what they are witnessing. The assistant director served many symbolic and structural purposes; the AD tried to control the audience's perception of the play, telling them what to do and how to feel. So not only were the characters struggling to find authenticity in their portrayals, the audience was also manipulated and forced into certain ways of behaving and feeling.

What did you find in exploring questions about the authenticity of emotions and the line between person and persona? What about the question of, "How do you recognize the mask?

During this whole investigation we found out that the "masks" people wear can be just like fashion. It can make someone hideous and fake, or it can serve a purpose of helping to bring out identity and reinforce someone's realness.