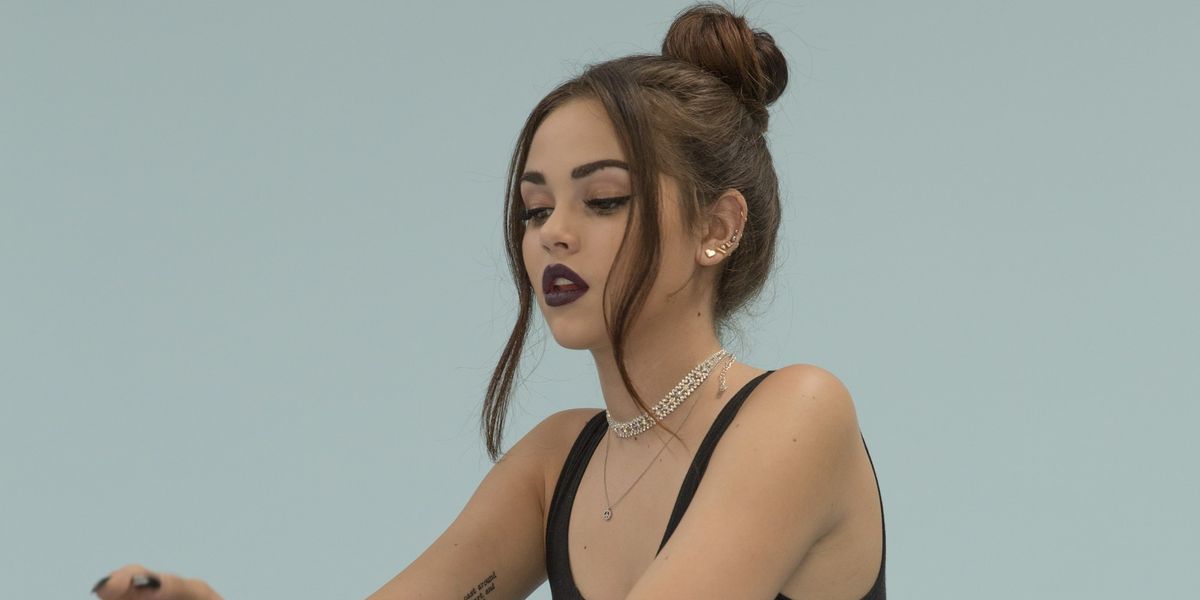 In 2017, it's hardly a new idea that women face pressure to filter themselves—their faces, their bodies, their feelings—online. Perhaps no one knows this better than someone who grew up under the scrutiny of more than a million followers—someone like Maggie Lindemann. Since jumping on social media at age 14, Lindemann rose to fame on Instagram, garnering 1.8 million followers.

The last few years of her life have been filled with change—and a bit of chaos. In summer 2015, her manager discovered Lindemann singing on Instagram and the Dallas native moved to Los Angeles to pursue a music career. Shortly after, a video her ex-boyfriend, Vine star Carter Reynolds, pressuring her for sex leaked online, leaving her at the center of a social media firestorm that referenced sexual assault, depression, and suicide. But by summer 2016, she'd made a fresh start: After releasing three songs independently, she signed to 300 Entertainment this past July—on her 18th birthday—and released the single "Pretty Girl" in September; the track has since amassed more than 6.5 million Spotify streams.

This summer also saw Lindemann post a vulnerable and emotional Periscope broadcast, in which she talks about sexuality and comes out as bisexual. PAPER caught up with Lindemann to talk about "Pretty Girl" (a remix of which is premiering below), coming out on social media, and what she's learned from sharing her life online.

When did you realize you wanted to make music for a living?

I've always loved to sing—in the car when I was little, in church choir, in school choir. I think [I realized when I was] in ninth grade, but I didn't have any of the tools. And I should have been focusing on myself at that time, anyway. But when my manager found me [singing on Instagram in 2015], I was like, "okay, I can actually do this."

The first songs you released—the ballads "Couple of Kids" and "Knocking on Your Heart," and the edgier "Things"—sound quite different than "Pretty Girl." How do you see your music evolving over the near future?

I haven't found that exact sound I want—I'm just trying out a bunch of different things. Hopefully in 2017, we'll really lock [my sound] in. I want to add a little bit more of a grungy, hip-hop sound to my music—to make it a little more like me. Still pop, but a little darker. I feel like with my songs [as they are now], you can move, but it might be a little more awkward. I just want to have that kind of beat where you feel like you can move a little more.

What was the inspiration for writing "Pretty Girl"?

Over the past year, you've started performing live. How has that process gone?

My first performance—with a little crowd at Dash Radio—was scary. I was really nervous. But I think after that, I was kind of like, "Oh, it's not that bad!" And just going to vocal [lessons] and singing in front of my coach would help me a lot. It's also been hard, because sometimes—I don't know why—but my voice goes away all the time. But my confidence has definitely gone up.

My music is definitely more of my emotions and feelings than my social media accounts are. With social media, it's just me saying whatever I want to say. With singing, it's me saying the things I want to say but I don't know how to say.

Last fall, you went on Periscope and addressed your sexuality. How long had you known you weren't straight?

Since I was little. I've always just admired girls, and thought they were super pretty. But I never thought anything of it until about eighth grade. But I felt like I had to hide it. Growing up, my parents always said being gay is fine, but they had a little different view on bisexuality. They felt like you should choose. My mom grew up in the church, and that was what she grew up thinking. I don't blame her at all for that, but I was just really scared. I didn't want people to give my [younger] brother a hard time. I wasn't scared to tell my friends or anything like that—it was mostly my family.

Why did you decide to share that information now?

I felt like I was tired of hiding it, and I just really needed to talk about it. And I saw so many other people [talking openly about their sexuality] that it just really motivated me. I was like, "What am I so scared of?" I think the response [to me] has been really positive, for the most part. Of course there was some negativity, but I didn't really let it bother me.

It was a really raw moment.

Yeah! So the thing is, before I got on, I wasn't crying at all. I wasn't emotional. I was perfectly fine. But when I got on, I just started crying and I just couldn't stop it. A lot of people were like, "Oh, she's so dramatic, she's so extra." But I guess that was just my reaction to the situation. When you're hiding something for so long, it just builds up.

You've had a big year. What have you learned the most?

I've been traveling a lot [doing radio appearances and promoting my music]. I don't really hate traveling as much any more. It's kind of my normal now. I used to hate missing out on anything in LA—missing parties, or missing anything with my friends. I have really bad FOMO, so when I would see people out, it would upset me. But now that I'm traveling and doing things for myself and helping my career, it's really changed my way of viewing things. I would much rather miss a party to go promote my music and help my brand. I think I've grown a little bit.

Lastly, you started sharing your life on social media when you were very young. If you could go back and give yourself a piece of advice, what would it be?

Don't let social media take over your life. Don't let it consume you.