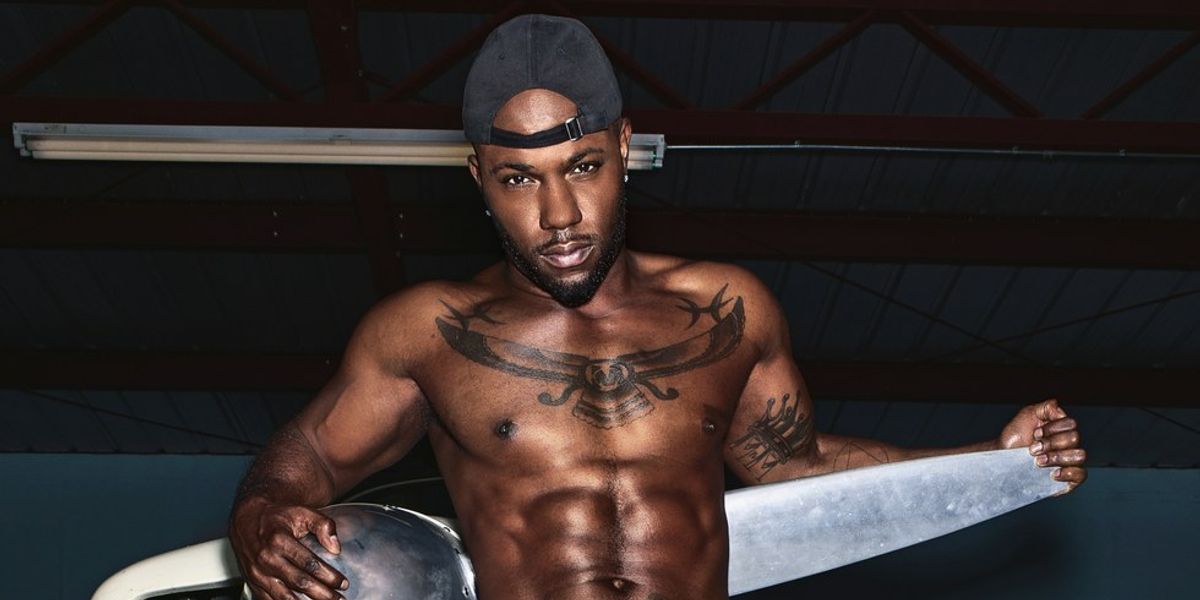 Milan Christopher has never been shy. The rapper came to prominence on VH1's Love & Hip Hop: Hollywood, where he broke ground in the second season as the series's first openly gay reality star, navigating a relationship with then-boyfriend Miles Brock. He continued to pursue his music career, releasing album The Alpha, and has also appeared in videos for Kanye West and the Game. Christopher has also been an active supporter of the LGBTQ community, last year releasing the powerful track "When I Go," which addressed bullying and suicides of queer youth. Now for PAPER, Christopher worked with photographer Matthias Vriens to show a side of himself that fans might not have seen--a very-NSFW one. We talked to Christopher about fighting homophobia, particularly in the hip-hop community, being a role model, and why Snapchat is a better dating app than Grindr.

Well, I just feel like in our culture it's so taboo for a guy to show their bodies but it's ok for a woman to do it. I just kinda want to break that. I think I have a nice body and I think it's art and I just think that it should be celebrated like they celebrate women's bodies. So you know, I could be a guy and be gay and be black and be artistic and be artistic in a nude fashion shoot in the same way that anybody else could.

Yeah, and you mention all the different things that you are, because you tick many boxes -- which, if any of those, communities do you feel like will most embrace the shoot and which will not embrace the shoot?

I think that all communities have like kind of walls that need to be broken down so I'm not really sure. I'm not really sure which one would be like, "Oh, this is awesome," or which ones would be like, "He shouldn't have did that," you know? I think it will be a mixture of both — I think that some people will see the art in it and I think that some people will see something else but that's just human nature.

I think about them separately because they are very separate. But I also feel like all those things encompass who I am. During pride month, I always think about all of the things that the LGBT community lacks and things that I feel like should be changed. And I think about equality, and the stigma and the taboo, and all the things that we work so hard to break through. So I think that this particular shoot, I think this is really important for not just the culture but for the community and pop culture in general. I've never seen it done in you guys' magazine before and I've really never seen it done in a way where it's like woah. It's been years--I think something [there was something like it in] the 70s--I forget the actor, but he did a full frontal and it was really crazy.

I don't even think that he showed dick, but he did this nude thing for Cosmopolitan and it was a huge scandal.

And so I want that. I want that "break the internet" moment. I want people to look at this and be like, "Oh, wow, it's ok." This guy is a musician, he's on TV. He's doing this, he's doing that but it's ok.

Do you think about representing gay African Americans?

I do—I think it's not that many gay guys who are African American who are out and who are comfortable? Right now, I can probably name about 5. And it's millions, you know what I mean? I do think that I have a huge [responsibility for] representation of the community and I do think that I'm doing pretty well. I'm always being honest and being my authentic self, not really holding back and just putting my best face forward and trying to make things happen.

Do you consider yourself a role model?

You know the craziest thing? I was just hosting in Detroit. I posted a picture on Instagram and it was this little eight-year-old boy, caucasian boy from Canada, who begged his mom to drive him to Detroit to meet me and he knew all the words to my songs. I was just like this is the weirdest thing. I never knew that I was influencing that age group or that they were even paying attention. So, I do think, in a sense, yes, I am a role model. But I also think that at the same time…Im nervous. But this takes a very strong person to go face forward and make it happen and make people accept it.

Did you have any role models when you were growing up?

Absolutely. Prince and Michael Jackson. Those are my role models. I don't know what Prince's sexual orientation is but I think that he has the biggest influence on me because he was able to transcend from being a man but also being very effeminate and having both men and women just love him and respect him. I think if I could take part in our culture, that's the part I want to take, that place. You know, where Prince left off. And of course Michael Jackson is one of the best entertainers ever. And he used his music to send out very powerful messages.

You're a part of the hip hop community, which often gets a reputation for being very homophobic and very unwelcoming.

Oh yeah. Even with the producers and the directors and just everything. I mean, I was on Love and Hip Hop, I had my own Out in Hip Hop television show, I was on the cover of the New York Times, the cover of LA Times twice, on Wendy Williams, Ellen, you know, everywhere. And you know the Hip Hop Awards, the BET awards didn't even invite me to do anything. It's like, this is the first time this has ever happened in the history of hip hop music and you didn't make a place for me because I'm gay? I felt very disrespected by that.

Tell me, how did it come about that you got on Love and Hip Hop?

Well, I had been making music for about two years and I have this song called "Is You Mad or Nah?" People all around the country started saying "Is you mad or nah?" It's a black thing. And they didn't know where it was coming from but it came from me and my best friend Lola [Monroe]. And I think they got wind of it. I was going on the show to be a friend of a cast member that was already there and when I got there, they were like, "Oh my god, who is this guy?" and they were very interested in my story. Then they found out I was gay and they were like, what? They really expounded on that. They wanted to bring that to the forefront because it's something that's been lingering, everybody knows it goes on in the hip hop community but no one has ever talked about it or gave it a story line. They were like that's great, we need this.

How did people respond when it first came out?

Uhmm, I had…we had a lot of bible thumpers, but I think we [also] had a gargantuan positive response. Because people were so happy to finally see it. You know, me and my ex didn't really work out and certain things about that particular situation I didn't want to be a part of anymore. I didn't want my story to be kind of like the stereotypical mess. I wanted it to do what it did, which was really great and if we could've made something even better or greater, I would've loved to do that. But the people really responded well. I think when I first started, I probably had like 30,000 followers in September. In four months, half a million. It was really great. I had a really good positive response.

How are you going to celebrate pride?

Are you single now or no?

How do you meet guys?

Umm, at the gym--there was a time that I used to have Grindr, I don't have it anymore.

What kind of response did you get? Did people think that you were like not really you?

MC: Oh, well, this was before that, before the lights, camera and action. I used to use Grindr. Right now, I kinda use the gym, Instagram, Snapchat.

So if a cute guy sends you a direct message you'd respond?

Yeah, we'll talk and then maybe hook up or meet up or whatever. So yeah, I think Instagram and Snapchat are my number one apps.

Is there a difference between the guys you find on those different apps?

On Snapchat, the guys are a little bit--because the videos disappear, they're really forward with their pictures on Snapchat. On Instagram, it's kind of more casual. Yeah, like what're you doing, let's hook up, let's go to the studio, let's hang out, let's do a shoot, blah blah blah, that kind of stuff. Snapchat they get right to it.

So tell me about this a new CD you have coming.

I have a new album coming out. It's called Culture Vultures. It's about how the community and the culture kind of steals everything from the gay culture, the way we talk, the way we dress and then they make it okay for them and then they still try and demonize gays. If you look at all the rappers right now they dress the way gays have been dressing for years but still have a problem with gays. And are wearing gay designers. It's weird.

When will that be available?

That'll be available in July. I just released my first single off of it called "Revenge."

Is there someone you want to get revenge on?

When did you come out? Tell me a little bit about that.

The first person I came out to was my little brother, Chris, and he basically asked me why I don't play football and all this other stuff.

How old were you at the time?

And how did they take it?

My mom didn't take it too well. My dad, he was kinda…I think my dad knew. My mom knew too.

By this point had you had boyfriends?

I hadn't had any boyfriends yet. I didn't have a boyfriend until I was like 18. My last year of high school.

That's pretty advanced though, having a gay boyfriend in high school.

What's your dream date? With whom and what would you do?

My dream date…Would be with Odell Beckham. He's so fine. And we probably would just chill out at a pool, at a really nice house in the hills. And just eat and chill and talk by the pool.