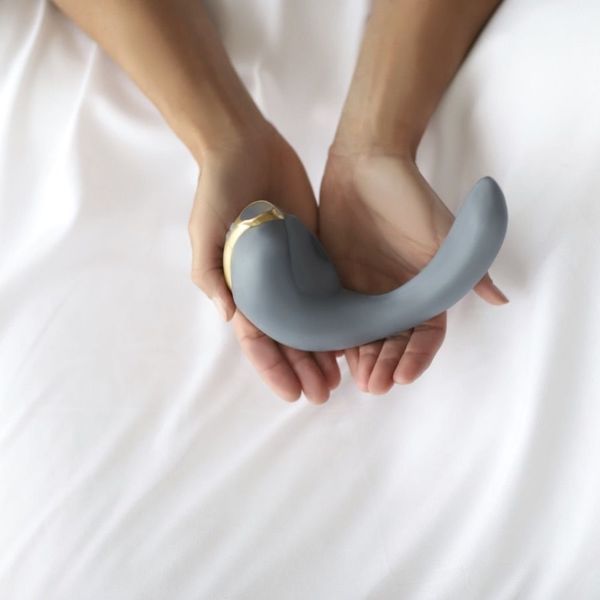 It's no secret that the tech industry still has a long way to go in terms of gender equity, and the recent decision to ban a women-led start-up and their sex toy from the world's largest consumer tech show is just further proof that we have a very long way to go.

Earlier this year, an Oregon-based sex toy company called Lora DiCarlo submitted their Osé Robotic Massager for consideration in the Robotics and Drones category at this year's Consumer Electronic Show (CES) Innovation Awards. Utilizing top-of-the-line micro-robotic tech, the team managed to create a (hands-free!) product that "mimics all of the sensations of a human mouth, tongue, and fingers," per the company's website. The result? A "blended orgasm" that combines a clitoral and G-spot orgasm sans vibration, which they describe as "the holy grail of orgasms." Not only that, but given the sophistication of their tech, an independent panel of expert judges — in addition to CES' organizer, the Consumer Technology Association (CTA) — decided to designate the product as an honoree.

"It really legitimized the conversation we're trying to have," Lora DiCarlo founder and CEO Lora Haddock said. "It was a product created by and for women," she added. "You see a lot of product explicit for men in this area, but there isn't enough coverage or acceptance around women-geared products. We thought that conversation was changing."

However, a month later, the company was informed by the that Osé (suddenly) didn't fit into any existing product categories and, therefore, shouldn't have been accepted into the Innovation Awards Program in the first place. Additionally, the CTA cited a rule that said they had the discretion to disqualify entries deemed to "be immoral, obscene, indecent, profane or not in keeping with CTA's image." As a result, Lora DiCarlo was informed that their award was revoked and that they would not even be allowed to exhibit at CES.

"How in the world is women's sexual health 'obscene' or 'immoral'?" Haddock asked, before Technical Director Lola Vars added, "We're not applying to a morality conference either. We're applying to tech conference and our tech is very good, but now we're not even allowed to be at the event."

Not only that, but as the team points out that the other products in the category they were in included two robot vacuum cleaners, three childrens' robots, and one robotic personal shopper — i.e. every tool a woman needs to service others, whether it be cleaning the house, looking after the kids, or buying groceries. So then, why exclude the one product that's literally only for a woman herself?

If anything though, the team laments the missed opportunities for collaboration and networking that CES would've provided. After all, as Haddock pointed out, their technology — which currently holds eight different patents and can be applied in near infinite ways — isn't exclusive to sex toys.

"When you dismiss a product like this — that has so much innovation and [potential application] — just because you're refusing to accept that sexual health is worthy of innovation, you're essentially cutting off your nose to spite your face," Brown said. "You don't deserve innovation in the end." And she has a point.