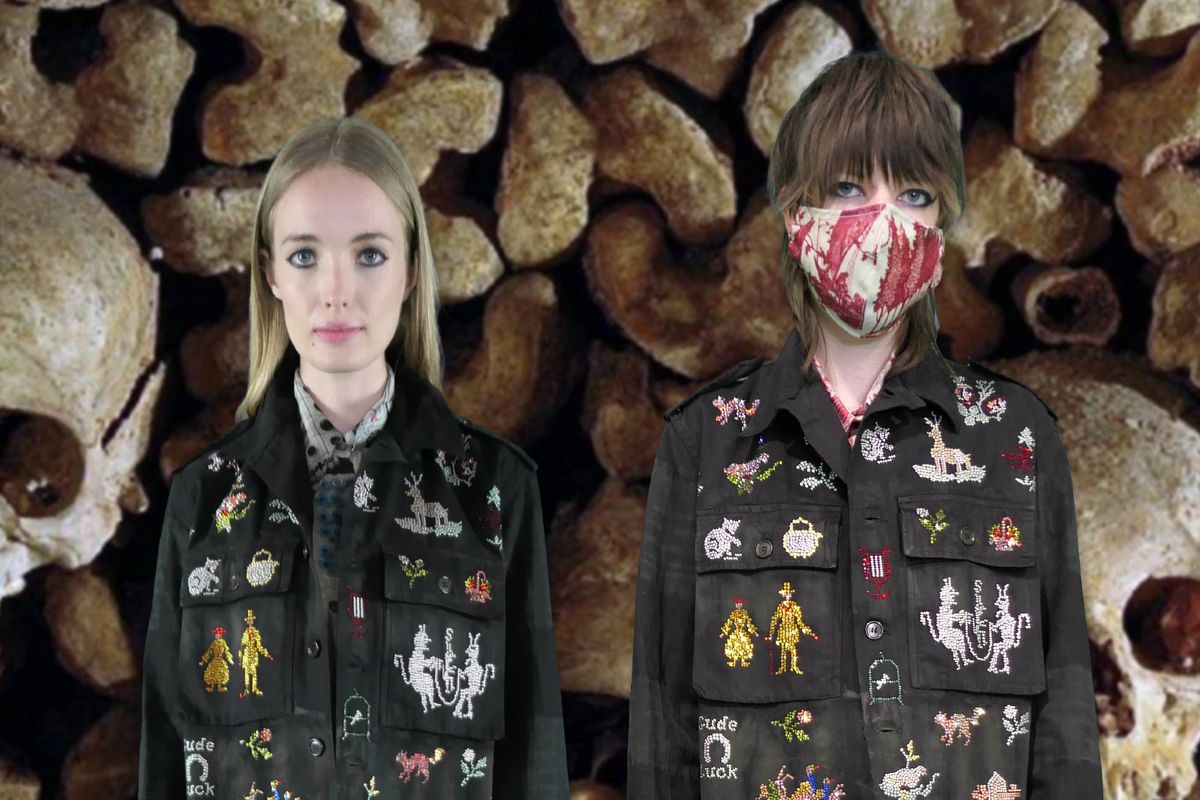 Libertine Kicked Off 20 Years With a Ghostly NYFW Film

Every Fashion Week, Libertine throws a maximalist runway show complete with psychedelic prints and wild colorways. But this season, with the pandemic forcing most designers to experiment digitally, Johnson Hartig opted instead to present a short film. With his brand's 20th anniversary looming, the designer teamed up with Director Xiaohan Zhao to showcase a spooky collection dubbed "Ghosts From Our Past."

In honor of the milestone, Hartig formed the collection around his design beginnings and Libertine's 2001 founding. This included elements of the Los Angeles-based brand's earlier collections, such as Hartig's signature Toiles de Nantes collaged fabric, and the skull-and-crossbones and whale motifs from his 2007 Target collaboration.

"I sat with this 1950s Singer sewing machine that originally belonged to my mother and what I used to produce all of the brand's early designs, and really thought about what the last 20 years have meant," Hartig tells PAPER. "It felt more fresh to go back to Libertine's roots."

Indeed, Libertine's new collection colors are darker, and skeletons run rampant in the film, from their placement in prints to a bone chandelier backdrop. The pieces are also composed of more casual separates, which can easily be worn at home.

"I'm not feeling light and bright during the worst pandemic in a hundred years," Hartig admits. "It's not a light and bright time — it's dark fucking days. If it wasn't hard enough to run a small fashion business, these conditions will test your will."

Despite said conditions, Libertine's film is proof of the power of adaptation. It's a mixture of the brand's signature dramatic silhouettes with edgier elements, where masked models in button-embellished suits and Toiles de Nantes-printed dresses pose in front of a painted landscape. The sky darkens, a haunting laugh track plays and the frame fills with the cast lounging on clouds — clad in Toiles garments, patchwork sets and scissor-printed suits—all surrounded by dancing skeletons. Some stare directly at the camera with blood-red eyes for chilling, unsettling effect.

The collection upholds the whimsical aesthetic and nostalgia of Libertine's first creations, while incorporating darker undertones associated with the pandemic. Hertig's brand is one of the few — alongside Anna Sui, Rebecca Minkoff and Monse — that included masks in its Fashion Week presentation, a firm reminder that COVID-19 hasn't vanished yet.

"This collection was designed during the worst pandemic in a hundred years," he says of the line's gothic aesthetic. "A million people have died from this phantom disease that appeared within the last year. Ghosts and spirits are all around — physically and metaphorically."

See the full film, titled "Ghost From Our Past," below.