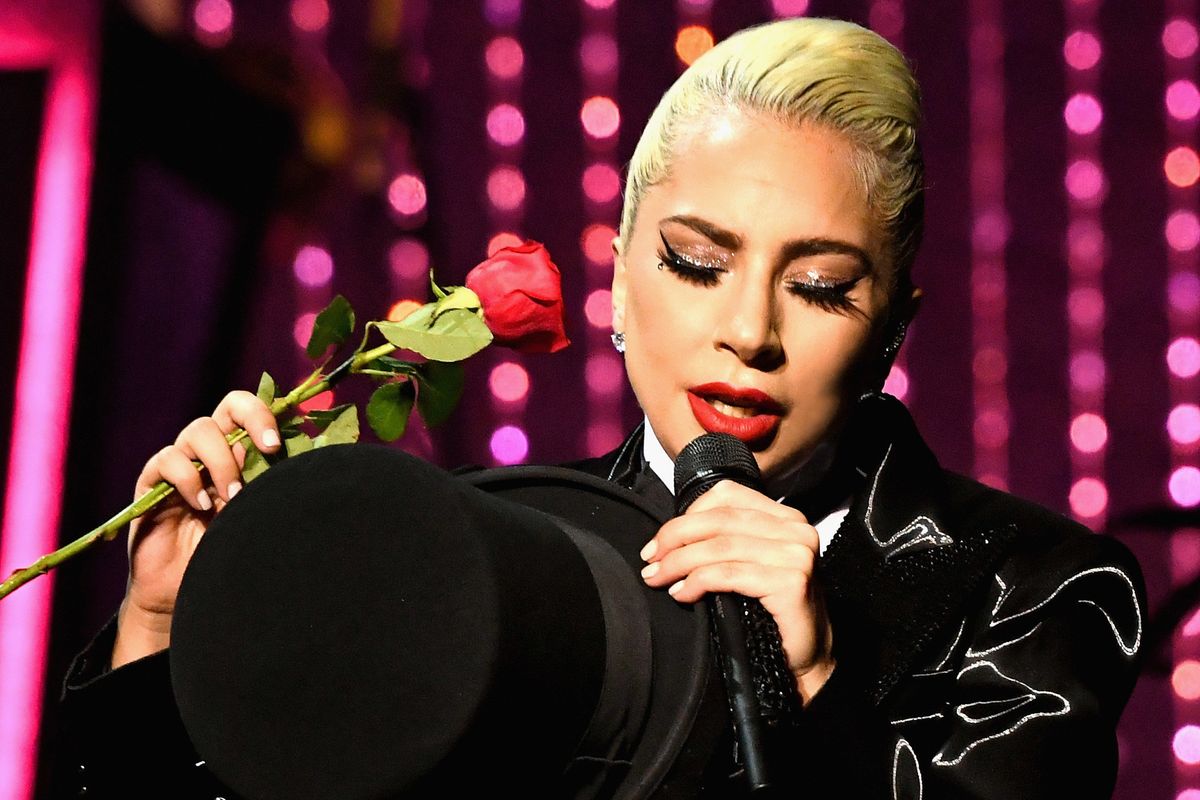 Settling into the Park Theater inside Las Vegas' Park MGM Hotel for Lady Gaga's just-launched Jazz & Piano show, you're transported instantly to a time when jazz was the pop music heard everywhere.

Classics pulled from the Great American Songbook by legendary singers ranging from favorite Gaga collaborator Tony Bennett to Dinah Washington, who Gaga later said she fell in love with at a young age, echoed throughout the theater, as if from the heavens. The stage, complete with old-school booths for the show's world-class 30-piece band, was illuminated by softly glowing, mood-setting neon colors, and (yes, of course) a curtain and backdrop comprised of numerous glistening, dangling crystals. Because Vegas, baby!

The event, which is part of Gaga's multiyear Vegas residency programming that also includes her high-concept pop show, Enigma, was outfitted to resemble a jazz hall of yesteryear, but done in only the fabulously over-the-top way that a show by Gaga can. And for such a production within the Park Theater, which completed renovations only a few years ago, its up-to-6,300-seat space somehow felt inviting and intimate. The openness of the space suggested that there wasn't a bad seat in the house.

So needless to say when Gaga and her band took their places and the lights came up for the apropos first number, a cover of Frank Sinatra's "Luck Be a Lady," it felt like, here we are. Hearing Gaga's voice, full of brightness, nuance, and emotion, and seeing her swish around in a sexy sequined, deep-V, leg-baring dress by her sister Natali Germanotta, brought up instant feelings of nostalgia that continued throughout the show. Gaga singing jazz felt so familiar and familial — something Gaga talked about on stage, and in simple, black-and-white clips by the show's visuals director, Eli Russell Linnetz. In one of the transitional videos, Gaga says that singing jazz, for her, is like "receiving a warm hug." Singing Dinah Washington's "Coquette," a song Gaga first heard as a young girl and was encouraged to sing by musical directors (at the boys' school, because she's always been a rebel), inspired my own memories of Gaga's influence. That warm hug thing is true no matter what genre Gaga sings.

Whether you admire or despise Gaga — seeing this show makes even the biggest cynic respect the hell out of Gaga, the Performer — it is impossible to deny the effect her music and performances have had on millions for over a decade now. Even I, a fan with fair respect for Gaga, remember whole eras of my personal development completely inspired by Gaga's own evolution, from The Fame to now. In the very beginning of her career, I was moved by her commitment to artifice as pop performance, because for her, behind the artifice was an intensely personal struggle. When she put Bowie-esque lightning bolts on her face and sang about being fabulous but broke, I thought if I donned such makeup with no budget, I too, might feel a touch more special. But I, like many more casual and rabid fans alike, was hooked by her ability to peel back the surface of massive pop hits like "Bad Romance," "Born This Way," and "Paparazzi" to reveal the layers of lyrical and personal depth, when she performed acoustic versions at the piano.

Also, Gaga would end sets of Songbook classics with acoustic jazz versions of her biggest hits, often accompanied by her band, which kicked into full, suspenseful swing at each song's climactic points. Then, too, these familiar moments were informed by aptly red-carpet ready costume changes, including a Schiaparelli opera coat and velvet bow mini-dress, a crystal-embroidered see-through dress by Ralph Lauren with a white feathered boa as arm candy, and a shiny tux with attached bustle, also by Lauren. Not only because Vegas glamour, but because what the hell else would Gaga wear to her own jazz revue?

Throughout the show, Gaga showed great reverence for classic songwriters like George and Ira Gershwin, in a tearjerking, extremely passionate version of "Someone to Watch Over Me" and Billy Strayhorn, who wrote the complex "Lush Life" between 1933 and 1938. That one appears on Gaga and Bennett's Cheek to Cheek jazz duets album. She sang lines in "Lush Life," such as "12 o'clocktails" with a control that belied the song's deep sadness and suspense. During interludes between songs, Gaga smartly mixed her New York-bred pop star persona with the offbeat humor of a jazz chanteuse who loves a dry martini and dirty conversation: highlights include her cheekily dropping F-bombs, slipping a temporarily "stolen" wedding ring from an onstage guest into her panties, and, during the "Lush Life" performance, a tuxed Gaga drinking a double whiskey — neat, of course.

There were a few moody surprises to shake things up, including stirring renditions of Cher's "Bang Bang (My Baby Shot Me Down)" and the always-lively "New York, New York," which closed the show and brought down the house with the show's many standing ovations. It's no wonder, then, that Gaga said that, upon being announced, her jazz show sold out well before Enigma did; the audience present also felt Gaga's embrace.

Many of the show's best moments paid homage to the greats, but also illuminated Gaga's own studious ambition, who acknowledged jazz tradition, but is determined to be part of a new wave of voices who are making jazz feel new for this generation. ("I'm blessed to be here, to sing these songs," she said). Gaga spoke onstage and in those Linnetz clips about jazz songs that were a century old and still relevant through the art of reinterpretation — an allowance made by jazz's loose musical form. Also, consider how true and rare it is for a modern song to last more than 15 minutes of notoriety might allow, let alone 100 years. Gaga rightly noted that jazz was popularized by Black artists, citing Black women singers as her earliest influences, from the aforementioned Washington, Ella Fitzgerald, Billie Holliday on. And you needn't read a textbook to know that Black jazz inspires the evolution of hip-hop. Consider the influences of modern musicians including Kendrick Lamar, Frank Ocean, SZA, and many more. Even other white artists like Lana Del Rey write nuanced hip-hop-inflected songs that feel forever indebted to jazz innovators like Holliday. Beneath her smoky vocals and robust string sections is a spirit of improvisation.

This freedom is precisely what Gaga is after in Jazz & Piano, for you, for me, for herself. Perhaps her favorite thing about jazz is the way it demands one learn it as written. Indeed. Jazz songs are traditionally written through on sheet music. And, as she says, once you get it down, you can do whatever you want with it. Because again, jazz remains relevant today with each new interpretation, transforming classics into something more personal, political, and current. Whether Gaga realizes it or not, when you consider her tremendous success, she's already part of a great tradition of pop songwriting that will certainly be recognized in years to come. In looking back at the roots of jazz, she's always moving forward. With all this in mind, if you listen closely to Gaga's live shows and recordings, you'll feel similar comfort, momentum, and, most important: freedom.