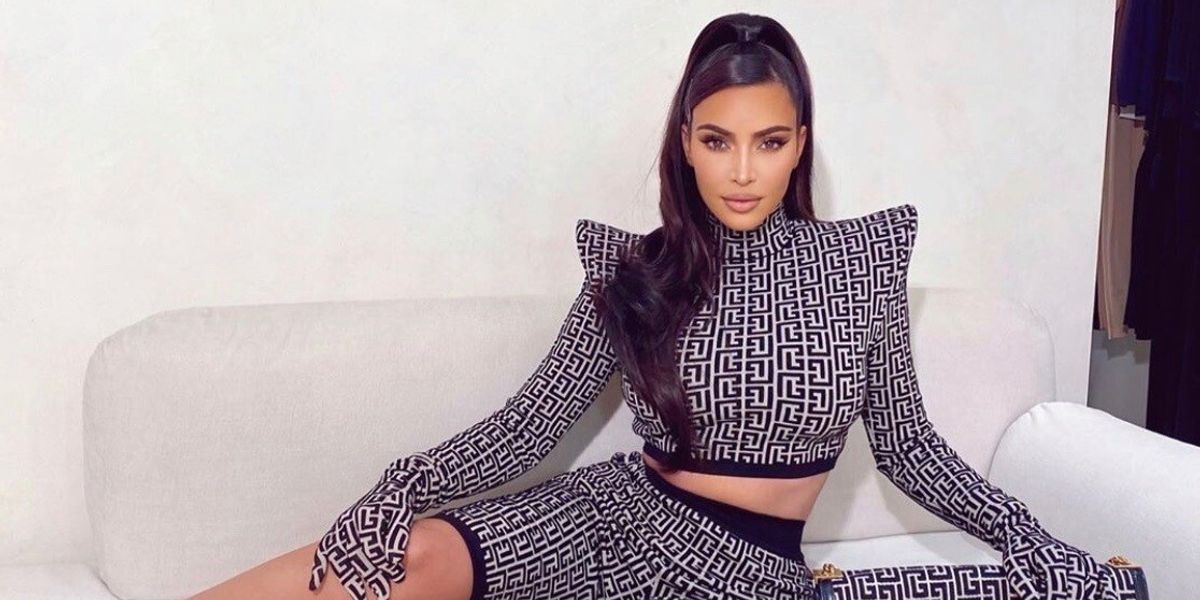 A de facto muse to Olivier Rousteing, the social savvy creative director of Balmain, Kim Kardashian-West has long served as a walking billboard for the French brand's ready-to-wear collections, oftentimes sporting their wares the same week they debut on the runway. (Remember that wild latex moment with sister Kourtney?)

This past week, the reality mogul continued that same energy with a series of photos of herself clad in a Balmain top and biker shorts with a matching clutch printed with a distinct maze-like pattern. The bag is part of the brand's new 1945 collection (named after the year of Balmain first opened) that's available now and was also carried by models at its Spring 2021 show yesterday in Paris.

Taken from a monogram first introduced by founder Pierre Balmain in the '70s, the print was inspired by the winding labyrinths of France's Renaissance gardens. For this new range, Rousteing sought to bring that sense of appreciation and history back for a new generation that's perhaps not as familiar with some of the brand's early roots.

"Those who know me already know that understanding origins is something that is deeply personal for me," Rousteing told PAPER. "Only by knowing and celebrating where we come from can we clearly see where we are headed. I believe it sums up the how and the why behind almost every Balmain creation today."

He recently put together a mini photoshoot on the streets of Paris inspired by a 1971 archival image of a model standing outside a Pierre Balmain boutique wearing the aforementioned labyrinth pattern complete with monogram luggage and accessories. The photos he shared on Instagram capture the same nostalgic mood but with a futuristic spin (those trunks are truly something to behold).

And while Kim's endorsement should come as no surprise to Rousteing's 6+ million Instagram followers, her platform is surely giving Balmain fans a new lens into the decades-long history of one of France's earliest luxury houses.

1971 my inspiration of a timeless and clear vision of the man Mr Pierre Balmain that defined his vision of Fashion 🖤 I have always been OBSESSED by the archives and by what is timeless. Time to share with you my secret garden.

"Pierre Balmain had his muses and I have mine," he wrote. "His muses from Brigitte Bardot to Josephine Baker shown to him love, support and friendship. Today Kim is one of My muses and will be part and is part nowadays of the history like the icons I mentioned before and will be part of fashion history."

The 1945 collection consists of four styles rendered in Balmain's labyrinth print—including Kim's jacquard porchette bag—as well as some leather shoulder bags in graphic ivory and black tones. It's available to order now on Balmain.com and in select Balmain stores.