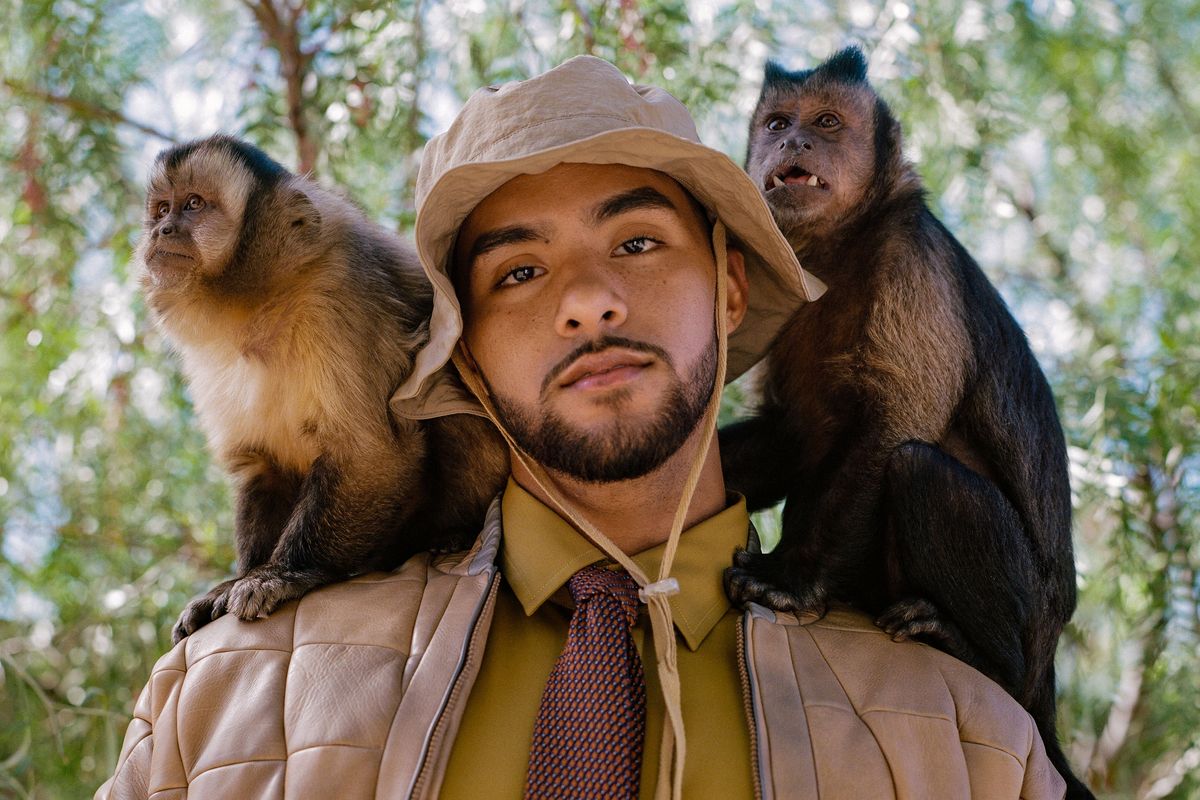 Brother Nature — AKA Kelvin Peña — is like most of us: an animal lover. Unlike most of us, he's amassed over 5 million followers across Instagram and Twitter and regularly enjoys the company of animals most people only ever see online, like kangaroos, chimps, rhinos, zebras and more.

Based mostly between NYC and LA (but if you look through his Instagram, you'll find he's often traveling all over the world), Peña, 21, says his social media popularity "kind of just fell into my lap in 2016 when I befriended a family of deer in my neighborhood in Pennsylvania. The Internet seemed to take a liking to it and it just went viral overnight."

Despite what @Kelv's 2.7 million followers on Instagram see, Kelvin dismisses the idea that he's "the chosen one," so to speak, or an animal whisperer. "To be honest, I don't feel like I have a special connection with animals," he says. "I feel like I'm just chilling and vibing and I treat them equally, just like I would treat anyone else. I don't force anything." When asked how he gets animals to trust him, he answers that he doesn't get an animal to do anything, saying, "If an animal wants to interact with me, I think that's awesome. I never force it."

His "never force it" approach has shown great results. Along with those deer, he's been seen smiling with hippos, painting with baboons and snuggling with sloths. Whether visiting the world's zoos and nature reserves or just walking through Central Park, Kelvin finds wildlife to kick it with everywhere he goes. Is there any animal that he can't charm? Yes, actually. "Snakes" he says, immediately. "I just always seem to get bitten by snakes." Well, they are snakes. Even still, he's always down to meet a snake, saying, "I jump at opportunities like that all the time."

With a career involving lions, tigers and bears, he says there's really only one species that made him "pretty anxious:" sharks. "I didn't feel unsafe at all, but definitely a little spooked out when I swam with sharks," he says. But, of course, he managed to get the shot.

"Try to be happy, because life is cold but you have to thug it out and go hard for what you want."

The video of him swimming with sharks off the coast of Hawaii has 4.7 million views on Twitter and more than 170,000 likes on Instagram. A master of both platforms, Peña says his growth is even surprising to him. "I had like 1,500 followers [on Twitter], then in about three days I had 150,000," he recalls of what happened after he posted that photo with the family of deer.

Since the days of Steve Irwin, there hasn't been such a charismatic animal lover promoting positivity and respect for the environment, and it's clear many of us were hungry for the Gen Z Kelvin to pick up where the late Irwin left off. Kelvin gets the Steve comparison a lot, obviously, but it doesn't bother him to be compared to one of his heroes. "I really respect Steve's work and all that he and his family have done to keep conservation alive. I never thought this would be my life, though, being surrounded by animals and trying to help them." What resonates with his followers is that he is them. "I was just a kid going to college like everybody else, and then I started to blow up with this stuff." Being Brother Nature is a full-time job, and Kelvin is just the right man to do it.

All clothing and accessories: Prada

All clothing and accessories: Prada

Often overshadowed by the spectacle of hanging out with Money (the most famous of Kelvin's animal friends and the deer that started it all) are Brother Nature's conservation efforts. He recently decided to go vegan. It's going really well. "Honestly, I feel a lot more energized. I ran five miles at a six-minute pace and I've never done that before in my life," he says. "I'm taking that as a good sign. I'm just trying to live up to my name."

He's also stopped using single-use plastics or taking long showers, and he urges all of his followers to do the same, for the fate of the world. There are things more valuable, things that once we lose we won't ever get back: the planet, ecosystems, time. "Yeah, and time is running out," Kelvin adds. "I have a baby sister that's 3 and a little brother who was just born, and we have to take care of this planet and make it a sustainable place for them. We just don't know what the future holds." He goes on, "We're seeing it every day."

And since a lot of his supporters are around his own age, he has the unique position of being able to talk to people, not up or down to anyone. So, what else would he say to the millions of eyes and ears following, liking and retweeting him? "Do everything with purpose. Give the things that you care about your all and dedicate 100% of your effort toward working hard for your dreams. The universe will pay you back," he answers. "Try to be happy, because life is cold but you have to thug it out and go hard for what you want."