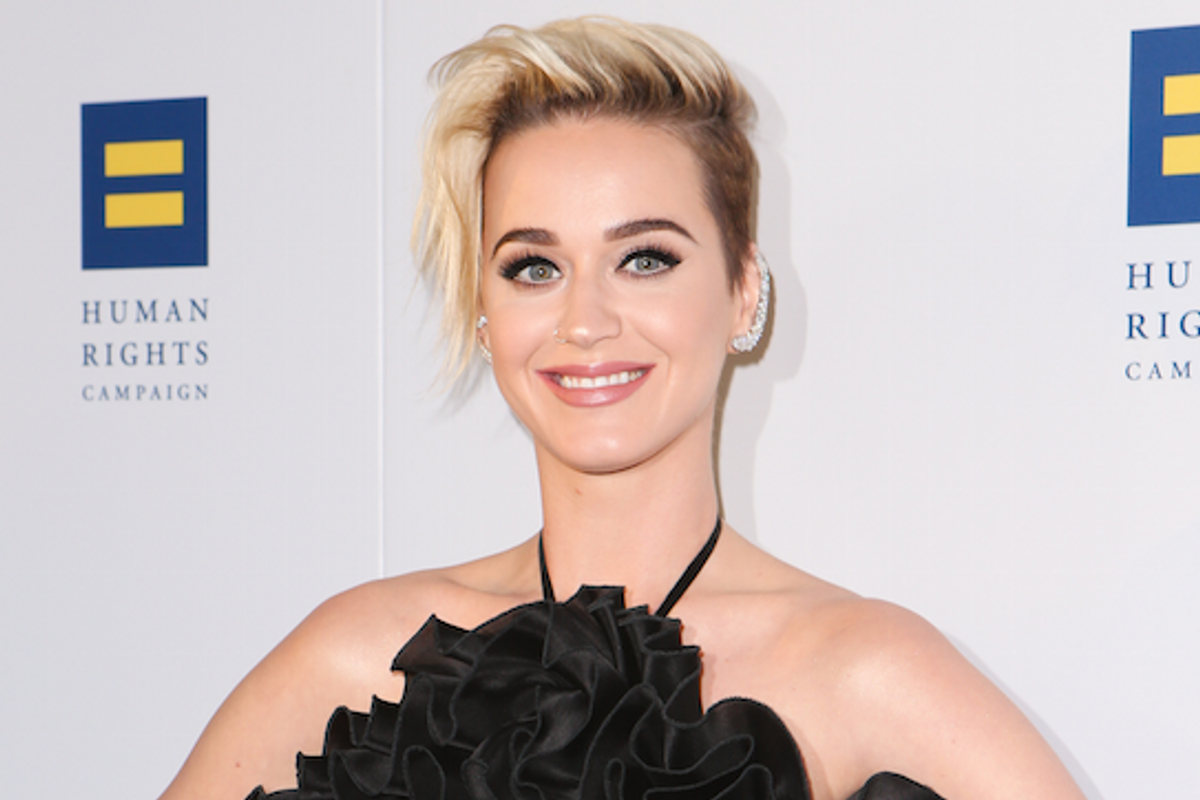 The Evolution of Katy Perry--And America

Katy Perry is now 100% certified woke. The "Ur So Gay"/"I Kissed a Girl" accepted the National Equality Award from the Human Rights Campaign at their annual gala Saturday night and delivered a moving speech advocating for the LGBTQ community. "I stand here as real evidence for all, that no matter where you came from, it is about where you are going — that real change, real evolution, and that real perception shift can happen, if we open our minds and soften our hearts," she told the crowd.

It goes without saying that these songs wouldn't fly today and, throughout her career, Katy has certainly missed the mark multiple times when it comes to social issues. She flip-flopped in a big way on feminism, claiming first in a 2012 Billboard interview, after being named by the magazine the Woman of the Year, that she was "not a feminist," then doing a 155-degree turn and telling an Australian talk show host in 2014 that she is, after realizing the word means she loves herself "as a female and I also love men."

To criticize Katy for any of this, however, feels wrong. We grew up with Katy, as she did with us. Sure, now, we've become highly sensitive to how language--particularly casual slurs--can wound, but we weren't always this way. Those early singles, as Perry noted in the speech, were missteps. It took Perry two years to realize she had misspoken about feminism, but she definitely came to.

For those who wonder if Perry looks back at her early work and cringes, she doesn't. While many today might think "I Kissed a Girl" alluded to faux-lesbianism to attract male attention, Perry specified during her speech that she thinks the track resonated with audiences because of it accurately depicted the struggle that comes with sexual fluidity.

"Honestly, I haven't always gotten it right, but in 2008 when that song came out I knew that I started a conversation and a lot of the world seemed curious enough to sing along, too."

To some degree, Katy is right. Cynics will say this turnaround was an attempt to remain relevant by publicly prescribing to wokeness. Although Perry wasn't necessarily standing for anything specific, like gender equality or LGBTQ rights in her early career, she was still releasing hit after self-empowerment hit. Even as a literal sugary pop-princess spray-tanned and lying wig-adorned and nude in a cotton-candy cloud, Perry put out self-love single 'Firework'. 'Roar' may have become the sonic representation of your recently-single best friend who swears off dating and keeps reminding you she's "a catch," but mostly it was a song supporting strong women. She has grown into her activism and

In terms of commercial viability, Katy the pop star with something to say is indeed a catch. But when her bread and butter was singing about California and Friday Nights, that was not something that anyone might have predicted. "Roar" peaked at number 1 on the Billboard Hot 100 and its success indicating the evolving needs of Perry's fanbase. Now, it seems, Katy is all in. With songs like "Rise" and "Chained to the Rhythm," she is now operating in a space where she's able to embrace fully the "woke" anthem, which has become a new genre of pop in it's own right.

Now a global superstar, the Katy Perry brand is so ubiquitous no label rep should worry about offending the ultra-conservative fans she probably didn't need to worry over to begin with. In 2016, Perry campaigned for Hillary Clinton like no other – even dressing as the presidential candidate for Halloween. The singer was never meant to be a pretty cog serving the music machine – she's better than that. She's not afraid to be political. She doesn't have to keep it light and she knows it.

At the same time, we know who Katy is. She's the fun-time gal who wears millennial pink and is definitely partial to sharing the odd inspirational quote on Instagram. Unfortunately, that means Katy Perry might get it wrong, perhaps even in a way that's highly problematic. Nevertheless, in spite of her occasional lack of nuance, before anybody saw the financial potential in empowerment, pre-trend, Katy was there telling us to love ourselves despite all odds. That's getting it right.