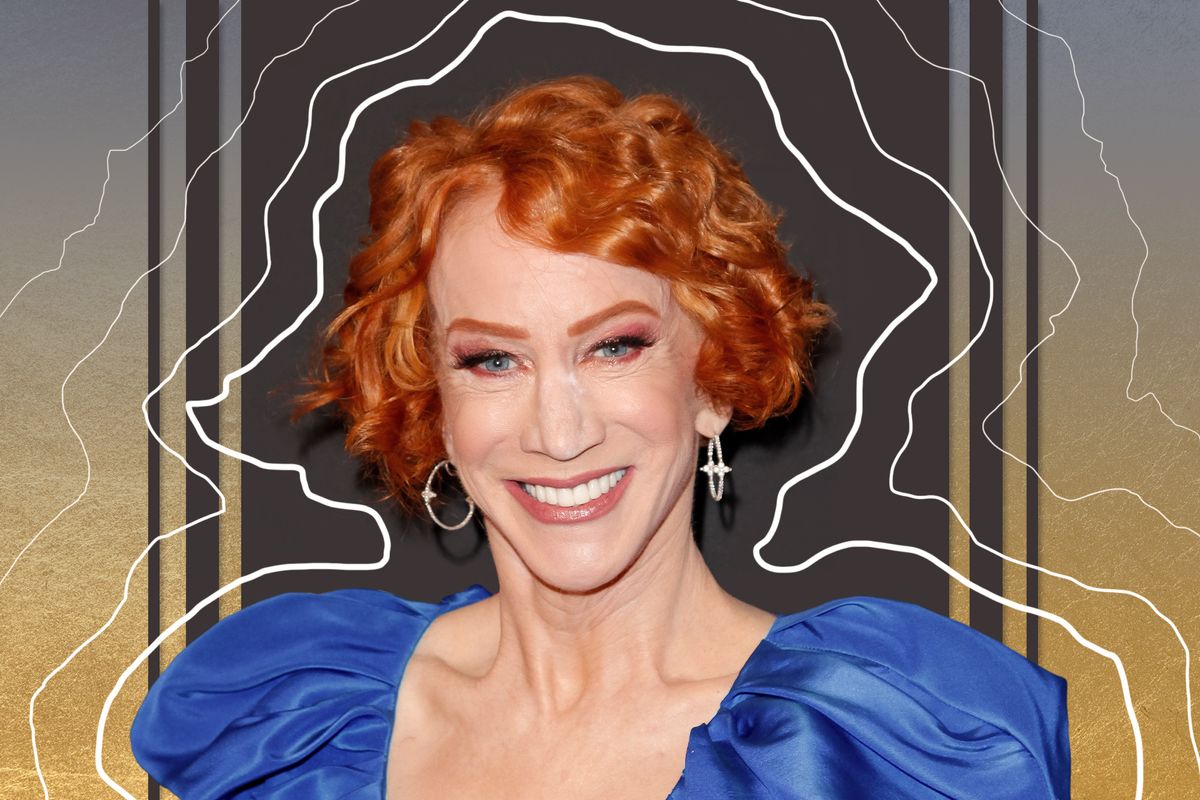 The Resilience and Resistance of Kathy Griffin

She had me at "allegedly."

For weeks I would go around starting and punctuating my sentences with "allegedly" to anyone I came across. I didn't even fully know what it meant, just that whenever the redheaded woman I watched on TV said it — the legality of her act depended on it — I laughed. Her intonation and delivery all seemed calculated, despite the fact that her set isn't memorized, but a stream of consciousness that is fueled by spontaneity and a wit so sharp you could slice a bagel with it.

I fell in love with Kathy Griffin at nine years old. Her hit reality TV series, My Life on the D-List, transcended the reality genre. As much as it was real, it was scripted — but not in a traditional sense.

Related | Megan Stalter: Faking It 'Til She Makes It

"Alyson Hannigan (How I Met Your Mother) once told me, 'I know what you're doing. It's very smart, — taking a reality show and making it a Kathy sitcom,'" Griffin tells me over the phone. "And it wasn't just about showing me and the gays and my hilarious parents, it had a little social edge to it. I've always tried to combine humor with commentary."

Griffin, now 59 ("and proud of it, damn it!"), has amassed more than $75 million over the course of her decades-long career, earned two Emmys and made history as the third-ever woman to win a Grammy for Best Comedy Album. She's the author of two New York Times bestsellers and her 23 televised specials have earned her a spot in the Guinness World Book of Records as the comedian — dead or alive — with the most televised stand-up specials. A career this illustrious and well-rounded was single-handedly engineered by Griffin's ability to carve a space for herself in an industry that didn't always necessarily have a space ready for her to occupy. This time it's no different.

Of course, said time refers to The Photo, where our conversation naturally pivots. No context needed; you know the one. Almost every media outlet has chronicled the story: a sitting United States president used the full power of the Oval Office, the Secret Service and the assistant to the US Attorney's Office to take down a private US citizen for a photo that was — whether you like it or not — 100% legal and protected under the First Amendment. What resulted was a two-month-long federal investigation — that your tax dollars paid for — seeking to charge Griffin with conspiracy to assassinate the president of the United States: a life-long sentence if found guilty.

"I'm sorry to announce that I'm still very much blacklisted. I've literally had three days of paid work in the past year."

In the end, charges were never pressed, but that hasn't made life for the comedian any less difficult.

"I'm sorry to announce that I'm still very much blacklisted," Griffin says. "I've literally had three days of paid work in the past year." The $4.4 million dollars she's grossed on her global tour, aptly titled "Laugh Your Head Off," all while getting detained at every airport along the way as a result of being put on the Interpol list, went towards legal fees and insurance premiums. "That'll make the right wing very happy to hear. Don't forget: I'm the OG darling of the far right."

She's cataloged all of it: the good, the bad, the ugly and everything in between, in her award-winning (and self-funded!) feature film, A Hell of a Story, now available to stream in 62 countries. The picture nabbed the esteemed Freedom of Speech award from the Traverse City Film Festival, which was founded by Academy Award-winning filmmaker Michael Moore in 2005.

"I'm very proud of [A Hell of a Story]. I went to a bunch of festivals, won awards and did a lot of fun Q&As. I would love to go back on tour when it's safe. Frankly, I don't know if it's safe for me to go back on tour, but I think the time will come."

But her feature film — or docu-comedy, as she calls it — is more than just a stand-up special. It is triumphant in its vulnerability, opening with footage that is raw and emotional, the toll of being detained in city after city finally getting to Griffin as she breaks down on the plane to her next tour stop. Her assistant quit mid-tour, leaving Kathy's husband slash tour manager, Randy, and Kathy herself, at the helm.

"Frankly, I don't know if it's safe for me to go back on tour"

But that didn't stop thousands of people all over the world from flocking to hear the story from the person who tells stories best.

"There's a reason that I sold out Carnegie Hall in 12 hours and then played Radio City the next night — which no comic in history has ever done — just to prove that, even though I'm on the actual president's open enemies list, there are audiences all over the world that want to hear the 59-year-old redhead tell it like it fucking is because I've lived it — I'm still living it." It's her watermark, as she calls it, much like every milestone is in her career, from her televised specials to her awards.

"I call them [my watermarks] because I want people, especially young people of color and LGBTQ+ folks, to see that to be one of only three women in the history of the Grammys to win for Best Comedy Album is not right." The same goes for her refusal to be photographed in cuffs for taking a photo that was covered under the First Amendment ("while we still have one.") "Whatever happens to me in the future, I want these young people, especially from oppressed communities and/or anyone thinking about getting into a male-dominated field, to access this point in time, this history, and see that there was a woman who broke the record for most televised comedy specials ever, that she wrote and produced and performed in every single one of them. I want people to get encouragement where they can."

Getting back to work — doing the job that she has been doing for decades — has been an uphill battle, despite generating billions of dollars for TV networks like NBC and Comedy Central over the years. But that doesn't mean she hasn't been busy. In her exile, she's slowly been buying back her entire library. She now owns every season of My Life on the D-List, all 23 stand-up specials and both seasons of her Bravo talk show. She's writing scripts, pitching ideas and taking meetings.

"I sold out Carnegie Hall in 12 hours and then played Radio City the next night — which no comic in history has ever done — just to prove that, even though I'm on the actual president's open enemies list, there are audiences all over the world that want to hear the 59-year-old redhead tell it like it fucking is."

"I wish I could just communicate to the people that I'm meeting with that, yes, it sounds scary: you're afraid that you would take the fall for something or you're scared that the president will come for me again, but you just can't live like that. Any day I'm prepared for the president, or Don Jr., or any of those folks to tweet about me and the wood-chipper to start again."

The problem isn't exclusively the president and his monopoly over the right wing media: it's the infrastructure of Hollywood and its in-severable ties to Washington. It's political by nature. To this day, there is not one single woman who can green-light a project, not even a pilot. There is only a handful of network executives, all older white men whom Griffin calls "the check signers," and each is hesitant to hire Griffin for fear of becoming the subject of Trump's next Tweet. To once again work in this industry, her industry, Griffin's had to resort to her once-proven tactics of gaining visibility through the side door. "I went back to my roots. I did something I used to do — before even Suddenly Susan — in the '90s."

A year ago, Griffin did five Monday nights in a row at the Laugh Factory in Hollywood. "I wondered if I could do a brand-new, good hour of comedy every week, once a week. You always hear about these comics taking three years to come up with an hour of material or having people write for them, which I've never done." She would go on stage, with her mother's old egg timer, and talk about what happened that week, whether it happened to her or was in the news, and once timer was up, the set was over — eliciting a groan of disappointment from the audience. "It was like a five-week soap opera, live comedy experience."

Related | Less Than a Minute Left on Zoom: Cat Cohen and Pat Regan

But Griffin isn't returning to the club scene again. Besides deploying an uproarious anecdote at a moment's notice, the other thing she knows best is her own worth.

"I won't work for free or less than I'm worth because I've already paid my dues." Griffin has wrote two bestselling books. Her debut, Official Book Club Selection: A Memoir According to Kathy Griffin, hit number one on the New York Times bestseller list. Yet she hasn't received any book deals recently, which is confounding considering that publishing makes it rain book deals on terminated White House staffers. "I have a historic story to tell and I'm not going to be a puppy dog and go around begging for gigs. I'm watching to see if people will start to come around to me."

Griffin knows The Photo will stay with her for the rest of her career, and life. She still receives hate mail and death threats to this day. But it doesn't define her legacy. She was one of the few to provide LGBTQ+ visibility on her reality show, publicly fighting injustice like the now-repealed policy of Don't Ask, Don't Tell and raising money for homeless queer youth; she's a strong voice for women's health, encouraging yearly pap smears by getting one, on camera, herself; she showered our armed forces, both overseas and at home, with love by performing for them both in Iraq and Afghanistan and for recovering vets at the Walter Reed Medical Center.

"Yes, it sounds scary: you're afraid that you would take the fall for something or you're scared that the president will come for me again, but you just can't live like that."

She has also introduced her fans to her beloved parents, the late John and Maggie Griffin, (the latter of whom we tip a big box of wine to in her honor). It was Maggie who, despite chastising her on and off camera for years, remained Griffin's biggest fan. And her fans continue to grow, especially as she galvanizes a new fanbase of activists and politically conscious young people who recognize the role of comedy in free speech and fight tooth and bone to protect the First Amendment.

On an episode of My Life on the D-List, at a dinner party honoring Griffin before receiving her star on the Palm Springs Walk of Fame, Suzanne Somers, cataloging Griffin's years of playing "dump after dump after dump," concludes her toast with: "she showed us all."

And she will show us all, again.