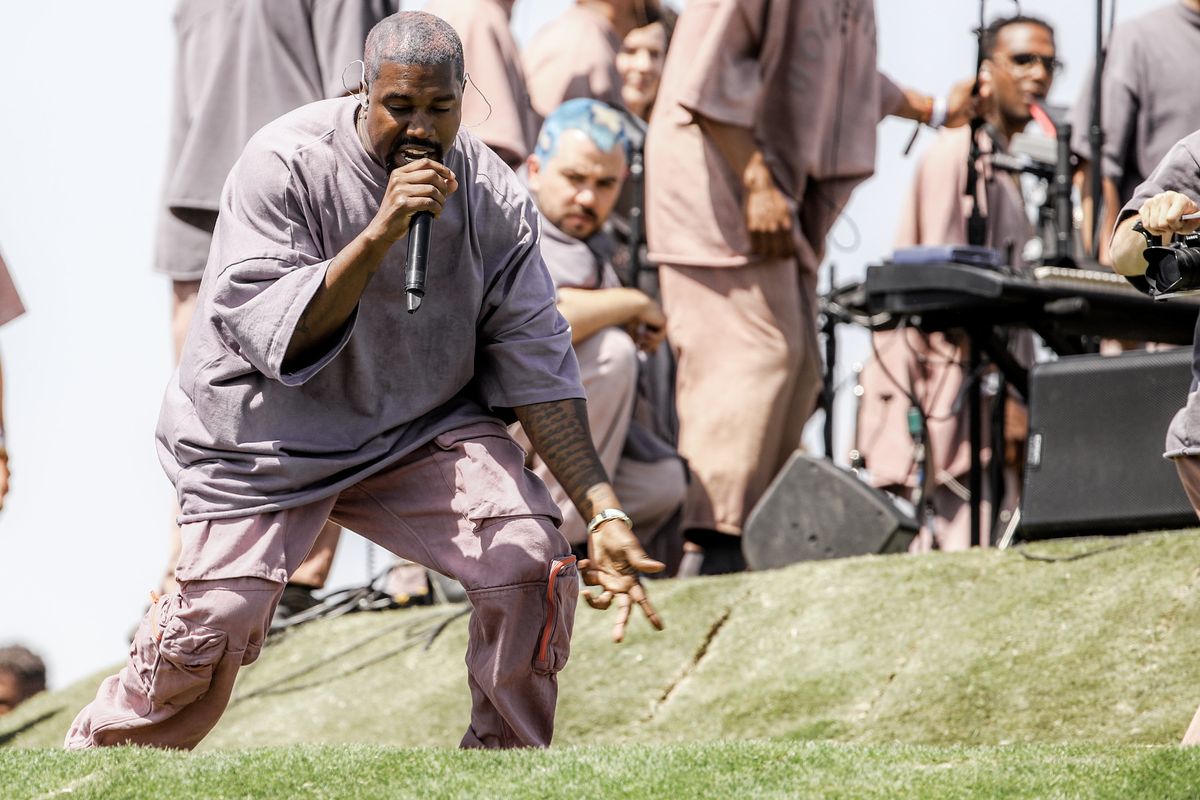 Kanye's apparently been feeling nostalgic lately. In the latest couple editions of his Sunday Service — a semi-religious gathering/concert series where celebrities watch a gospel choir sing dressed in pale lavender uniforms befitting for dystopian candy factory workers and occasionally Kanye freestyles — he took a trip down memory lane, all the way back to the '90s.

The choir shared the Lord's message through the eternal voices of Kurt Cobain, Gwen Stefani and Tracy Chapman. Turns out, it's pretty easy to make any song about Jesus.

Video shows the choir dubbing Nirvana classics "Come As You Are" and "Smells Like Teen Spirit" with God-fearing lyrics. In the former, Kurt Cobain's guttural slur of "memory" has been replaced with "hallelujah," and the lyrics have been changed to: "Hurry up/ the choice is yours/ don't be late/ just confess/ he'll do the rest/ Christ is here."

For "Smells Like Teen Spirit," the choir jubilantly sings "he's contagious/ here we are now/ inspiration... let your light shine/ he's contagious!" You'd never even know the song was inspired by anarchism and "an exploration of meaninglessness itself."

The Nirvana covers aren't a surprise for Kanye — Kurt Cobain is just one of many "tortured genius" figures he idolizes. He and Kid Cudi even sampled Nirvana's "Burn The Rain" on Kids See Ghosts, which Courtney Love, who's attended Sunday Services in the past, approved herself.

Tracy has not yet responded to her inclusion in the service line-up, but Gwen Stefani was very moved by the choir's version of her band's No Doubt's ska-pop classic "Don't Speak" which she famously wrote about her ex-boyfriend and bandmate Tony Kanal after their seven year relationship ended.

"My heart is so full hearing this incredible version of Don't Speak/ Lord Speaks- I'm in shock hearing this song turned into a worship song at Kanye's Sunday Service" she wrote.

You and us both, Gwen!

According to Vice, the rotation also featured a rework of Snoop Dogg and Pharrell's "Drop It Like It's Hot," though there's no video evidence to date.

This Spring, Kanye brought his Sunday Service to Coachella (after he, himself, dropped out of the line-up because of the festival's "archaic" stages) and has been trying to trademark the phrase for his merch, which has raised some eyebrows.