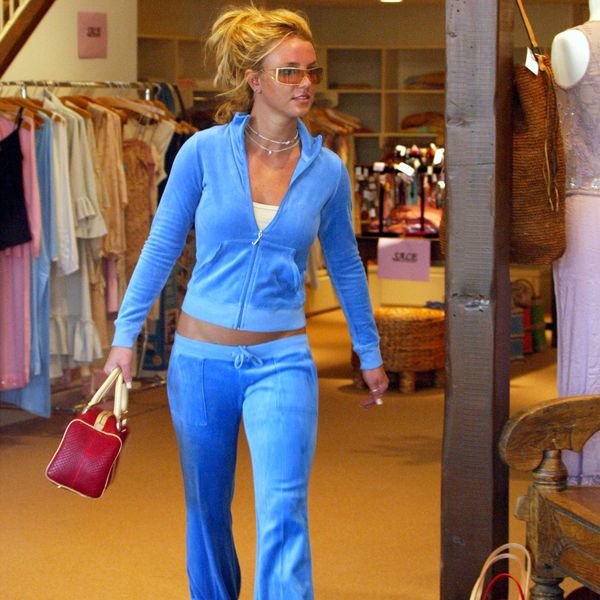 Few things are more synonymous with the early aughts than Juicy Couture's velour tracksuits, which makes 2020's ongoing nostalgia wave the perfect recipe for their revival. The recent endorsements of the brand by the likes of Timothee Chalamet, Dua Lipa and Paris Hilton (which happen to fall on the brand's 25th anniversary) makes looking back at its milestones in pop culture all the more worth it.

Among its earlier moments is a fresh-faced Jennifer Lopez helping to put the brand on the map in 2001 when she wore pink sweatshorts and a matching hoodie in her "I'm Real (Murder Remix)" music video. The following year, Juicy had its first red carpet moment when Lindsay Lohan wore a forest green set (complete with skinny scarf and flip flops).

However, the moment that skyrocketed the brand's popularity came in 2003, when Paris Hilton and Nicole Richie began filming their reality TV show The Simple Life (a cultural reset, as they say). Almost daily, the duo wore matching Juicy Couture sets in every color of the rainbow both on and off-set.

The suit became a global phenomenon, immediately affiliated with Hilton (who still has a full closet devoted to the sets) and Richie (who gamely donned an emerald green short-sleeved version for PAPER's Transformation issue in 2018). Their off-duty appeal made Juicy Couture resonate with a variety of women — regardless of their size or economic background — and they became instant covetable treasures.

"We cared more about the fit, that it was flattering for women's bodies," co-founder Pamela Skaist-Levy told WWD. "We knew everyone had body flaws and the tracksuit looked good on everyone."

And who could forget Britney Spears, then the ultimate tabloid fixture and another unofficial Juicy ambassador, who gave us the iconic image of her going out shopping in a royal blue set paired with a cropped tank top and rimless sunglasses (ah, simpler times).

From there, Juicy fever continued to take over Hollywood, television and music. Amy Poehler sported a Hilton-esque bubblegum Juicy tracksuit in Tina Fey's comedy Mean Girls. Kim Kardashian, weeks prior to the premiere of Keeping Up with the Kardashians, wore a hot pink set to the 2007 VMAs. Versions of the track pants with "Juicy" bedazzled on the butt were even parodied on Saturday Night Live. Throughout the decade, paparazzi shots of Miley Cyrus, Beyoncé, Madonna and Nicole Scherzinger in Juicy Couture velour commanded magazines, blogs and the overall rise of athleisure in womenswear. The designers were quick to take notice and appreciate their brand's massive popularity.

"Once I was at the Beverly Hills crosswalk and looked around and every single person was wearing a Juicy tracksuit," co-founder Gela Nash-Taylor recalled to WWD. "I freaked out, it was everywhere and we were excited to see people wearing our clothes."

In recent years, Juicy Couture (now owned by licensing firm Authentic Brands Group) has been going on a collaboration spree, teaming up with the likes of Vetements, Kappa and Urban Outfitters. It made its runway show debut at New York Fashion Week in Spring 2018 — one of the most-discussed events of the season. Lopez even wore a black Juicy hoodie in 2019's Hustlers, an ode to her style that put the brand on the map 18 years prior.

The celebrity love for Juicy Couture has only continued into the current decade. Nicki Minaj, Rihanna and Hilary Duff all rocked the brand in the 2010s. Even Kendall and Kylie Jenner, alongside Anastasia Karanikolaou, wore matching sets in their early days (the trio's throwback shot made headlines in 2017).

Kim Kardashian West's latest SKIMS collection was inspired entirely by the Juicy velour sets she and Paris Hilton rocked in the early aughts looks as well; their campaign went instantly viral for its play on paparazzi shots — complete with flip phones and their metallic Louis Vuitton Miroir Alma GM's.

Besties for life!!! Me and @parishilton in our skims velour U guys have no idea how tracksuits were our uniform and so happy to make a skims version

The renewed love for aughts culture has also birthed a new set of Juicy Couture admirers. Timothée Chalamet recently wore his own pink velour Juicy hoodie for a GQ editorial. Iggy Azalea posed in the brand's Kappa line on Instagram. And, in addition to SKIMS, numerous brands have created their own versions of the original velour ensembles: Dua Lipa wore a lime green set by the Petra Collins label I'm Sorry for photos that look like they're straight from 2003.

To commemorate a quarter-century in business, Juicy Couture is releasing a limited-edition anniversary capsule on its redesigned website. In partnership with NYC Alliance, the line will feature the brand's signature tracksuits, jumpsuits and T-shirts. A larger collection is also in the works, to be introduced this holiday season and next spring.