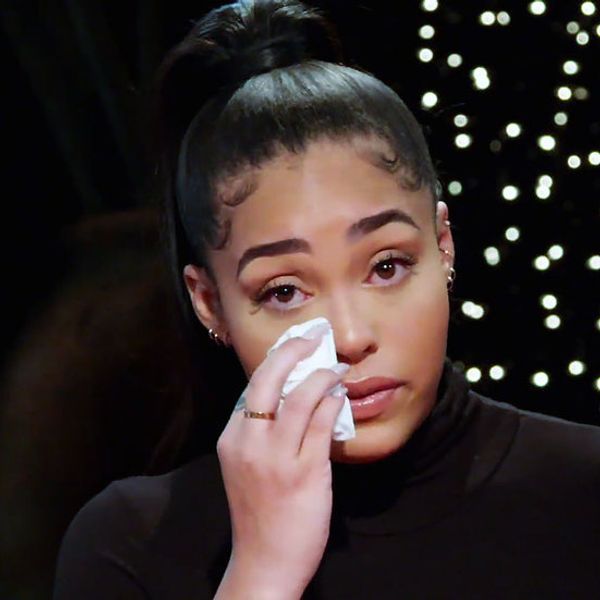 What Do You Wear When You've Been Publicly Shamed?

There are a number of things to consider when you've been publicly shamed. Should you change your phone number? Close out your socials? Dye your hair? Beg Richard Branson to take you to space? Elon is even less reliable.

Over the past week, the public at large witnessed two public flayings: one deserved, one decidedly less so. There was the Michael Cohen hearing, during which, according to headlines, the man apologized to the public and Melania Trump for various crimes ("I am not a perfect man. I have done things I am not proud of. And I will live with the consequences of my actions for the rest of my life"). A scan of the transcript yields not a single utterance of the word "sorry." And then there was the whole Jordyn Woods thing.

For those who have somehow managed to free themselves from the Kardashians' vice-like grip on pop culture, here's a quick explainer: news broke that Jordyn Woods, Kylie Jenner's longtime best friend, had "made out" with Tristan Thompson, Khloé Kardashian's boyfriend and the father of her daughter, True. Thompson plays basketball for the Cleveland Cavaliers, but cheating seems to be his favorite physical activity — last year he was caught on video with several women, just weeks before Kardashian gave birth.

Woods' condemnation was swift. She moved out of Jenner's house in Calabasas. Death threats were sent to her family. And so on Friday, she appeared on Jada Pinkett Smith's Facebook Watch talk show, Red Table Talk, to tell her side of things. And according to her version of events, there wasn't all that much to tell. Woods claimed that the older, richer Thompson kissed her (without consent) dispassionately, while she was drunk. She said sorry a countless number of times, wiped her eyes while "accepting responsibility."

The public — or at least Twitter — seems to have rallied to Woods' side, especially after Khloé Kardashian shared a rather histrionic perspective, i.e. "You ARE the reason my family broke up." But before going on the show, the online vitriol against Woods had been relentless (the memes about Kylie cutting off her phone plan were pretty good). She told Pinkett Smith that her family could not leave their house, that someone said her father, who passed away a few years ago, had deserved to die. They discussed the venom thrown at Black women in the public eye. People are psychos, especially when it comes to attractive young women (Woods is only 21) accused of sexual might-as-well-be crimes. It was all very Lewinskian.

The month after Bill Clinton was acquitted of perjury and obstruction of justice charges, when Monica Lewinsky was 25, she wore a black suit for an interview with Barbara Walters. LeeAnn Rimes wore black (tank tops, dresses) in multiple interviews about her affair with former teen idol Eddie Cibrian. Lorena Bobbitt took the stand in cream. When Kim Kardashian gave her first public interview about her leaked sex tape with Ray-J, she wore a white button-down. When Ray-J chose to discuss the matter, he selected shocking pink.

Woods, in her interview with Pinkett Smith, also wore black: a simple turtleneck dress, tight but not revealing, with minimal jewelry and subdued makeup. She looked very beautiful and very sad.

According to a 2010 piece in The Orange County Register called "What to wear to a public apology" (it was pegged to Jesse James cheating on Sandra Bullock. Were we ever so young?), there are a few rules by which people can abide when apologizing in the public eye: soft-colored shirts to signify sincerity, solid colors on top to direct focus to the face, no patterns. The piece of course focused on men, rightly deeming their public apologies generally insincere ever since Kobe Bryant "bit his lip in a beige sweater in 2003."

When publicly shamed, women often stick to the solid color, no-pattern thing. But since the apologies tend to revolve around matters of sex, the key to an outfit for an apology is to seem demure — at least by mainstream standards. Look young, pink, fresh-faced. Look beautiful, but not like you are trying. Don't shove your curves in anyone's face, but make sure they're still visible. Don't go too tailored (tailoring equals power). Cry, but don't smear your eyeliner. Naomi Wolf is a flawed thinker and writer, but she pretty much spelled it out like thirty years ago.

Apologies, as a concept, tend to be gendered. Women apologize more, are told to do it less, and are then asked what's wrong when they actually follow through.

If utilized properly, style is a weapon; the way you dress can easily alter others' perception of your class, your character, your age. Fran Lebowitz, a style icon for the ages, once said that the great thing about clothes is that "they're artificial—you can lie, you can choose the way you look." And so when leaning into the spectacular artificiality that is a public apology, the clothes are nearly the most important thing, second only to a voice choking or the delicate swabbing of tears. For women who want to be believed (impossible), this means bending to the demands of patriarchy, aka don't look like a slut and don't touch anything near the menswear section.

Apologies, as a concept, tend to be gendered. Women apologize more, are told to do it less, and are then asked what's wrong when they actually follow through. During the height (hell) of girlboss-y, Lean In feminism, the Internet was riddled with headlines about how women should apologize less, or not apologize for apologizing, or find an alternative way to phrase a simple "I'm sorry." This is all mostly bullshit. The simple truth is that everyone should apologize when they do something wrong, which men do not do enough, and that no one should apologize when it's solely done to mollify, which women do too much.

If you go by her version of events, Woods was forced to apologize for nothing. Her remorse was real, the event that required it a phantom. She looked really great.