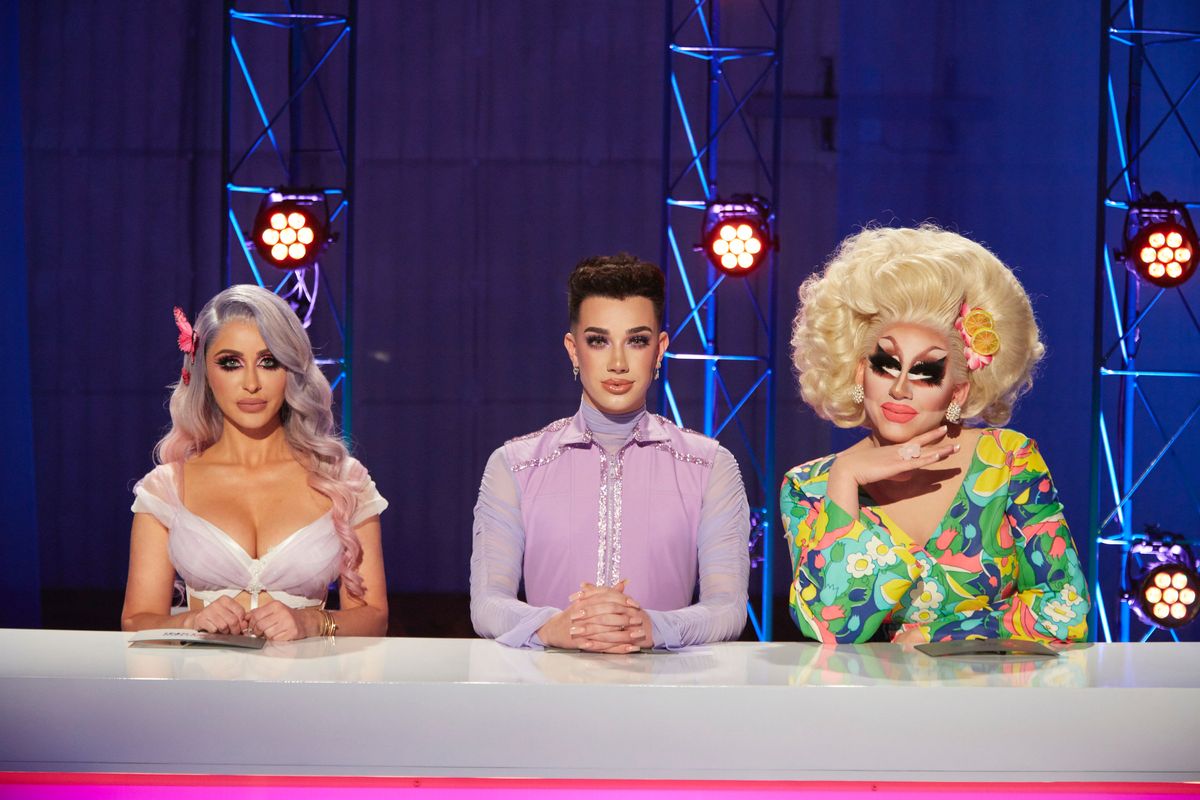 James Charles Is Looking for America's Next Top Influencer

The Wild West days of beauty YouTube are long over — cue the tumbleweeds. No longer can you pop on a nude lip and gain millions of followers in the blink of one heavily-lashed eye. These days, influencers have to set themselves apart with quirky editing and clickbait titles, while finding some way to make their content memeable — or TikTokable. Finding a point of view and a way to break through the noise is vital for securing attention, brand deals and an actual career.

It's qualities like this that beauty megastar James Charles was looking for when he cast his new reality competition, Instant Influencer, premiering Friday on YouTube. Charles launched the casting on his own channel, challenging his 18 million subscribers to impress him enough to be flown to LA and compete for exposure, prize money, and a coveted James Charles video collaboration. Six were successful.

"There's so much more that goes into being a successful influencer," Charles tells PAPER over the phone from California. "Of course, you have to have at least some level of talent. What's really important is having a strong camera personality and being able to interact with people and being able to sell products and being able to work together and come up with trendy ideas and always start new things."

This acknowledgement that an influencer's main job is to influence, and therefore sell, is refreshing (if depressing) to hear out loud, and a major aspect of the show. The pilot episode's first main challenge tasks the six contestants with filming and editing a video for a product, and the judging hinges more on their ability to inspire viewers to buy it than their makeup artistry. An influencer's mission, Charles insists, is to inspire their followers to take some kind of action.

"You have to have a loyal fan base that is supporting what you're doing," he explains. "Even if it's not necessarily selling a product, it can be literally having them swipe up to a YouTube video or wanting them to check out your new website or check out like, the podcast that you just got started on." For Charles, "selling product is really almost like a metaphor... for being able to engage with your audience." It's "by far the absolute most important [part] of being an influencer, because if you don't have an audience that cares about what you're promoting or selling or driving people to, then you have no job."

If anyone can teach these skills, it's Charles... with his millions of loyal followers (he's currently the most subscribed beauty guru on YouTube) and ability to create and sway beauty trends. The show's coterie of guest judges (joining permanent judge Norvina, creative director of juggernaut beauty brand Anastasia Beverly Hills) wield similar power. Paris Hilton, often called the original influencer, is the show's first guest judge, and between her trademark catchphrases she imparts the very real business savvy that has helped her build an empire.

"She went into the industry a long time ago and has always had this whole like, 'That's hot,' branding around her," Charles acknowledges. "But one thing that I know she's really working on this year and in the future, is breaking down that wall and showing people that she's a real awesome, humanitarian, business woman, philanthropist that really just cares about a lot of different projects and stuff. She's a really just cool person who's real and isn't always in that character. I think we really got to actually see that on the show." He only saw this side of her when the filming started. "Even when she set up to bat and the cameras were rolling and she was actually talking, giving the contestants feedback, I was like oh my God, this is everything, because that's honestly not what I expected."

Charles is also clearly hoping to show a different side of himself. Instant Influencer is launching almost exactly a year after his internet-breaking rift with fellow beauty gurus Tati Westbrook and Jeffree Star, and while the timing of the launch isn't intentional, it does have him reflecting on how much his life and career have changed in the year since.

"Obviously I went through probably the worst internet scandal in history last year," he says. With the unhesitating candor that has enamored so many fans, he admits these past twelve months were "probably the worst" of his life. " But Charles has come out the other side of the scandal with some welcome wisdom.

"I've learned so much as a person and I feel like I'm a stronger, smarter person from it, and I'm almost grateful that it happened in a way because I just feel like it really improved me and the way that I interact with my friends [and] everybody in general," he says, For all his fame and controversy, he's still disbelieving that any of this is actually happening. "I'm launching a freaking show. I literally have my own show," he laughs. "I'm just more than anything grateful, that there are people out there that are willing to support no matter what people go through, that want to know the truth and care more about the truth rather than just like stupid internet scandals and rumors that people made up."

Still, Charles teases that he's not above using his history of public dustups for entertainment value, hedging that one of the show's future episodes might challenge the contestants to deal with their own internet scandal. Will our instant influencers get canceled? "Perhaps," he says in a knowing tone.

No reality TV competition is complete without some entertaining drama, and Instant Influencer will have its share of that, as well. "There's definitely a few of them, that's for sure," says Charles, who also served as the show's executive producer and would regularly get cuts back from the editing team and find himself shocked over what he'd missed. "We were watching it back and being like, 'Oh my God, like when did that even happen?' There's definitely a few pretty intense moments on the show that I think viewers will be excited and a little bit shook [by]."

While he promises plenty of drama, Charles is also hoping to reinvent some of reality TV's crueler tropes. Starting with eliminations. On Instant Influencer, the departing contestants find out they've been sent home when Charles visits them himself to break the news, an intimate touch that the beauty guru felt was important to add.

"We really want to make the show focused on education," he insists. "If we send somebody home, it wasn't because they sucked and it was not because they were doing something wrong in the competition and we wanted them out. It's really just because we wanted to pick the best of the best and see who really has what it takes to be a beauty superstar and who can literally take over the industry."

Even those watching can learn from Charles and his fellow judges, with more and more people turning to content creation as both a distraction and in search of a potential new revenue stream while stuck in quarantine. "People are consuming more content than ever," Charles acknowledges, explaining that his views across platforms have been up since the coronavirus pandemic began. But ad revenue is down, and smaller influencers are feeling the brunt of brands funneling their money elsewhere. While Charles doesn't think the influencer economy as a whole will suffer, it might need to evolve to survive. "I think it might be an interesting catalyst to see other ways for influencers to monetize their platforms and their audiences."

Charles hopes that his show will evolve how viewers perceive influencers, and gain the industry more respect. "That's something that's going to take a really, really long time — there will always be people that don't love the job or just don't really understand it, and that's okay," he proclaims. "I really hope that by people watching the show, that they can see like all that really goes into it. Regardless... I just hope that the people who really care about being an influencer are able to watch the show and get some insight information and helpful tips, more than anything." And if Charles can live his Tyra Banks Top Model fantasy along the way... well, that's just a bonus.