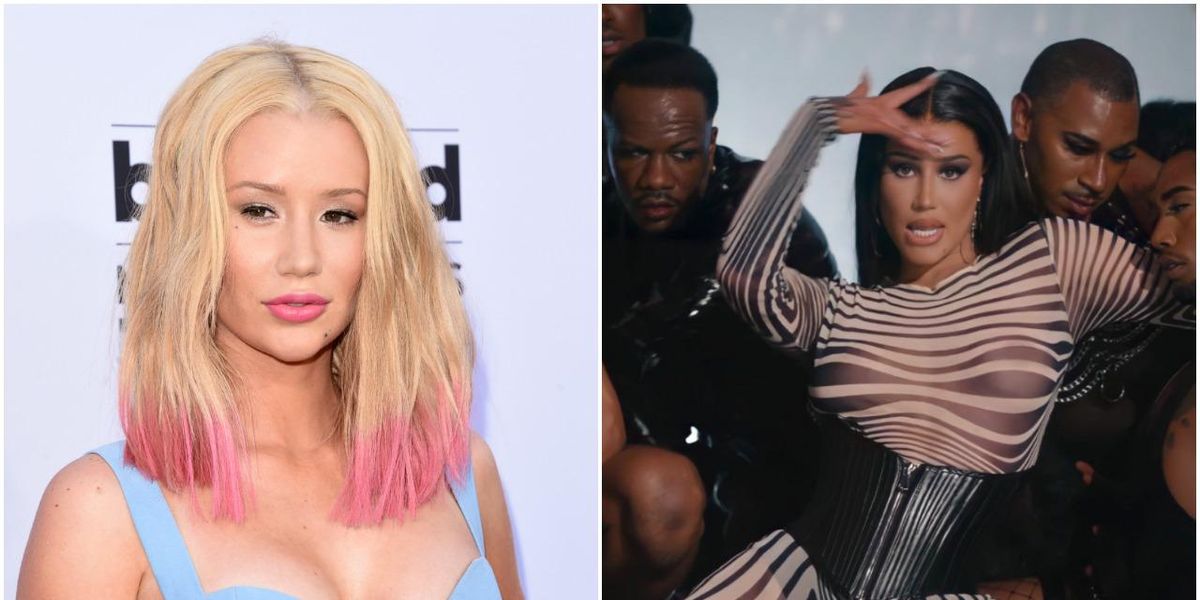 Iggy Azalea is responding to accusations of Blackfishing stemming from her new music video.

It all started last Friday when the rapper debuted the visual for her song "I Am the Stripclub." However, one particular post by fast-fashion retailer Boohoo – in which the rapper is in a black wig and zebra print bodysuit — caught the eye of commenters, many of whom said she had a noticeably darker complexion. And needless to say, the supposed look quickly spawned a number of comments accusing Azalea of Blackfishing — a term coined by writer Wanna Thompson to describe people who try to look Black or mixed race.

Soon, Twitter was filled with side-by-side comparisons of the Boohoo pic and previous photos of Azalea, with some wondering how people could tell them that "this the same person."

Meanwhile, one person went as far as using the eyedropper tool on Photoshop to pull noticeably different "hex/color codes from her face," as another quipped, "They really don't make white women in shades of eggshell or ivory anymore."

y’all tellin me this the same person pic.twitter.com/5bae1k7zWk

l literally used the eyedropper tool on photoshop and pulled these hex/color codes from her face pic.twitter.com/1mWJFQajf0

That said, it didn't take long for Azalea to respond to the backlash on Twitter, insisting in a post that she didn't "care" about the accusations and to "fuck those ppl" making them. But when one critic replied to her tweet by pointing out the "MAJORITY of those people are black and brown," the rapper called the claims "ridiculous and baseless," before claiming she was wearing the same foundation shade she'd "worn for the last 3 years."

"It's the same shade in every music video since 'Sally Walker'. Suddenly I wear a black wig in a club scene & it's an issue," Azalea wrote.

Not only that, but Azalea then went on to post a screenshot of the foundation she used, with a line pointing toward her shade in an effort to prove that "it's on the arm color of a tan white person."

"I'm not wearing crazy dark makeup at ALL. Everyone in the club scene looks darker, it's a club scene!," she added. "I'm sick of ppl trying to twist my words or make shit a problem when all I've done is try a hair color."

I can’t care about something that ridiculous and baseless.
I’m wearing a shade 6 in armarni foundation, it’s the same shade I’ve worn for the last 3 years.
It’s the same shade in every music video since sally Walker.
Suddenly I wear a black wig in a club scene & its an issue.

This is the color I wear, it’s on the arm color of a tan white person.
I’m not wearing crazy dark makeup at ALL.
Everyone in the club scene looks darker, it’s a club scene!
I’m sick of ppl trying to twist my words or make shit a problem when all I’ve done is try a hair color. pic.twitter.com/CGQIOQiWGD

However, she went on to continue accusing her "bored" detractors of "tryna create shit outta nothing online" and alleged that Boohoo had "posted an edit" that made her look much darker than she actually was in the video. Granted, Boohoo has yet to respond to Azalea's claim.

Or maybe the internet could watch my music video and see for themselves instead of tryna dog me because a random page I have nothing to do with posted an edit? Leave me be, I don’t bother anyone, ppl stay tryna create shit outta nothing online.
Just BORED.