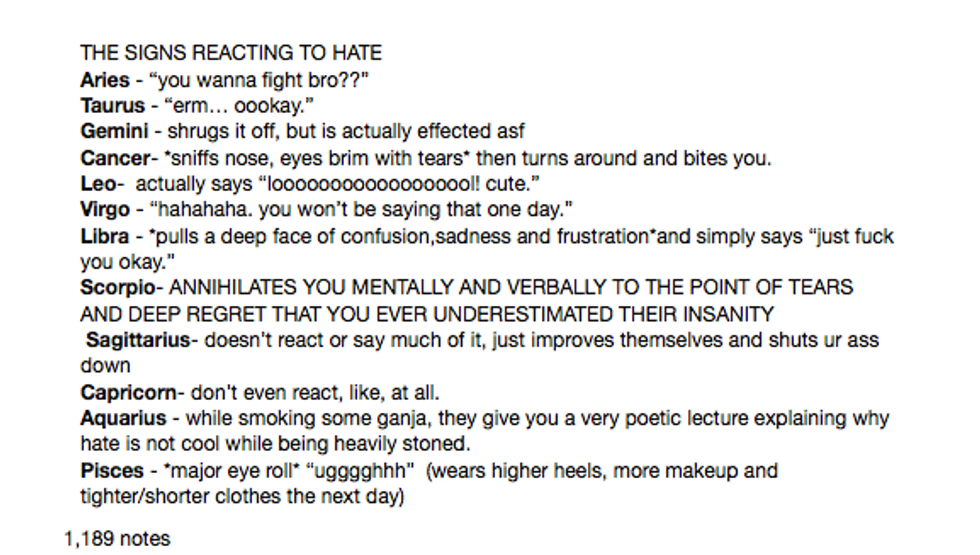 By Sandra Song
PAPERMAG
So last night I was scrolling through my Tumblr timeline (cultivating my "aesthetic," of course) and stumbled across this timely "Gemini Hate Meme."
Exactly what it sounds like, the Gemini Hate Meme is the bizarre new trend brought to you by the nether-sphere of deep Tumblr, in which those born between May 21st and June 21st are derided in those insanely re-blogged "your sign as a" posts.


But, uh, why? The site Meme Documentation, says it's actually a phenomenon that's been going on since last year, a meme descended from a post on the popular astrology Tumblr gothstrology that has since been deleted.
So far, the only explanations for "OK, but, still, why Geminis doe?" seems to boil down to two things, that a) multi-faceted Gemini, which comes from the latin word for "twins," are "two-faced" and b) current Tumblr persona non grata Iggy Azalea and Donald Trump. And a shit ton of those memes revolve around the fact that both Donald and I-G-G-Y are Gemini.
It's not surprising that two ugh-inducing people who have kind of become the standard-bearers of racism as of late will cause might cause a few Tumblr tweens to leap to conclusions -- especially in the name of social justice, which has become a (wonderful) trend among young Internet users. Put through the Tumblr prism, however, that's manifested itself in some very strange ways, including astrological hate.
So just because your parents did the nasty between late August and September, you must suffer the wrath of the Interwebs, forever bobbing in the putrid Trump-tainted waters of Tumblr? Fear not, Gemini, because guess who else is a Gem? Johnny Depp! Angelina Jolie! Marilyn Monroe! Prince! Mr. T! Jussie Smollet! Laverne Cox! Kanye!!
And meme-teens, just a word of advice. I love Bernie too, but every time you validate a xenophobe as a legitimate competitor, Berns cries a little.
From Your Site Articles
You May Also Like
Entertainment

Brian Laundrie 'Lookalike' Was Ambushed by US Marshals