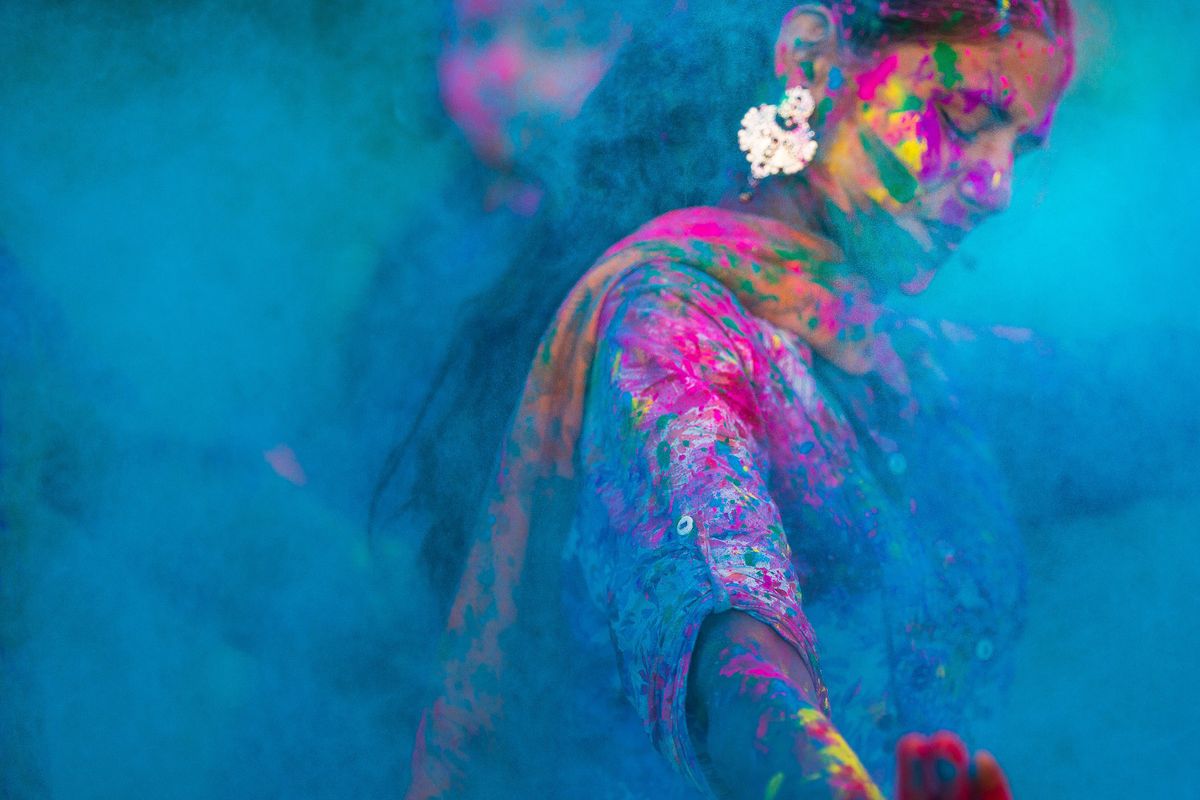 How Holi Became the Festival of Assault in India

India is no stranger to the problem of sexual assault. The country has time and again confronted heightened incidents of rape with public outcries, rallies and protests, calling for an end to the rampant misogyny that makes men believe they are entitled to the bodies of women and girls.

But none of these rules apply on Holi, the Hindu festival that marks the onset of spring and the victory of good over evil. Celebrations for the multi-day event kick off with the lighting of a bonfire, followed by the colorful festivities its known around the world for. There's loud party music, bright colors, water balloons, alcohol, and it's often all playing out on the streets of major cities and town. Its jubilance is crystalized in the popular Hindi catchphrase: "Bura Na Mano, Holi Hai," which loosely translates to, "Don't feel bad, it's Holi."

Let's unpack what this means: in theory, non-stop party — a coming together of friends and foes, where all grievances are forgiven — marked by great food, music and flowing drinks.

In reality, though, that same anything-goes attitude makes room for a no holds barred rampage of sexual assault and harassment where inhibitions are down, spirits are high, and women are up for grabs. Women who brave to venture out to celebrate the day are cat-called, pelted with water balloons strategically aimed at their breasts and genitals, groped under the guise of a friendly hug, and finally, violently assaulted.

The celebration takes different forms from state to state, with some festivities more radical than others. In Barsana, a small town in the state of Uttar Pradesh, for instance, residents celebrate Lathmaar Holi, meaning "Holi with stick-beating." What's meant to be a playful reenactment of a legend often ends in women being accosted and harassed to such an extent that they're forced to take up sticks to defend themselves from boys and men.

In short, the familiar theme that outlines any form of Holi celebration is sexual violence. And the painful tradition is turning women and girls off of celebrating at all.

One young resident of Pune, who asked to remain anonymous, describes how one violent incident put her off the festival altogether: "Of course, harassment and assault is part of the festivities and it has happened to me and all my friends all too often. No one would call it 'assault' though, it's Holi," she told PAPER. "I think one of the most violent instances was when I went to this Holi party at an upscale hotel. Everyone was drunk or high, but my friend and I were having a good time. Suddenly, this man grabbed by hips from behind. When I turned around to push him away, he threw colored powder in my eyes temporarily blinding me. The next thing I know, I feel multiple hands grab me from everywhere. And this was in the middle of a party surrounded by people. No one cared. Once I could see more clearly, I pushed them off and basically ran away. I haven't celebrated Holi since."

"I pushed them off and basically ran away. I haven't celebrated Holi since."

In a particularly horrifying instance last year in the capital, New Delhi, a woman was pelted with semen filled balloons on her way home. Delhi University's Gender Study Group released a report in 1996 documenting how instances of sexual harassment and assault peaked during Holi, pointing out that 60.5% of the women staying on the campus that year reported aggravated harassment around the holiday.

A popular way of perpetuating assault is through drugging victims, often with bhang, a milky cannabis infused concoction that's widely circulated during the festival as a 'party drink.' The taste of the drink is so similar to other softer beverages — like thandai (a spicy milk-based cold drink) — that they're often interchangeable. Victims unaware of this are often offered bhang and told it's something else, or their drinks are laced with cannabis or other substances to make them more vulnerable to assault.

It's a well-known problem that's been discussed over the years, with local advertisements, publications and YouTube channels addressing its causes and effects with PSAs and think pieces. In many cases, stories of harassment have also sparked wide outrage on social media and led to protests. But who's listening? The outcries are hardly taken seriously because in the end, it'll ruin the 'spirit of the holiday.' The pain and violent assault of women is diminished and disguised in the spirit of the season and a range of bright colors.

"It's inappropriate, but you can't protest or say no. It's just rude to do that, and you'll be told you're ruining the festivities."

One 'solution' that's been offered? Ban women (not men) from the festivities altogether. Families will sometimes restrict women and girls to their homes, and hostels and hotels will enforce curfews solely for women, forcing them to stay indoors and restrict their mobility — "for their own good." In 2018, undergraduate women across the University of Delhi were put into a lockdown by their dormitories on the day of Holi. Naturally, there were protests, which were then met by ignorant statements by Indian politicians defending the decision.

"When you are 16 or 17, you are hormonally very challenged," Maneka Gandhi, the Indian Union Cabinet Minister for Women & Child Development said. "So to protect you against your own hormonal outbursts, perhaps a [boundary] is drawn."

It's an infuriatingly familiar discourse around sexual assault, where it's up to the victims to protect themselves, and not the perpetrators to stop. Still other women and girls are told to simply be polite and take the harassment. "My family never imposed restrictions on me on Holi," Vidhi Purohit, a fashion designer based in Mumbai who lives with her parents, said. "I was told to be careful, but that's it. Random men approaching you to put colors on your cheeks or simply give you a hug is considered normal." She added, "It's inappropriate, but you can't protest or say no. It's just rude to do that, and you'll be told you're ruining the festivities."

So what can you do if you are assaulted at Holi? Report it and expect justice? Fat chance. Unless you can prove you were raped, in most instances the police will blatantly refuse to take you seriously.

In a 2018 Guardian report, a young woman who was attacked by group of men on the day of Holi describes how she was casually dismissed by the policeman."I was deeply agitated, but the police said they couldn't lodge a case. They said it was Holi – they couldn't do anything about it," she said. Despite the international #MeToo discourse and increased conversations around sexual assault, consent continues to be treated like an alien concept around the festival.

Meanwhile, women across the world often find themselves quite literally pushed out of public spaces through harassment, assault, and various other forms of violence. Holi, which is supposed to be a celebration, has just morphed into another excuse to reassert the belief that women belong indoors. The mindset behind normalizing such behavior or breaching consent in the name of celebration is that sexual assault, in the end, is not a big deal. Women's bodies are commodities made for men to exploit, and if it weren't for laws or "political correctness," it'd all be okay. This kind of violence thrives in the face of silence and denial.