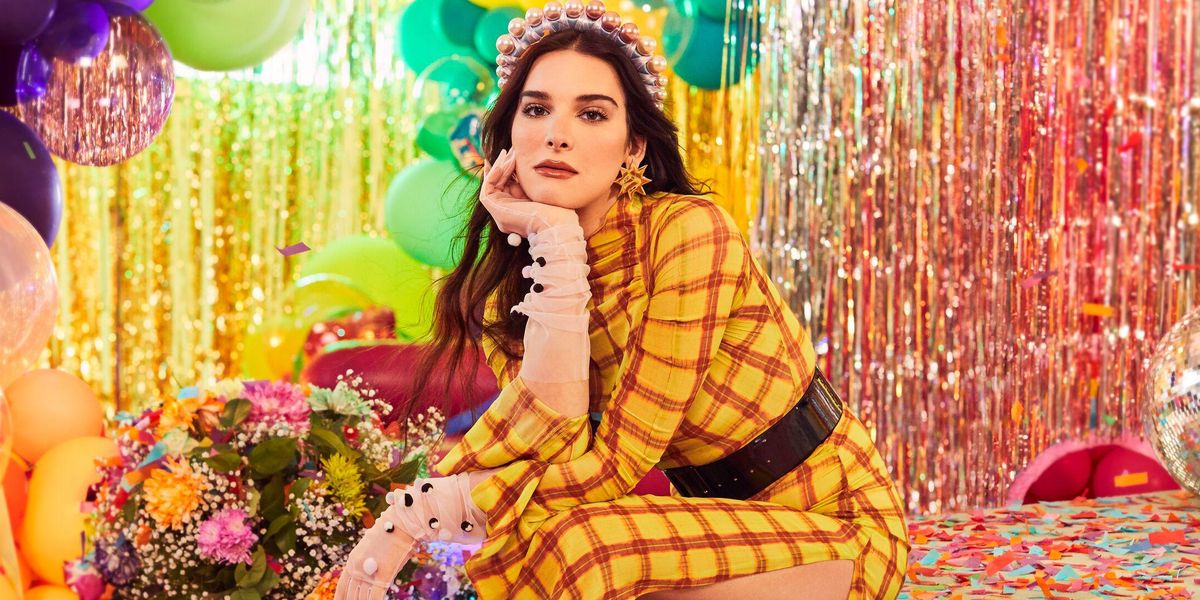 There was a time when Hari Nef wasn't a big Pride girlie.

The model and actress stepped away from the glitter and rainbows for a while, disillusioned by the way others tokenized her identity for a singular month of the year. It felt like a social experiment on pumping rainbow-fueled capitalist propaganda. It gets disheartening after a while, Nef explained, being the spokesperson of a community that has so much more to offer the other 11 months.

But when UGG, a brand whose sequined pink booties were a rite of passage in so many young women's lives, reached out to Nef for their upcoming Pride collection, she felt the project aligned much more with her inclusive values. She'd seen their work before, working directly with Black designers in the LGBTQIA community like Telfar Clemens. UGG gave space for joy and expression to those who need it most with their platform, something Nef values tremendously.

"I'm not a member of my community that sits in the most dire crosshair of need and oppression by any stretch of the imagination," she said. "UGG is the first Pride thing I've done in years after shutting the door and being like 'I'm not gonna let this define me anymore.' I'm now realizing that I can celebrate pridefully and that my strength is in many other things."

The SoCal-based boots, slippers and slides brand is set to launch a Pride capsule next month to celebrate the most joyous time of the year. With a maximum donation of $125,000 to the Pacific Pride Foundation and GLAAD, the fuzzy fur empire is putting their money where their mouth is and working directly with the Queer community to enact change at the local level.

The model, actress, and writer sat down with PAPER to discuss what Pride means for her, living in a Queer Utopia, and how UGG's latest campaign is about "glamour, glitter, and being gay as hell."

For you, what does advocacy for the LGBTQ community look like, and where does this partnership with UGG fit into that mission?

I'm excited to partner with UGG on this campaign because $125,000 maximum of profits from the sale of this collection is going directly to GLAAD who effects change. If there's anything to be proud of, or to take pride in, it's this. As much as it is a celebration, we have to remain vigilant to the people in our community who need a leg up and those people happen to be my sisters.

It almost feels like so many people call themselves activists nowadays. You reject that label and use your time and energy towards the groundwork.

Activism to me is organizing protests, organizing marches, raising money for legal defense funds. Activism to me is not just showing up, not just volunteering, but creating the structures and securing the resources by which those things come to be. I think that the proliferation of that word comes from a lot of good intentions, but an occasional confusion towards action that we have in this day and age. When it comes to UGG, there is no more you can do as a purveyor of luxurious, cozy, colorful, footwear than simply channel the funds toward a cause that makes a difference in the lives of the people you're selling the shoes to. That's something we can all feel good about.

This is the first summer in two years that we'll be able to celebrate Pride with parades on the streets and large gatherings with friends. What are you most looking forward to this summer as we slowly return back to "normal"?

I live a walk from Stonewall, where even right there in Sheraton Square you can find drag queens giving shows and turning looks in the middle of the day on a Wednesday. I'm looking specifically at engaging with volunteer work in my immediate community with a newly minted organization called Queer Care connecting trans people recovering from gender-affirming surgeries to volunteers. Pride doesn't really begin or end in my life, it just kind of keeps going.

What's the most rewarding part of interacting with your community through this Pride campaign?

Stepping away, and then reengaging clarified for me that I'm not just a careerist Grinch who wants to show up to work, make a dollar, and go home. It is so easy to integrate infographic activism, clickbait activism, and reposting. It's so easy to integrate that into a personal brand that you profit off of. It's harder to put your money where your mouth is, and change somebody's life. GLAAD is changing people's lives. What I do as an actress, a writer, a model, I bring comfort to people who need it. But simply doing those three things isn't saving anybody's life. I can partner with the people to make that kind of an impact and somehow integrate the little tap dance I do with the very act of courage that organizers, activists, and nonprofits do.

Hearing about these shoes, the aesthetics, and all the love directly from the community that went into this campaign set, would you call it a Queer Utopia?

There was a utopian sense of fantasy wish fulfillment, because I wish that my prom had been like that. I wish I had gotten to be a queen at prom. Shout out to all the Queer babies this year who lost out on their proms. These are really important moments for tender people who need to be affirmed and need a taste of that joy. If you can't get the exact version of it this year, throw on a pair of UGGs, crank up the Lil Nas X on your Bluetooth speaker, and do your best. At least you don't have to wear heels.

If the Queer community could take one thing away from this collaboration, what would you want it to be?

UGG slide, slippers, and sandals for everyone. If you have the dough, if you have the bread, if you can afford it, we're working at a very accessible price point. But if all you have is the literal bandwidth of your internet, you should look at these beautiful images. It's about joy and abandon, and even a little hedonism as a treat. We kind of get the short end of the stick as a community so we need to pay it back to ourselves and allow ourselves to indulge in Queer abundance and Queer excess.