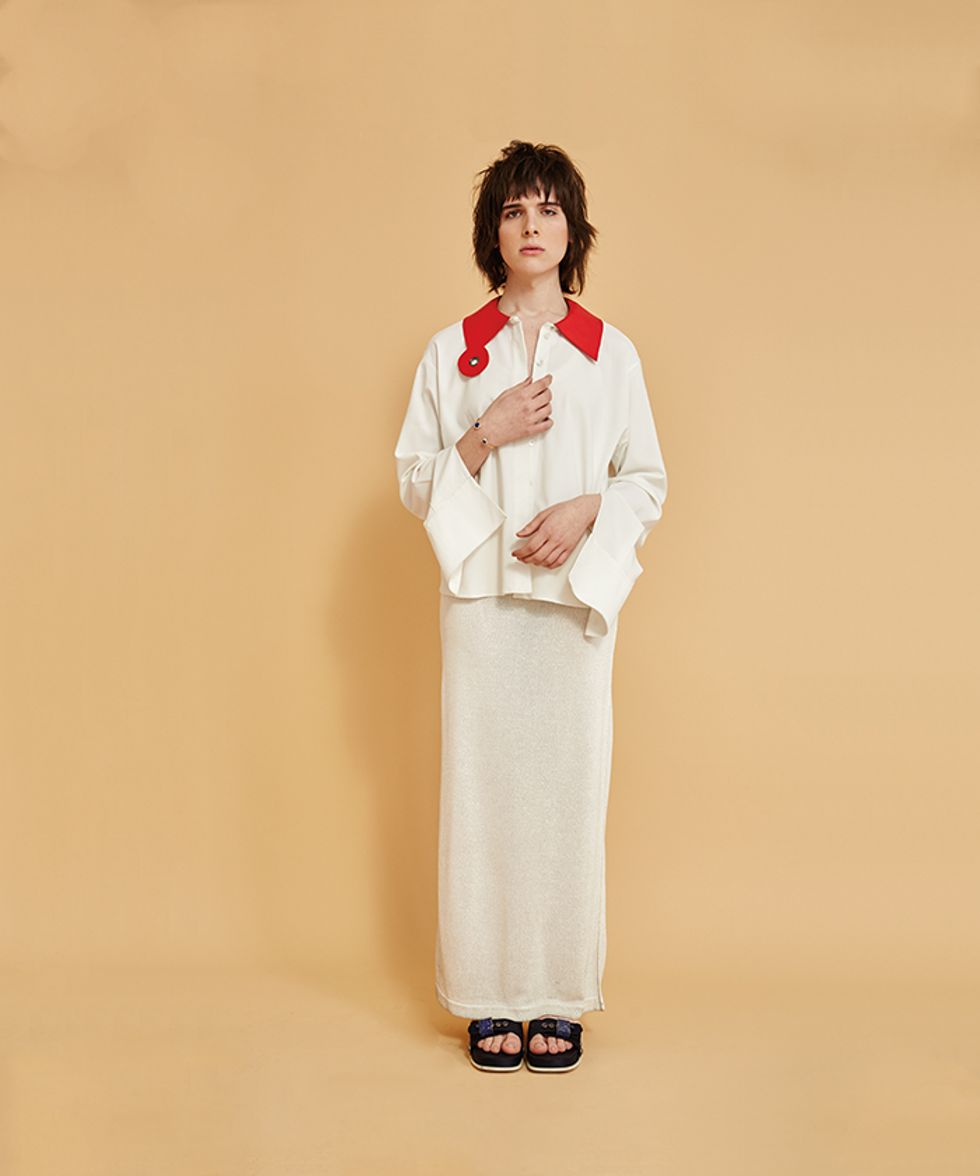 by Emily Warman / Photography by Kathy Lo
PAPERMAG
Photo by Kathy Lo.
PAPER is proud to present a conversation with Hari Nef -- model, actress and member of the Beautiful People Class of 2015. Read on for Hari's take on the American Dream (the theme of our April issue), and meet her classmates here.

What was your childhood like?
I grew up in Newton, Massachusetts, which is a suburb outside of Boston. It's a typical New England suburb -- very pleasant, very Jewish, with great public schools where nothing bad ever happens. It's a lot of people walking around thinking that they live in New England and that they're enlightened and super liberal, but mostly they're a little apathetic. I felt like people in my town were OK with everything so they cared about nothing. It was a nice place to grow up, but it wasn't very fun. I definitely wanted to move to New York for the longest time. And I did.

I was looking at your Tumblr, and you answer a lot of questions on there. Do you see yourself as a resource for the trans community on that platform?
I do. I mean, It's not necessarily something I chose, but a lot of trans women who find themselves in the public eye... I think a lot of girls get really paranoid about the idea of being seen as a woman by other people and having their femininity go unchecked, and they want to make sure their femininity is appreciated and observed, and a lot of the time that manifests in a rejection of the trans community -- a silence about anyone else's story other than your own. I never had the option of being stealth trans. I transitioned after I moved to New York and I kind of transitioned in front of everyone. People always knew that I was transitioning. I don't mind talking about it; I'm very comfortable sharing information about myself, and I don't hold that as something precious I need to hide for the sake of being chic or respectable. I try to help if I can, especially when you have these young girls who are just starting to transition. I'm always talking to these 16-year-old girls from Wyoming and Minnesota. It's as important to me as answering emails about booking. Why am I even doing this if I can't help girls?

What do you think it is about Tumblr that makes people want to reach out to you in this way?
I post things on Tumblr I wouldn't dream of posting on Instagram or Facebook or Twitter. The thing about Tumblr is that it's even more focused around youth. "Grown-ups" don't go on Tumblr, really. A lot of the people I interact professionally in New York, most of them aren't on Tumblr. When I'm on Tumblr, I'm talking to people who generally are not in New York, who are isolated and dispersed around the world but all come to the same place based on identity or things they love or aesthetics they appreciate. I think it's a really good platform for kids whose immediate community isn't necessarily cutting it for them. You can carve out a little chunk of cyberspace. It's cultural production and it's accessible to anyone who wants it. I would not be where I am now without Tumblr and without my Tumblr followers. They've inspired me and helped me do so many things. I feel a little dorky being like, "My Tumblr!" but I think it was the original playground to experiment with myself.

You're involved in so much fashion and film; what is that like while you're in the process of transitioning?
It's really difficult. On one hand it's beautiful and sublime, because I'm finally able to walk into certain roles, certain visual contexts, even certain professions the way I've always wanted to walk into them, which is as a woman with a women's body. I became so much of a better actor when I started playing female roles exclusively. It's really difficult to cast a trans woman -- or people think it is. There are no trans roles, and if there are they go to Jared Leto or Eddie Redmayne or Elle Fanning. And yet people are booking us more and more. I'm OK with that because I get to work, but will there ever come a point where I could play a woman in a realistic, naturalistic drama and have there not be the word "trans" in the script? In terms of trans narratives, people really only care about trans people insofar as the moment of revelation, the drama of transition. After she transitions or begins to transition, it's like, "Where's the drama?" There need to be more opportunities for trans women to step into roles or bookings and bring what they have to the table, versus performing a certain aspect of their identity. If somebody has to do it it should be them, but what comes after Transparent? What comes after Orange is the New Black? I want to be in a period piece in a time that comes before hormones. Could people watch that and not have a negative reaction to it for historical inaccuracy? That could be cool.

How do you feel about what's going on with Bruce Jenner?
I feel bad for Bruce Jenner. I don't know what's going on with him and I don't think anyone should presume to know what's going on. I don't think people should be using any names or pronouns other than the ones he has on the record. If I were a grown man in the international spotlight and had some kind of epiphany about myself that I were trans or I weren't, I would definitely feel extremely caught between a rock and a hard place. And what the media is doing, for instance In Touch photoshopping makeup on him -- those are teachable moments in terms of what not to do. You can't turn someone's identity, or your hypothesis about their identity, into a circus.

Let's talk about the he/she/me campaign for Selfridges' "agender" pop-up shop that you starred in. How did that come about and what was the reaction?
It was beautiful. Unlike anything I've ever worked in or ever done and unlike anything I've ever seen. I thought it was kind of funny because I showed up on set and, when I saw the other folks they had cast, was thinking to myself that if I had been staying in London for an extended period of time, this is who I would have wanted to hang out with. It's fascinating. I'm not going to name names, but in the months leading up to that I had been put up for an agency or two, and no one ever wanted me to come in -- they said that the market was too narrow for them to make money. But all of a sudden, dot dot dot... It's interesting to see this kind of stuff not only become stuff that you can accept or tolerate, but something that is beautiful to celebrate. Glamorous. Aspirational. That's the only reason I find modeling halfway fascinating. The idea that I can insert myself into a discussion of beauty, something from which I felt exempt almost my whole life? Suddenly now that I'm a trans woman, I'm a model?  That just blows my mind. I always wanted to be beautiful and I never thought I was. But the cultural definition of beauty shifted around me, and all of a sudden I was led to feel differently.

What's coming up for you the rest of this year?
Television. Modeling. Theater. There are documents flowing in and out of my inbox, there are some contracts that are going to be signed this week, there's some flights to L.A. happening, there's even some stuff about to come out next month or so. I wish I could tell you more; it's not like I even have that much to hide. I'm in college but am about to graduate. I have no idea what's going to happen. The industry is a very surprising place to be right now. I'm just going to go where the work is. All I want to do is work.

What does the American Dream look like and feel like to you?
The American dream to me is the unlimited potential to manifest. I was a short, overweight 15-year-old Jewish boy in the suburbs of Boston, looking through $20 fashion magazines in Borders and watching films I illegally downloaded and looking at party photos from New York nightlife. I saw so much that moved me and was beautiful to me and glamorous to me, and alluring and fascinating to me, and there came a point where I realized that the stuff that I liked was literally part of a person that I could become. Regardless of sex assigned at birth, gender assigned at birth, regardless of anything, if you shout something long and loud enough it will eventually become true. And if you work really, really, really tirelessly hard. I'm lucky I have access to a lot of things -- I'm a white woman living in America and it's a lot easier for me than it would be for a lot of other people. And yet the hand of cards I'm holding is not totally the hand of cards I was dealt when I was born. If one cards, two cards three or four cards are different, I think that's the American Dream.