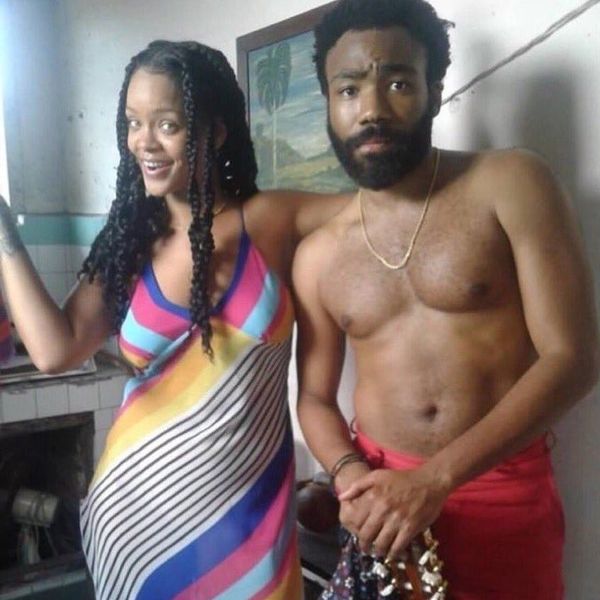 Rihanna and Childish Gambino's Movie Will Debut at Coachella

If you decided to skip Coachella this year, you're in luck: most of it's most exciting moments, including Ariana Grande, Kacey Musgraves, Billie Eilish and BLACKPINK's sets will be livestreamed on YouTube. So, it turns out, will Rihanna and Childish Gambino's highly anticipated new movie (and first ever artistic collab) Guava Island, which will premiere at the festival via Coachella's YouTube livestream. The official date and time have yet to be announced, however, ads popping up on Spotify indicate that the screening will be on Saturday, April 13, the night of Childish Gambino's headlining set.

News of the film first surfaced in December, when a bootleg copy of the trailer leaked on Twitter after the private screening at Glover's PHAROS music festival in New Zealand (where attendees had to turn over their phones). Riri and Glover were also papped together in Havana where the film is set, by Cuban newspaper Visitar.

So far, we know the film's been described as an "action/crime" film, and the icons play a couple: Glover a slacker, head-in-the-clouds musician, and Rihanna, his steely-eyed girlfriend who wants him to get his shit together. However, it also seems to reckon with some of Cuba's politics. At one point Glover vents to Rihanna: "What's wrong with me, is that we live in paradise, but none of us have the time or the means to actually live here."

The trailer reveals the film stars Black Panther breakout star Letitia Wright and British actor Nonso Anozie, and that it was directed by Glover's "This Is America" collaborator Hiro Murai.

Rumors are now circulating that Guava Island will double as a visual album, to go along with Gover's upcoming project, which he's announced will be his last as Childish Gambino. The basis of the rumor is, via Crack Magazine, Glover's Atlanta collaborator, cinematographer Christian Sprenger's public resume on Artistry.net, which lists Guava Island as a visual album.

Tune in on YouTube on April 13 to find out.