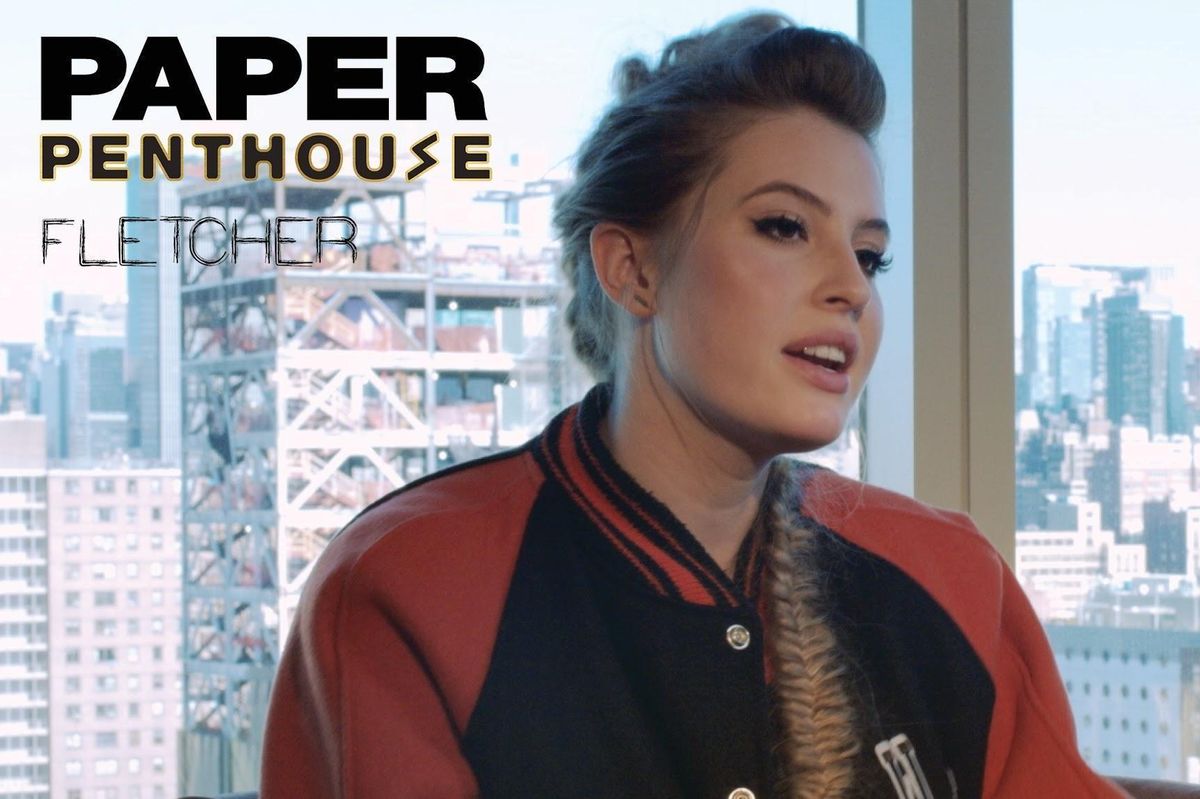 So you're a female who wants to break into pop...how do you do it? Do you need to decide if you're going to be the innocent role-model or the sexy seductress? Should you put out an over-produced video featuring a host of lubed-up back-up dancer dudes, to prove you are indeed worthy being an object of the male-gaze? Maybe, once, yes, but not anymore, not according to FLETCHER.

Since her breakout viral hit, "War Paint", which she released online while still a student at NYU, FLETCHER has been upending expectations. The LA-based New Jersey native has not only consistently proved she's one of the most exciting female artists to emerge in the pop, but it's a realm she's determined to challenge – and challenging she is. As a deliberately unsigned artist, FLETCHER's career has been as un-moderated as it gets. Her decision to portray herself as part of a homosexual relationship in her video for single "Wasted Youth" was immediately jumped on by press and fans who making assumptions about her sexuality. Even in the face of growing fame FLETCHER has remained unquestionably authentic - and she's only just getting started.

Dude, am I right that it's been two years since "War Paint"? How has it been building a career off that kind of success? I mean if that doesn't show what streaming services can do for independent artists, what does.

Right? Exactly. That was the first song I ever put out, and yeah that was in 2015. It was crazy, it became the most virally shared track on Spotify and number two globally for about two weeks. I think it's such an incredible time for independent artists because of those streaming sites, they're allowing artists to have such a huge platform for their music that the label is kind of not necessary--which is so empowering.

But surely you've been courted by so many labels, why did you opt out of that more-traditional route?

You know what? There were a ton of different conversations going on and I almost did end up taking that route, but sometime in 2016 I faced this fork in the road, where I could sign to a label or keep releasing music by myself and build the buzz on my own. That's what I ended up deciding to do and I cannot be happier that I made the decision to like, rock it on my own.

That's really brave, to be so young and subvert this very well-established, well-worn track to do your own thing.

Man absolutely, I was like, "you know what? Hell yeah I can do this on my own," but it was definitely a risk.

Exactly. Even though this era of streaming is something brand new, it's been pretty good to be so far.

"Wasted Youth" has gone off as well, right?

It's been crazy. You know, I wrote the song during a time when I was in a relationship and it's interesting because it kind of had this sombre undertone. It was like, I don't know if this is the best thing or the healthiest thing for me or something that's going to last forever but it feels good in the moment. Regardless of what everyone is saying or the advice people are giving you, it feels good right now and I'm going to go with it.

I know that you were having to deal with a lot of questions about the girl who stars opposite you in the video and what her relationship is to you. That response is so interesting to me, because I feel no one would ask Trey Songz if he is really with his latest video love interest. Did you anticipate it?

For sure, I keep getting the same questions, from fans, in interviews, like, "who is she, what's your connection with her?" I knew Shannon before I did the video with her, we didn't even plan to make the "Wasted Youth" video. We were down at a beach in LA having a bonfire, we started filming and it ended up looking really beautiful. Literally we filmed the entire thing with an iPhone flashlight. The whole music video is lit by an iPhone flashlight, but it's my favorite piece of content I've ever made.

I found it really interesting that you chose to depict a lesbian relationship as well, when you just as easily could have made the story about a heterosexual one. It was so casual, there was no dramatic identity crisis, it was just hey, this is what it is.

Thank you! I feel like in media so often, every same sex couple has problems, you know struggles and there are for sure. At the same time, though, 16 year-old me would have loved to see two girls fall in love in a video and not have it be such a heart-breaking thing. The more we normalize same-sex relationships the less stigma. There's definitely been a shift that people aren't so quick to box themselves into labels which is amazing and I wanted to make a video that felt normal. I'm proud to have made something like that.

It's so rare to have it go down that organically, as well.

I know, usually people dump so much money into music videos and it's a whole process. As it should be, you're framing how you want people and fans to listen to your music. I feel like that video is such an amazing representation of me.

Right. Do you now feel like you need to be continually thinking five steps ahead about how you're represented and what you're sharing and how much you give of yourself?

It's so interesting, I was having this conversation the other day that it's so hard to be a female artist in this current pop space right now, because there's always this unspoken line that you want to be sexy but not too sexy. You want the girls to like you and be your friend, so you don't want to piss off their boyfriends or girlfriends for following you. You want to be funny but not too funny. It's the really frustrating thing about social media. Like what you're going to share and how it's perceived. While, sure, you should filter your content in some ways, you shouldn't be in your head.

Is online representation not as prevalent an issue for male artists? Do you think there's a double standard?

I feel like this is, especially in this YouTube age that we're in, like girls go crazy over these shirtless photos of male Vine stars basically naked, but when a girl does something like that she's a slut and a whore. Like, "look at her showing her body." There's definitely a double standard, but at the same time there's a lot of female artists trying to break it.

I feel you also have a lot less freedom in the genre you're in, as a woman in pop, as opposed to a female artist operating in a more alternative space. It's more of a, "I'm weird take me or leave me," but in pop there are so many eyes on you. It's a totally different realm.

Totally and you know what, an artist that I love for blurring those lines between alternative and pop is Lorde. She's like the anti-pop queen and I love her for that.

I was literally planning to bring up Lorde, I know how much you love her.

Oh my god, I'm obsessed. She's created such a niche. She's a rebel pop princess. She's so many things that you'd never associate with a pop star but she is in every single way. She's redefining what a female pop star in 2017 looks like. I'm obsessed.

Do you feel, given the platform you have now, compelled to advocate for women? Because I mean, you don't have to, you could just put out your music and just enjoy what comes from it.

I definitely feel a sense of responsibility to address the empowerment of women, mostly because that's something that's been instilled in me since I was a little girl. My mum is one of the strongest women I've ever known, she is so badass. I think it's so important to talk about the empowerment of women in the political climate we're in right now. Now more than ever we all want to listen. We need to spread the world of gender equality. It's innate for me. I want to be a part of that conversation.

FLETCHER treated us to an incredible acoustic performance in the PAPER Penthouse - watch her perform "Wasted Youth," "Princess," and "War Paint" below: