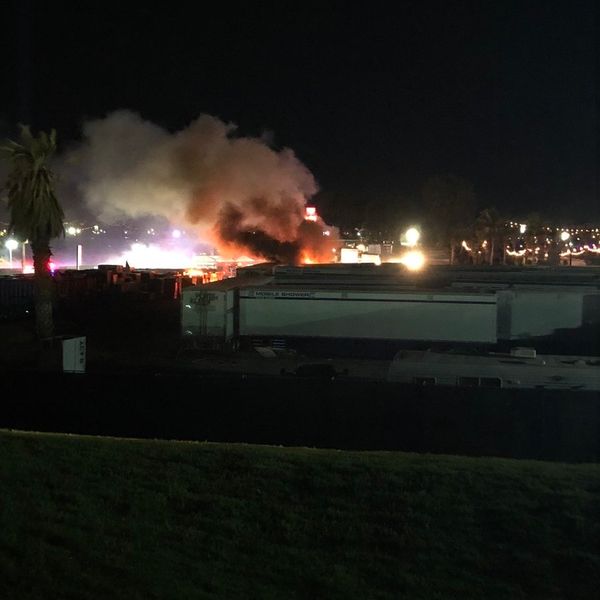 A Fire Breaks Out at Coachella 2019

It looks like Coachella weekend 2019 started with a bang, literally. After Friday night's performances featuring Janelle Monáe, headliner Childish Gambino, and guest appearances by Cardi B and Selena Gomez during DJ Snake's "Taki Taki," a fire broke out at the campground.

Apparently, according to several witnesses who were dozing off on the campsite, it was an explosion that caused the fire which began to blaze at around 2:00 AM. The specific spot that the fire burned down were the mobile showers provided by the festival organizers.

WHAT IS GOING ON!!! THERE IS A HUGE FIRE AT THE COACHELLA MOBILE SHOWERS!!! #Coachella #Coachella2019 #FyreFestival pic.twitter.com/d0DrI4TJym

the explosion was about 60ft away from our tent... all seriousness this wasn’t a cool thing to wake up to. Took this as we ran away #coachella #fire #explosion pic.twitter.com/WIrZzLm2PA

According to the CAL FIRE and Riverside Fire Department, the shower unit that exploded was located near the center of the venue. And while two trailers have been affected (one damaged, and one totally destroyed) by the fire, by around 2:28 AM the fire crews were able to contain the flames, and no guests were harmed by the accident.

It looks like the curse of Fyre Fest continues to haunt other music festivals. Just last month, in addition to logistical problems with transportation, a fire had also broken out at the 2019 Ultra Music Festival. Attendees of the EDM fest dubbed it "Fyre Fest Lite."

So far, this literal fire is the only blip that's happened this first weekend of Coachella. Hopefully no more surprises come the attendees' way — except, you know, major surprise guest appearances. Saturday's headliner is Australian psychedelic music band Tame Impala, while Ariana Grande is set to headline Sunday's show.