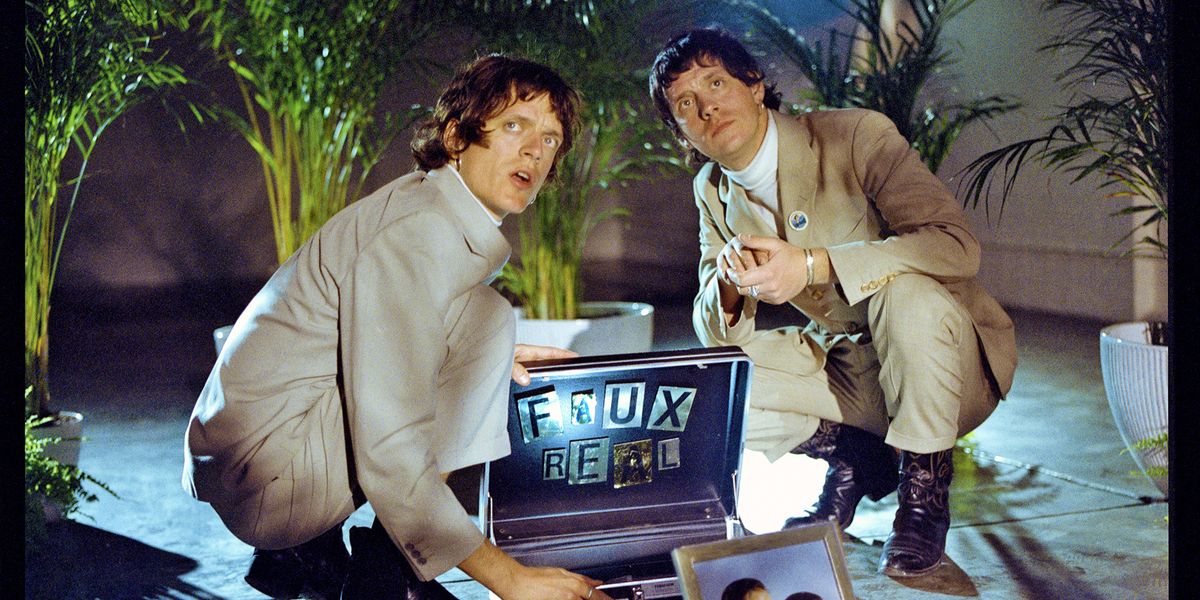 In a time when we're living our lives online, it can be difficult to find someone who truly gets you. As a band formed by two brothers, Elliott and Virgile Arndt, Franco-American duo Faux Real knows a bond like this is irreplaceable. Their new track, "Kindred Spirit," premiering today with a music video, acknowledges this by exploring how deep connection to the Earth is integral to welcoming your authentic self into the world.

The groovy anthem that blends elements of post-punk, glam rock and psychedelia is off Faux Real's forthcoming, self-titled EP, out May 1. While putting the soulful, harmonized vocal talents of both members on display, the song also highlights their brotherhood in its lyrics alongside jangly electric guitar solos and infectious synthesizers.

The video opens with Faux Real dancing in front of a mountain while sporting white briefs adorned with fringe and gold bull decorations. The two are then shown in matching shirts as they sing about a bond only they know. "Half the time, I'm in my mind," they sing, completing a synchronized dance. "The other half we're intertwined."

Faux Real's surreal lyrics often personify mountains, water and other elements of nature. They tell a narrative of being true to yourself, and doing so with the help of everything from a "candid mountain" to a "stony sibling" and a "spiky cousin" — things that are natural and connected to the environment.

"I got another one of me somewhere inside," the two sing as scenes (and their fabulous monochromatic, sequined and vintage ensembles) transition. "Someone who doesn't want to hide." You'll see everything from throwback shag cuts to sleek shades in the video. Perhaps they serve as each other's style icon, as well.

At the climax of "Kindred Spirit," the Arndts burn a photograph of themselves while speak-singing the words, "Kindred spirit, spirit animal, animal kingdom, kingdom come." Scenes play with duality until the conclusion, abruptly changing in connection with each beat drop. One minute, the brothers are depicted under teal lighting surrounded by trees and then, in an instant, they're flaunting all-black outfits with a fiery backdrop behind them.

Recognizing a similar soul (and creating music with them) is something Faux Real prides themselves on, and it helps them produce psychedelic bangers you'll want to turn up and dance to in these increasingly strange times. Stream "Kindred Spirit," below, and mark your calendars for May 1, when more music from this duo is set for release.