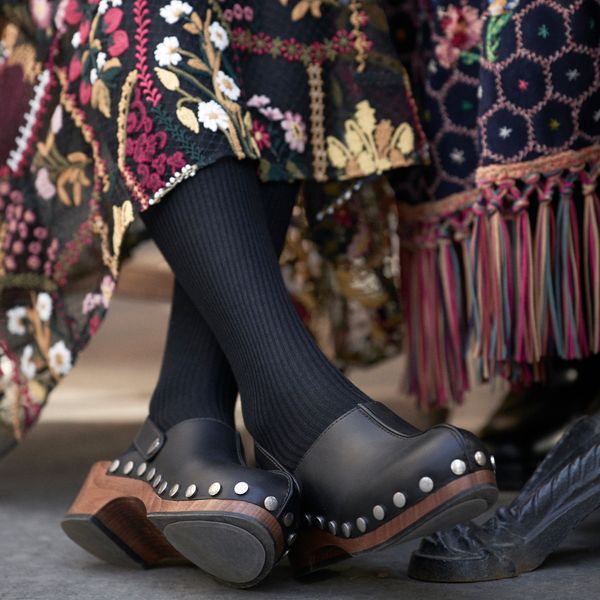 Dior Makes a Serious Case For the Clog

For decades, Christian Dior has been synonymous with the stiletto. Supposedly invented by Roger Vivier in 1954 (Salvatore Ferragamo and André Perugia have also lain claim to the razor-sharp heel) the shoe remained a pillar of the Dior codes through creative directors from Marc Bohan, who showed his collections with block-heels in the 1970s, and Raf Simons who introduced "Diorthopedics" — the intricately embellished mesh sneakers from spring 2014 haute couture.

Since the beginning of her tenure as Dior's artistic director in 2016, Maria Grazia Chiuri has eschewed the stiletto; most shoes under her reign have measured at 3.5 inches — 4 at most. The designer has instead focused on arming women with easier, grounded footwear (as one would expect — female designers are often more sensitive to the realities of towering heels). This fall, Chiuri has stocked Dior boutiques with the "Diorquake," a riveted leather clog that takes its name from "youthquake," the Diana Vreeland-coined term for the 1960s, a decade defined by rock-and-roll, the sexual revolution, and collapse of the class system all propelled by young people.

Appearing for the first time since 1954, when Monsieur Dior showed Roger Vivier's cream-colored clogs with a Hersey kiss-like cutout alongside his spring 1955 collection, the style has reemerged as a tough contender for its pointy, five-inch-plus counterpart. Though Chiuri's iteration has a more provincial, Dutch look, it's svelte enough (and conducive to our current obsession with ironic-chic dressing) to appeal to style mavens that want a boost without being debilitated.