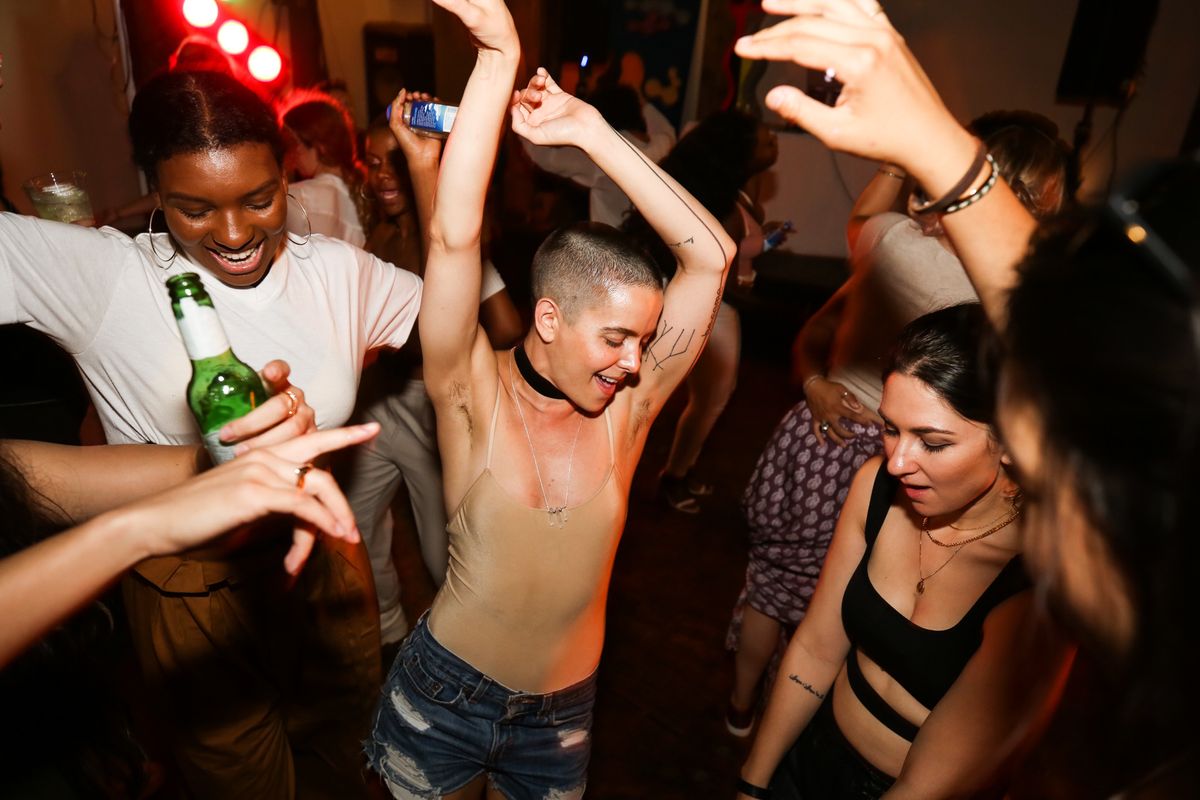 When my editor asked me if I wanted to go to the Hamptons for a 'lesbian party,' it's safe to assume my next breath was a hard yes. Not only did my immediate response stem from a dream I had a few nights prior but I had also followed Ellis, the organization hosting the event, on Instagram for awhile. "Invite-only events to celebrate the curious, fluid, interesting, and interested women of NYC," their bio reads. My interest was peaked.

But when the day came, I had my reservations about attending the trip. Between my violent hangover and my affinity for alone time, I wasn't sure how in place I'd feel with a group of gay girls who likely already knew each other. And as most lesbians have felt once or twice or always, the queer community can occasionally be ostracizing or hyper-competitive. But thankfully this wasn't the case at all.

After immediately being embraced by event co-founders Jane Goldstein and Blaire Preiss, I noticed everyone's attitude mirrored theirs. Women who came in couples, women who came alone, all welcoming and warm and well-intentioned. It was the first time I found myself in a group of women where I didn't have to guess if they were gay (a difficult and exhausting game to play). Despite a brief torrential downpour and a bus getting stuck in the mud, the night was nothing less than celebratory. Food, dancing, a fire pit and an abundance of alcohol and whole lot of lesbians. So yes, it was the dream I had a few nights prior.

The words "invite-only" or "exclusive" can often sound ostracizing and rightly so. And even though these things are accurate descriptors of Ellis, it's reassuring to know the origins of the event series is wholly rooted in wanting to curate a safe space for queer women. "The reason we keep it 'invite only' is because it allows us to know personally everyone who shows up. We are aware of every person who is coming and who they are suggesting so we're able to be more personally aware of who we have in the space." Blaire tells me.

Ellis was started "selfishly, to make friends" (fair) but more importantly to create and provide a deep and strong sense of community amongst queer women in New York. A lot of the queer nightlife felt limiting and surface to the two couples who created Ellis — Blaire Preiss and Jane Goldstein, and Kelsey Hunter and Sage Fuchs — so they simply sought out a solution for the deficit they found.

Unfortunately, many spaces for queer women can feel exclusionary (read: rich/white/cis). When I asked Blaire about Ellis' efforts to remain inclusive she told me, "We want a diverse community as possible… We've been trying to work with our language when we explain Ellis to be more inclusive to the trans community and those who identify as gender non-binary. We want as many stories to be a part of us. We don't want the one story of this kind of person."

Your average Ellis event isn't in the Hamptons, but their monthly events vary from rooftop parties to movie nights and open mic's. Ellis doesn't have just one home. The traveling party series reclaims all the spaces that it occupies… even places like the Hamptons. If you're a queer person in NYC searching for your next favorite party series, look no further.